If I Only Had a Heart

This year marks the 75th anniversary of one of my most favorite movies, “The Wizard of Oz.” When we were kids, the Wizard of Oz was shown on TV once a year and we never missed it. 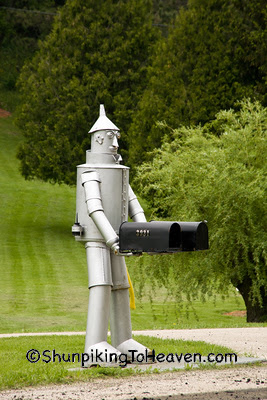 The world premiere of this Hollywood classic didn’t happen in Hollywood. It happened in the Wisconsin town of Oconomowoc in August, 1939. Many other great movies were released that year, such as Gone with the Wind and Wuthering Heights.

After investing $2.7 million in the Wizard of Oz, MGM was worried it might turn out to be a failure, so they launched it in Oconomowoc a few days before its big premieres in Los Angeles and New York City. 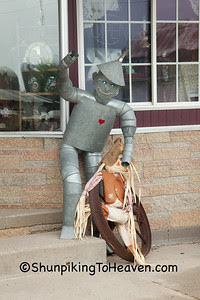 Meinhardt Raabe, the Munchkin Coroner who declared the wicked witch dead, was from the Oconomowoc area. The Tin Man, played by Jack Haley, traveled with Dorothy to Oz to ask the great and powerful wizard for a heart. As we’ve traveled the backroads of Wisconsin, we’ve stumbled upon a couple of Tin Man sculptures, which have delighted us and reminded us to stay light-hearted.

Early on the morning of July 5, 2014, after visiting Old Fort Winnebago Cemetery near Portage, Wisconsin, we decided to travel along Old Military Road. This road was built for the transport of supplies and for communication between Fort Howard, near Green Bay, Fort Winnebago, near Portage, and Fort Crawford near Prairie du Chien.

Along this road, we discovered an interesting gravestone, which was a bit of a mystery until we did our research later. State Rights was the name of a racehorse owned by Chauncey L. Roberts. This champion horse was a Hamiltonian bay stallion born in 1861, around the beginning of the Civil War. 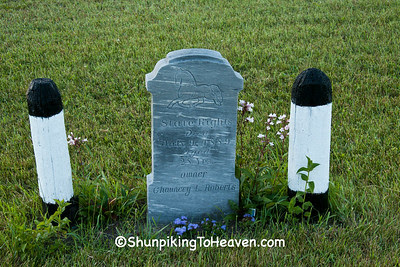 Chauncey trained his favorite horse to run the mile in two minutes and twenty seconds and the two of them were a familiar sight at county fairs and exhibitions. On July 9, 1889, Chauncey entered State Rights in a race in Racine, Wisconsin. State Rights, who was still winning blue ribbons at the age of 28, fell dead on the track. The heartbroken Chauncey brought his beloved horse’s body back to Fort Winnebago and dug a grave large enough to have the horse buried standing up. If you ever get the chance to meander along the Old Military Road east of Portage, Wisconsin, watch for this unusual gravestone.