Last June, we took a two-day trip to our neighboring state of Iowa. We spent the first day photographing farms in the Dubuque area, which were on the Iowa Barn Foundation’s spring tour. The area along the Mississippi River is one of our favorite places to photograph, with its rolling hills and verdant valleys. We started our second day in the St. Donatus area, which we will cover in a future blog post. 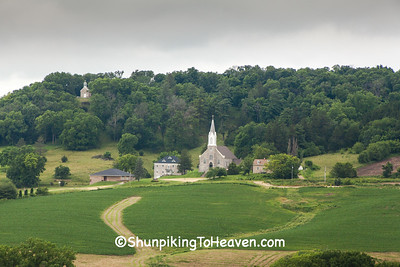 After spending the entire morning near St. Donatus, we headed to the beautiful small town of Bellevue, which is situated along the Mississippi River. The main reason for our visit there was to capture some photos of the railroad tracks that run down the center of the street, with one lane of traffic on each side of the tracks. 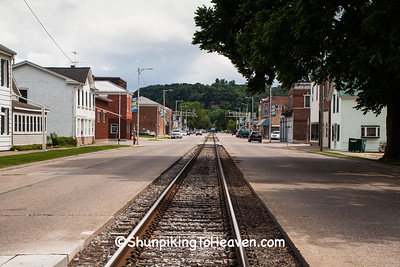 After locating the tracks and a place with historic buildings to add to the ambiance of the photos, I parked the car alongside the tracks and took my equipment out of the car. It had been raining on and off for the past hour and a big black cloud loomed overhead. 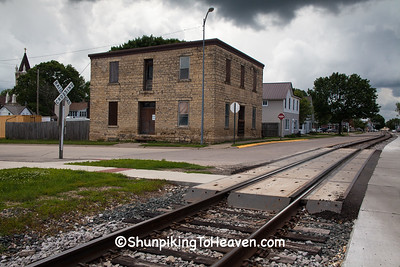 After hurrying to capture several photos of the tracks, I began to focus on a large two-story limestone building that was on the corner near where we had parked. It was a beautiful building with large doors on the front of both floors of the building. 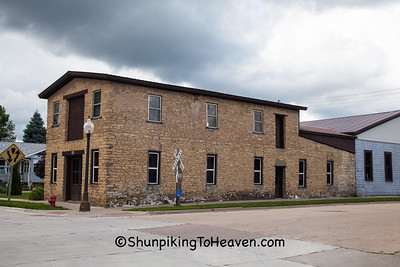 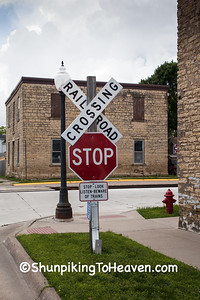 On the side of the building opposite the corner, there were two attached buildings that were both very interesting. The largest one was sided with pressed tin and the smaller one was tile. I only wish I could figure out the purpose of each of these buildings from long ago.

As I stood there wondering about these buildings, I heard a train whistle in the distance. So, I turned my tripod around and hurried to point my camera lens down the tracks. The train was moving very quickly. 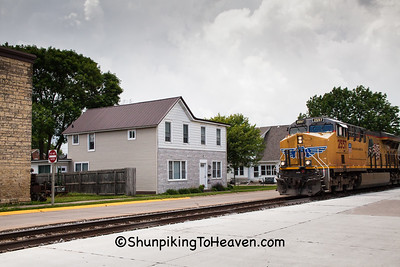 As the train approached the corner where I was standing, the engineer blew the whistle, which was ear-splitting. And the train was moving so quickly that I only had time to capture two photos of the diesel engine.

As Ruth sat in the car and I stood beside the tracks, the ground shook and the wheels bumped, squeaked, and squealed along the tracks. We should have counted the freight cars because they continued to pass by us for a very long time.

At the time, I didn’t know what the term was for this type of railroad track. So, I needed to do a little research before writing this blog. According to Wikipedia, “On-street running or street running is the routing of a railroad track or tramway track running directly along public streets, without any grade separation. The rails are embedded in the roadway, and the train shares the street with pedestrians and automobile traffic.” 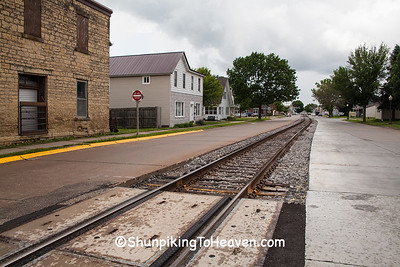 As I reviewed my photos to put together this blog post, I lamented the fact that I didn’t take a short video of this interesting experience. And then Ruth reminded me that I didn’t do that because I was too busy plugging my ears to avoid hearing loss. My hearing is one of my most precious possessions, so I guess it’s okay that I ended up with my hearing intact rather than a video!

On April 28, 1868, according to an entry in the journal of James O. Crosby, a cable car containing 3-5 tons of quarried limestone creaked and bounced along a set of wooden rails as it was lowered from the top of the bluff to the banks of the Turkey River. As it moved slowly down the side of the bluff, an empty cable car was pulled back up to the top.

Crosby was an attorney and surveyor who platted the once-thriving town of Motor in the northeast corner of Iowa, along with starting a school and attempting to establish a post office. He was also a quarter owner of a six-story limestone grist/flour mill, known as Motor Mill, and a construction engineer during the building of the mill.

The mill was built beside the Turkey River with the limestone that was quarried on top of the bluff. German stonemasons were hired from surrounding towns to dress the stones, cutting them into suitable sizes and surfaces. Then the stones were layered to create foundation walls that were five feet thick. Locally harvested oak trees were used to create enormous support beams. When the walls were complete, they towered 90 feet above the banks of the river. 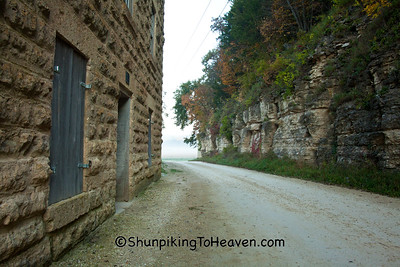 Operations began at the mill in the fall of 1869. They ground barley, oats, and rye for livestock feed, corn for cornmeal, and wheat for flour. Motor Mill was soon very successful, so other buildings were built to support this thriving business. A limestone cooperage was built near the mill where wooden barrels were made to store and ship flour and corn meal. 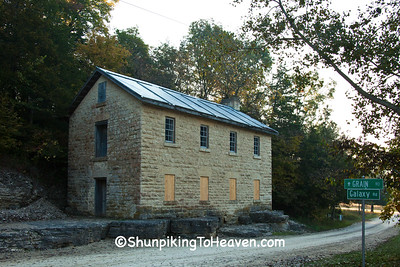 A limestone inn was built, just down the road from the mill. It was used by travelers and workers. It also served farmers who came to have their grain ground at the mill.

Next to the inn, a stone livery stable was built to care for the horses of the people staying at the inn. 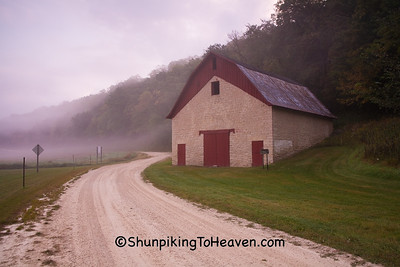 On the other side of the inn, a limestone ice house was built to store ice blocks that were harvested each winter from the Turkey River. The ice blocks were used in the warmer months to refrigerate food. 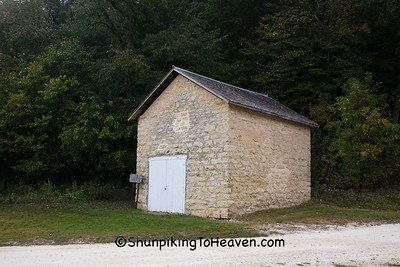 In 1899, a Pratt Through Truss steel bridge was built across the Turkey River between the mill and the cooperage. It replaced the original high-sided wooden bridge that was built in 1868. 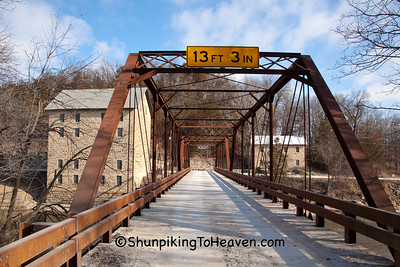 Despite the booming start to this historic mill and the town of Motor, the mill closed after only 14 years of operation. The closure was caused by several catastrophic events. Cinch bugs and droughts destroyed local wheat crops. Farmers began switching from wheat to corn, cattle, and hogs. The construction of a narrow-gauge railroad, which would have eased the transportation of raw materials and products, was never completed due to flooding, which also damaged the dam. And, worst of all, there was friction and disagreement among the mill owners.

In 1903, the Motor Mill property and buildings were purchased by the Louis Klink family, who converted it to a farm. They removed the milling equipment and some of the flooring to make room for the storage of hay. The other buildings were also used to store hay and grain. And for a while, draft horses were stabled on the first floor of the mill. 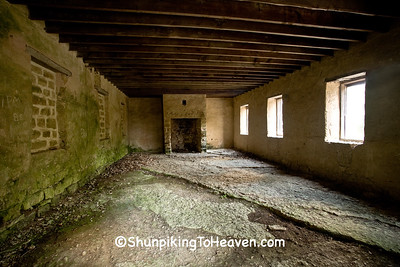 Eventually, the livery stable was modified to serve as a dairy barn. For 80 years, the Klink family farmed the Motor Mill site. In 1977, recognizing the historical significance of the site, they nominated it for the National Register of Historic Places. In 1983, the Klink family sold the buildings and 100 acres to Clayton County. In 1992, the county acquired another 55 acres.

In 2004, the Motor Mill Foundation was created, with a mission “to protect and preserve the architectural integrity, history, natural beauty and serenity of the Motor Mill site and its surroundings.” Motor Mill Historic Site is open year-round. However, the buildings are open only for tours and special events.

In the fall of 2019, Motor Mill Historic Site celebrated its 150th anniversary. If you ever get the chance to visit, you won’t be disappointed!