I just discovered that November is Historic Bridge Awareness Month. So, I decided that before the month is over, I would sneak in a blog post about the beautiful and historical John A. Roebling Suspension Bridge. 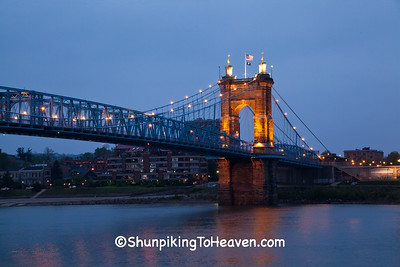 The Roebling Suspension Bridge spans the Ohio River, connecting Cincinnati, Ohio and Covington, Kentucky. When it opened to traffic on January 1, 1867, it was the longest suspension bridge in the world. It held this title until 1883 when it was surpassed by the Brooklyn Bridge, Roebling’s most famous project.

The Roebling Suspension Bridge is impressive in its design and several new bridge-building techniques were used in its construction. The two main cables each contain 5,180 individual wires imported from England. It is an engineering wonder, but the thing that impresses me the most is that it is now over 150 years old and is still serving these two neighboring cities. It is a National Historic Landmark, a National Historic Civil Engineering Landmark, and is on the National Register of Historic Places. 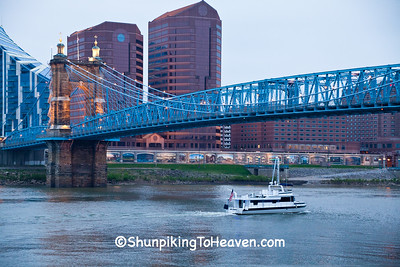 There were many challenges that had to be overcome in the building of this bridge. Although the first charter had been granted by the Kentucky Legislature in 1846, the Ohio Legislature delayed approval due to opposition from ferryboat and steamboat companies. And some people were concerned that the bridge would facilitate the escape of slaves. Construction finally began in 1856 but was held up by challenges from the force of the river, a shortage of funds for materials, flooding, and the Civil War.

In 1867 when the bridge finally opened to traffic, the driver of a horse and buggy was charged a toll of 15 cents to cross; the toll for three horses and a carriage was 25 cents. Pedestrians were charged one cent. Tolls changed over the years and were collected until 1963. Although there are numerous bridges along this waterfront today, the Roebling Bridge continues to carry many vehicles and pedestrians daily. 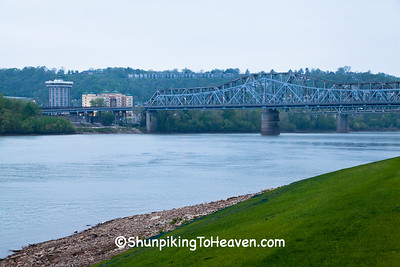 When we visited Cincinnati in April 2016, it was worth it to get up in the dark and drive down to Smale Riverfront Park to see this beautiful bridge lit up against the dawn’s blue sky. 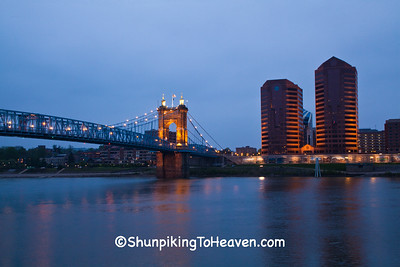 The End of the Great War – A Centennial Commemoration 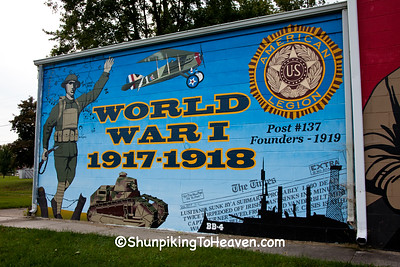 Although the war began on July 28, 1914, the United States did not join the war effort until April 6, 1917. According to the U.S. World War I Centennial Commission, 4,700,000 U.S. men and women served in uniform. More than two million of them fought on battlefields in France under the command of General John J. Pershing.

Over 200,000 Americans were wounded and 116,516 gave their lives in this war. More than 122,000 Wisconsin men and women answered the call of duty, with Wisconsin declaring June 5, 1917 as “Duty Day.” Close to 4,000 Wisconsin citizens gave their lives for their country during World War I. One of these selfless individuals was Guy Loerpabel, who was killed in action in France on May 29, 1918, less than six months before the war ended. He was only 23 years old.

The American troops who were sent overseas to fight in World War I became known as “Doughboys.” The exact origin of this nickname is unknown. In 1920, Ernest Moore Viquesney, the son and grandson of French immigrant sculptors created a doughboy statue, naming it “Spirit of the American Doughboy.” It was reproduced and put on display across the country to honor World War I soldiers. Today, there are still over 100 of these sculptures standing at parks, cemeteries, courthouses, town squares, and other locations.

In remembering those who served our country during World War I, it is my privilege to also give women the honor they deserve. Although women’s roles have been important in all wars, the first time women formally served in our armed forces was in World War I. The largest group served in the Army Nurse Corps, with 10,000 women going overseas and with many of them serving on the front lines. Over 400 women also served in the U.S. Army Signal Corps as telephone operators in France. Back at home, women filled jobs that were vacated by the men who had joined the war efforts.

I also want to honor the many immigrants who served our country during this war. Nearly forty percent of the soldiers who served during World War I were immigrants or the children of immigrants. Their families at home showed their support by buying war bonds and displaying blue star service flags signifying that they had a family member in the armed forces. 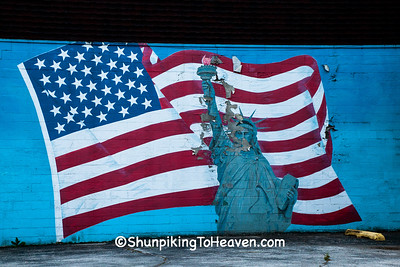 During the war, Canadian Pacific, a North American transcontinental railroad, transported troops, supplies, and equipment for the war effort. The company, which still provides freight transportation services today, will safely halt its trains on November 11 at 11:00 a.m., to observe two minutes of silent respect for our veterans. They will end this tribute with the sound of a long train whistle.

The United States World War I Centennial Commission has called upon all Americans across the nation to toll bells on Armistice Day, November 11, 2018 in remembrance of those who served in World War I. 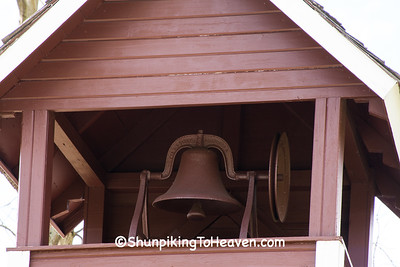 Whether you ring a bell, observe a moment of silence, attend a parade, or say a prayer, please remember to honor those who selflessly served our country in the war that, idealistically, was supposed to be the war to end all wars. 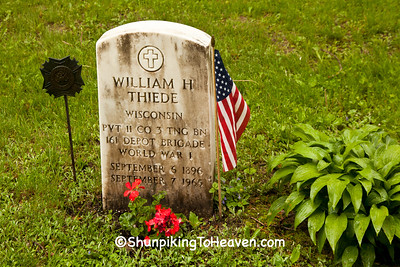