In November of this year, Route 66 celebrates its 90th anniversary. It was one of the first numbered US Highways. 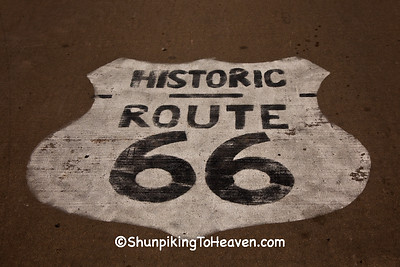 In 1926 a route was planned between Chicago and Los Angeles and was assigned the numerical designation of 66. It was acknowledged at that time that this would be one of the primary east-west routes.

From the beginning, it was intended to connect small towns as well as larger cities with a national thoroughfare. Until this time, most rural communities had no access to major roads. 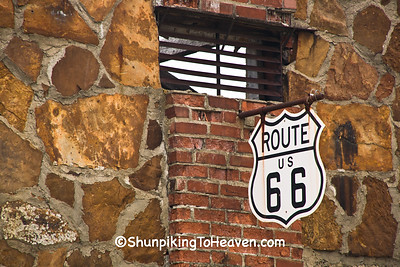 If you can believe it, by 1930 the trucking industry had come to rival the railroad in the shipping of American goods. Route 66 went from Chicago to the Pacific coast over relatively flat prairie lands which allowed for a much more temperate climate. Truckers enjoyed the route and the climate. 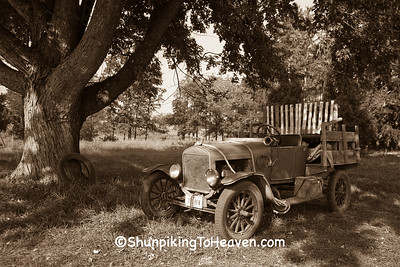 If you’ve read the classic John Steinbeck novel “The Grapes of Wrath”, or seen the 1940 film adaptation, you were introduced to Route 66, “The Mother Road,” as Steinbeck proclaimed it to be. The story is about the Joab family during the Great Depression and the Dust Bowl. When farming becomes impossible and they are losing their land, they pack all of the belongings they can fit on their truck and drive off in the night to look for work in the orchards of California. The road they and many others take is Route 66. 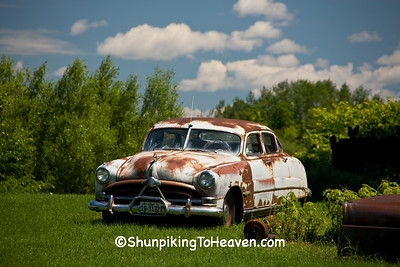 Route 66 inspired the 2006 movie “Cars,” which is about a race car being accidentally stranded in the town of Radiator Springs. The town was bypassed by the interstate and the town and its businesses are languishing without that traffic. In the movie, the car known as “Doc Hudson” is a Hudson Hornet like the one in the above photo.

This same thing happened to many businesses along Route 66. The original alignment went through the center of the cities and towns along the route. After World War II, traffic increased making this route very dangerous. The road was narrow, crossing railroad tracks at grade, and had many blind curves and cross-traffic. During this time, many sections had the nickname of “Bloody 66.” 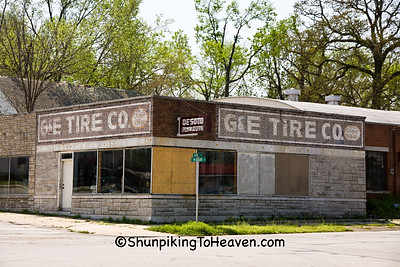 In the 1950’s there was a sharp rise in tourism and Route 66 was the major highway for vacationers heading west. The road passed through the Painted Desert, and came close to the Grand Canyon. Tourist cabins, motels, diners, and gas stations along the route all flourished. 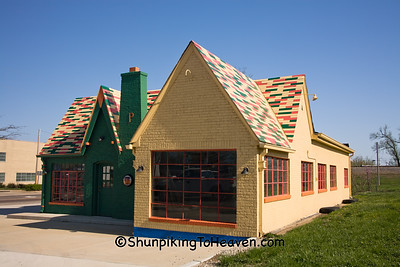 Route 66 was realigned multiple times and with each realignment, businesses along the former routes lost tourists. Some businesses closed; others managed to hold on.

Finally, in 1985, the entire route was covered by Interstate alternatives, and the highway was officially decommissioned. Even though it has been officially nonexistent since that time, it remains more popular than ever. People travelling the country are looking to get off of the interstate which doesn’t provide the character of the states being travelled through. Groups in every state were established to promote the route and hopefully maintain many of the businesses along the route.

If you travel the route, and visit the local businesses, you can meet many characters, as we did at Gay Parita in Missouri when we spent time with Gary Turner. We are so glad we did, as Gary passed away in 2015. Luckily, this is one business that will survive, as Gary’s daughter Barbara has moved home and reopened his beloved station. 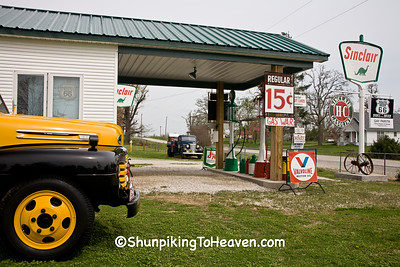 Unlike our older sister Phyllis, who travelled the entire route with her husband in their Corvette, Joann and I have only travelled portions of Route 66 in Illinois and Missouri. We hope to travel more of the route in the coming years. Future blogs will detail our experiences along those portions we have travelled. Stay tuned. 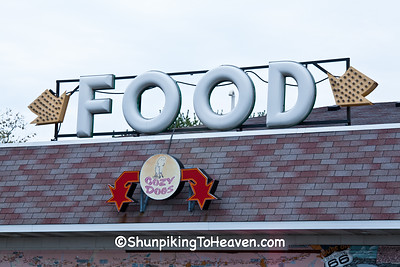 If you can, plan a vacation along the route to celebrate her history. Be prepared with a good map, as sometimes it’s hard to follow the route through cities, or know when you have to get onto the interstate for a small stretch where the original route is under the current Interstate. Patronize local businesses whenever you can because every year more are lost. And most importantly, have fun!

On a road near my home, a road that I take on the way to almost everywhere, there is a very large family farm. About three years ago, a dented silver tank (possibly a milk tank) appeared in the weeds at the edge of the farm buildings. It made me smile because it seemed to have a rather sad face, along with a nose ring. After driving by it for over a year, I finally stopped to take a few photos of it. That was two years ago and the sad-faced tank is still there.

After taking that picture, I got to thinking about how many times Ruth and I see faces on the structures we photograph. When the faces are painted on the structure, they are almost always happy faces, like the one on this barn.

Or the one on this big steel tank.

Or this iconic yellow smiley face on a water tower in Eagle, Wisconsin. 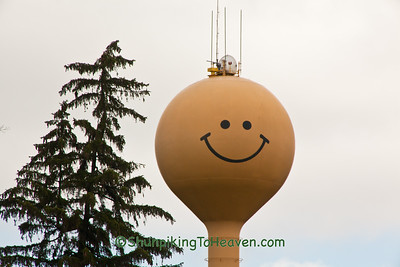 But the faces we see that are made up of windows and doors and missing boards are the most fun for us. Maybe you’ll think we’re crazy, especially when we stretch the imagination, but creativity and seeing what others don’t see is what gives us the most satisfaction. Here’s a barn with a missing board or two that makes for a stream of tears coming from the “eye” on the left.

I think the most fun is to put words to the expressions on the faces. Here are a few of my favorites:

“Would you guys stop squeezing so hard? I’ve got a headache!”

“Nobody seems to care about us old barns anymore. I mean, look at my roof!” 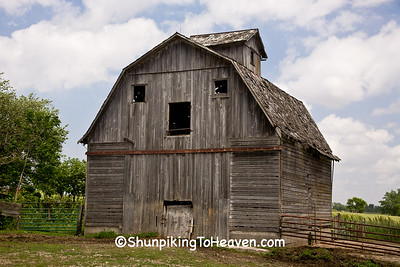 “I’m watching you, so don’t think you can get away with something!” 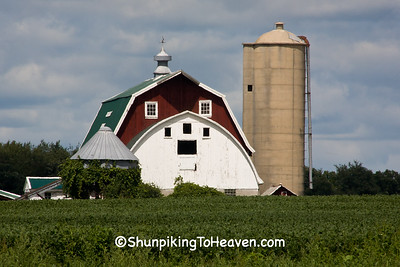 “Jimmy, you get back in here and clean your room. I’m not going to tell you again!”

I hope you’ve enjoyed these places with faces. I’ll leave you with this optimistic thought: 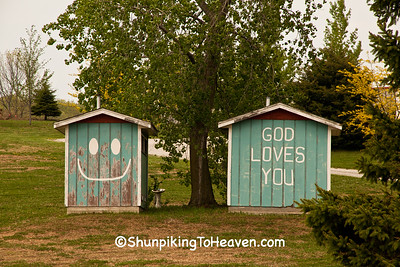