It's a Small World

Autumn of 2011 was a disappointment to us because there seemed to be eternal sunshine, which makes for difficult photography due to harsh shadows and washed out colors. So Ruth watched nearby weather reports and it looked like we might find some overcast conditions in Minnesota. We then quickly planned a three-day trip to the Southwest corner of our neighboring state. 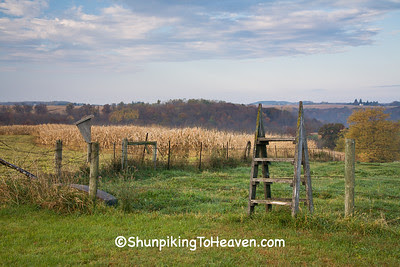 Unfortunately, it was very sunny there, too, but we made the best of it and we always took advantage of first light, which is soft and even. On the third day, we arose early and, after photographing a few lighted subjects in the town of Spring Grove, we headed for our beloved backroads. As we drove slowly along a gravel road that was high on a ridge, I told Ruth that we probably should have been there a week earlier. It was still a beautiful view, but many of the leaves had already fallen or been blown off by the wind and the colors were rather muted. Sitting along the side of the road, however, was an old green Oliver tractor that beckoned to be photographed. 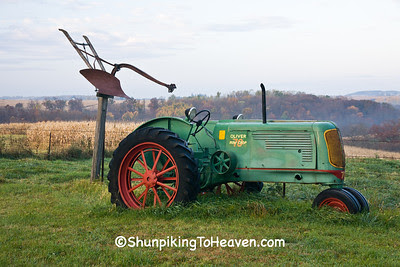 I parked the car on the side of the road and started to take my camera equipment out of the back seat. And then I heard a loud voice coming from a man who was descending from the house up the hill from the tractor.

“Yeah, we were just saying that a minute ago,” I responded.

“It was beautiful here about a week ago, before the wind and the rain came through,” he said.

As we talked, I noticed a set of steps that would allow someone to climb over the fence into the field, which would eventually lead to the valley below. There was also a sign that said, “HARTland (Hunting, Access, Recreation, and Trespassing). At the bottom, it said, “Tom and Betty Sawle.” So I asked him what the sign meant. He explained that he was more than happy to let people hunt or hike his beautiful land, as long as they asked permission first. What he didn’t appreciate was trespassing. 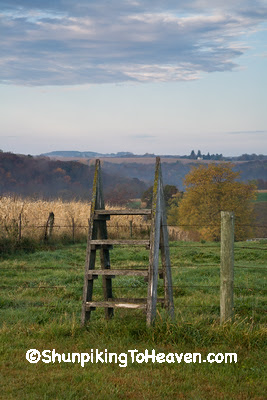 Then Tom asked me where we were from. I told him we were both from the Madison, Wisconsin area.

“You’re from Hyde?” I asked, as it suddenly dawned on me that his last name was Sawle. “We go to Hyde all the time to photograph Hyde’s Mill. Are you related to Ted Sawle?” 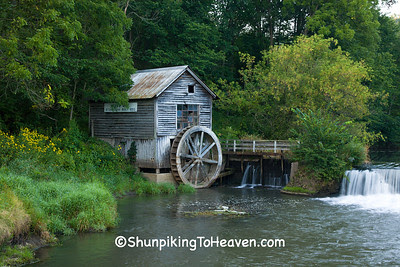 “Wow, it’s a small world,” I said. “I met your dad back in 1996. He was very kind to me and my family and he took the time to tell us about the mill and to show us his antique Oil Pull tractor and all of his antique tools.” 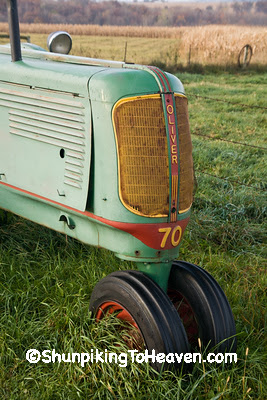 After I finished talking to Tom, I photographed his antique Oliver 70 Rowcrop Tractor and another view or two of his land. Then we headed on down the road. 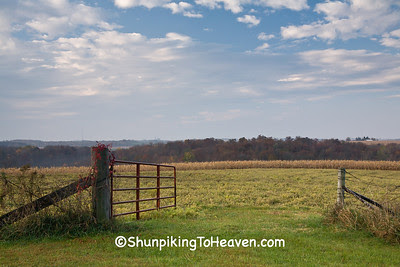 A couple weeks later, there was a craft fair where I work and I had signed up to show some of my photography. As people mulled around looking at my photographs, a woman named Chris, with whom I had recently begun working, pointed to a photo of the Glade Creek Grist Mill in West Virginia and said, “That’s not MY mill.”

“Your mill?” I questioned.

Chris then told me that Ted Sawle was her grandfather and that she and her cousin had dug stones out of the mill pond to give the waterwheel enough clearance when her grandfather installed it on the mill at Hyde. 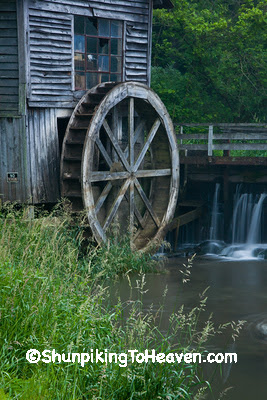 I told Chris about meeting her grandfather back in 1996 and then about meeting Tom Sawle recently in Minnesota and she informed me that Tom was her uncle.

Whenever we’re out on the back roads, no matter which state we travel through, we never know whom we might meet. And, often, it truly is a small world.

All of the older kids in our family attended at least some years of school at a four room Catholic school. One of my favorite memories of those early years was recess. 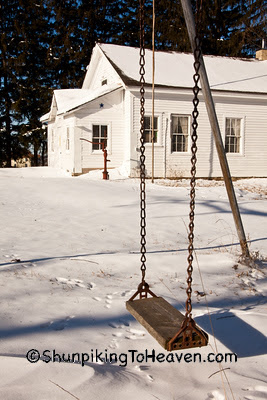 This was a time when children played games at recess that entailed little more than their minds and bodies, and maybe a ball. We played Simon Says; Red Light, Green Light; Fox and Goose; and Red Rover to name a few. We also had the typical playground equipment of the times. 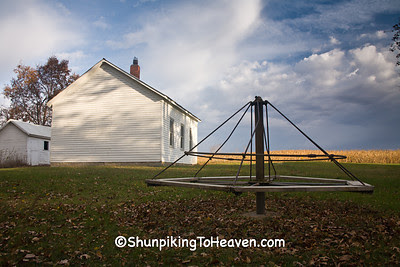 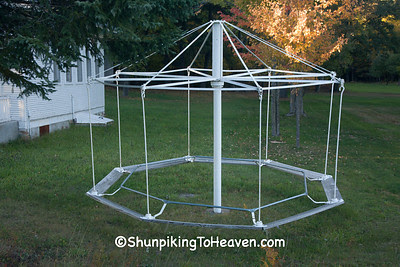 Our merry-go-round was one of the low type, like the one below. Some of the older kids would be the pushers and would push the merry-go-round as they ran along beside it until it was going so fast they could barely hang on. Then they would swing up and sit down while it spun round and round. 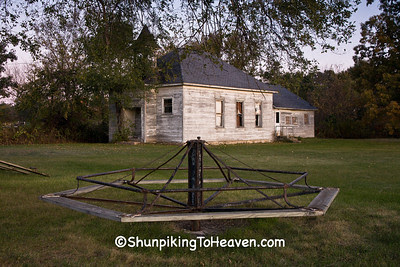 There was a well-worn path around it, and outside of that was the hard lawn. Everyone hung on tight because you didn’t want to slide off and land on the hard ground. 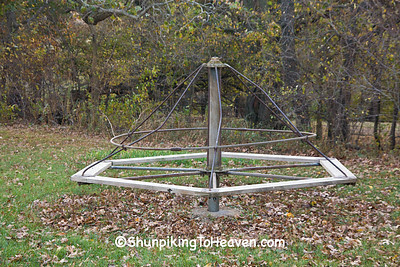 This winter we drove past an active church with an antique merry-go-round in the yard. The snow around the merry-go-round was tracked, so we could tell that someone had been playing. It was a very nice sight to see. 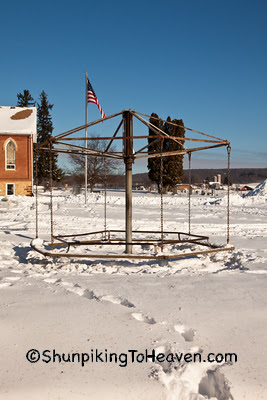 I also loved swinging on the swings. There were two sets of swings on our playground. One was near the ball diamond, and I loved to swing on that one and watch from high in the air as the ball game went on below us. Some of the girls played ball with the boys, but I wasn’t one of them. You had to be pretty good to be accepted on the teams with the boys. 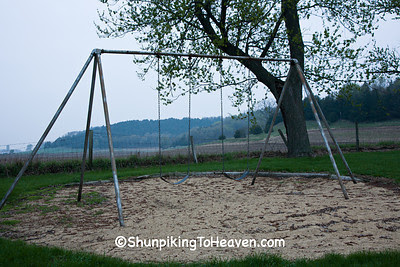 Imagine our surprise when we found this swing set in Michigan right on the shores of Lake Michigan. We envied the kids as they swung on the swings, but their joy was contagious and we were happy to have been there while the swings were occupied. 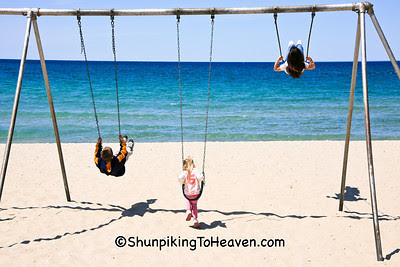 As we travel around, we find these old merry-go-rounds and swing sets at old one-room schoolhouses and sometimes at old parks. 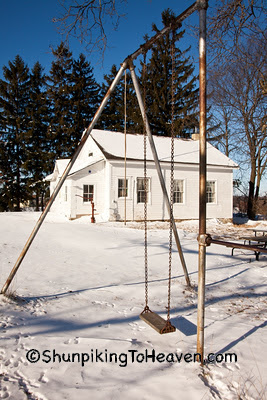 We know we’re lucky to find them these days because safety and insurance concerns have towns removing them to eliminate their liability.

If you drive by any old schools, look around the schoolyard. You might see some old playground equipment sitting silently nearby.

In January of 2011, we had new-fallen snow, so Joann and I decided to head west to Sauk and Richland Counties. We have covered so many of the roads in these counties, but the scenes along every road look different depending on the season. 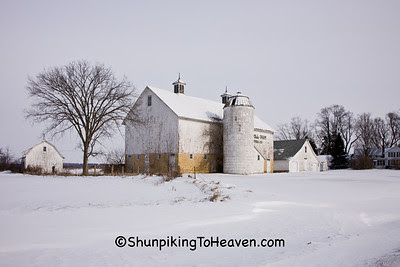 As we drove around, we passed an old farmstead that was no longer being used. The farm had a for sale sign in the front, but we could tell no one was living there. 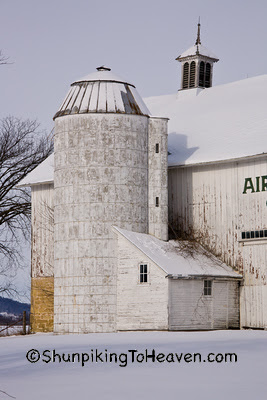 The farm was beautifully maintained, and the snow was pristine. Since no one was living there, the driveway was unplowed and no tracks marred the fresh snowfall. 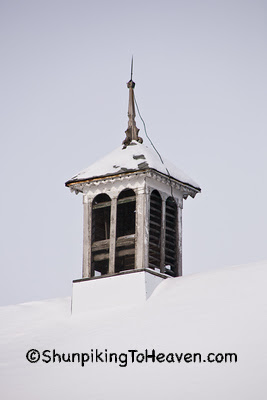 The farm had one silo next to the barn with an interesting silo room attached. For some reason, we hadn’t paid much attention to silo rooms until recently. What a treat it was to find this one! 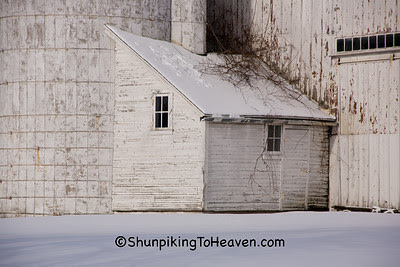 Without the machinery, cattle, plowing, and tracks of a working farm, it looked like an idyllic place to live. I don’t know what Joann thinks about as she takes her photographs, but I was looking around the farm and wondering what it had been like to grow up on this gorgeous farm. 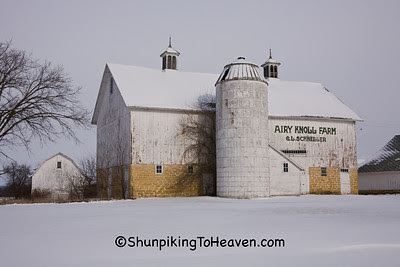 We could tell how much the owners had loved this farm. So much so that they had given the farm a name and proudly displayed it, as well as their name, on the barn. 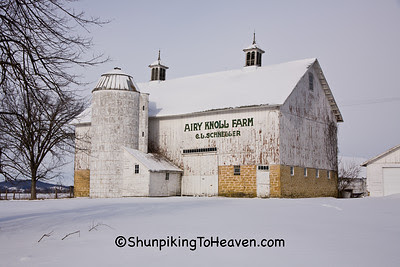 We don’t know what circumstances caused the farm to be put up for sale, but we hope the next owners love it as much as the family that gave the farm its name of Airy Knoll Farm. 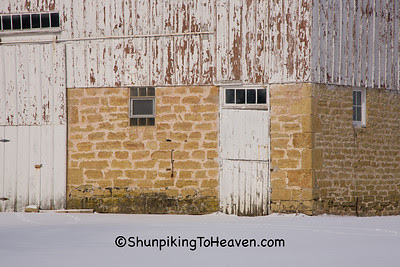 With more snow on the way, it’s hard to believe that winter is almost over. We have to believe that and just try to enjoy the snow that comes our way until spring finally makes an appearance.