Back in October 1997, Ruth and I spent some time photographing in Jefferson and Waukesha Counties in southeastern Wisconsin. Near the town of Dousman, I photographed a set of small limestone buildings. This was early in our backroads adventures when we were still photographing mostly barns, but these buildings were too interesting (and fancy) to pass up.

Due to the high cost of film and processing at that time, most subjects were recorded with only one or two images. And all the images captured over 20 years of film photography must be digitally scanned to make use of them. The image below is one of the few images I captured that day of these unusual limestone buildings. It was also early in the availability of internet resources, so we didn’t know much about them.

Fourteen years later, in October 2011, we again did some photography in Jefferson and Waukesha Counties and decided to go back to Dousman. As we left Dane County and crossed into Jefferson County, we stopped to photograph a wonderful old gambrel-roof barn with a field-stone foundation. 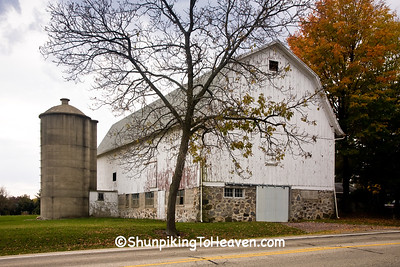 Because buildings that are left to the elements of the weather and the way that nature tends to overtake rural buildings, we didn’t know if the limestone buildings would still be standing when we got there. To our surprise and delight, all three buildings were still intact, and the lawn was still being mowed around them. Also, some of the shrubs had been removed or trimmed back. And now, with all the resources of the internet, we have a bit of history on these wonderful buildings.

In the autumn of 1836, thirteen years before Wisconsin became a state and 175 years prior to this visit, New England pioneers, Elisha and Belinda Edgerton traveled a narrow dirt trail in an ox-drawn wagon to the Dousman area. Locals called this area "Bullfrog Station" because of the surrounding bogs and marshes. Elisha cleared the land, which included a natural spring, and built a log cabin and several farm buildings. Some of these buildings, including the three we photographed, were built from locally quarried limestone.

The largest and loveliest of these three remaining buildings was a Gothic Revival carriage house, built by Elisha in 1856 to house his horse-drawn carriages and wagons. But his wife, Belinda, had a hand in making it a most unusual carriage house because she persuaded Elisha to turn the upper floor into an Episcopal chapel. In this little chapel, which Belinda named St. Maria’s, students and faculty from the Nashotah mission, an Episcopal, Anglo-Catholic seminary located an eight-mile walk from the chapel, conducted Episcopal services for the early settlers. And it was there that the congregation of the current St. Mary’s Episcopal Church of Dousman originated.

According to a publication entitled “Transactions of the Wisconsin State Agricultural Society” for the year 1860, the building next to the carriage house was a dairy building of some kind. A 1930 survey identified this building as a storage barn.

The third building was identified as a smokehouse in the 1860 publication and as a smokehouse and toilet on the 1930 survey. There had also been a fourth and larger limestone building that was identified as a granary in the 1860 publication. And, according to the Architecture and History Inventory of the Wisconsin Historical Society, up until the late 1970s, these four limestone buildings had been connected by a shed roof arcade.

In 1860, the State Agricultural Society recognized the Edgerton farm as a Wisconsin Premium Farm. They described the farm as 820 acres of excellent land. And they said, “In the management of this farm, and in all its appointments, we see the practical, the skillful, and the systematic farmer. Mr. E. does everything upon a perfect system, keeping an account of every action, and its result. He is now, while in the prime of life, reaping the full benefits of having devoted his early years to the thorough cultivation of his own soil, and of his own mind. May he long live, and may his example and success stimulate the young men of the State to go forth, take up the rich, uncultivated lands, and do likewise.”