A Kentucky Mail Pouch Barn (With A Bonus)

In May of 2010, our return trip from North Carolina did not follow the most direct path. It followed a path that would take us past several famous mills. We first visited Mabry Mill on the Blue Ridge Parkway, and then we stopped at Glade Creek Mill in West Virginia. After these stops, our route would take us through parts of Kentucky we had not been to before. 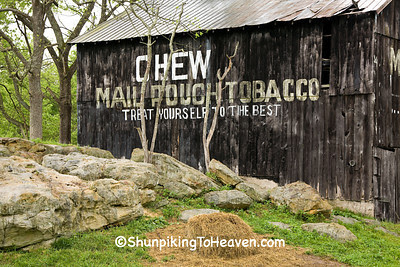 Along the route, we found a Mail Pouch barn where the signs had been repainted. The original signs were too faded for the lettering to be refreshed exactly, but it is still a cool old barn. 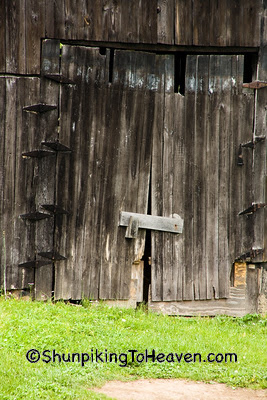 This barn had the advertising for Mail Pouch Tobacco on one end and one side. It’s interesting to visit these barns and see the different variations. Some have the ad on one side, some on two, and one in West Virginia has been reported as having an ad on all four sides. 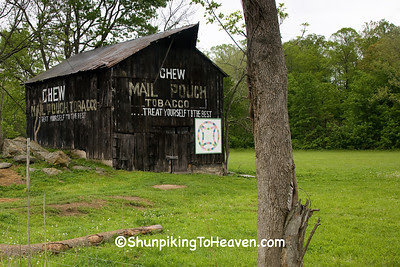 By the time we stopped at this barn there was a light rain starting and as Joann took photos of the barn, a donkey came from behind the barn. 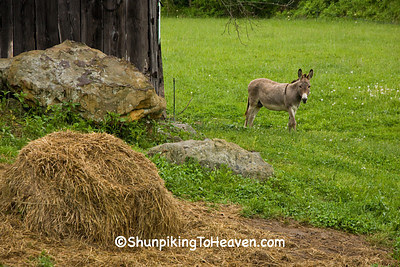 This donkey had one ear that would flop down, and Joann was lining up her shots and then whistling, snapping her finger, and dancing around to try to get both of the donkey’s ears up for the picture. Sometimes she was lucky enough to get both ears up and the picture snapped before the one ear flopped down again. 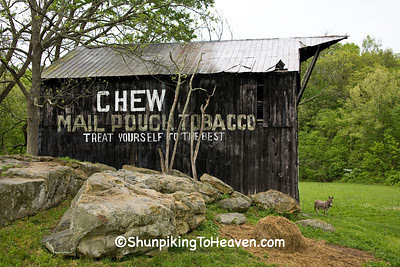 The barn also boasts a quilt square. Quilt squares on barns were started by Donna Sue Groves in Adams County, Ohio. Today there are at least 27 states with Quilt Barn Trails. The quilt square on this barn is a double wedding ring pattern. 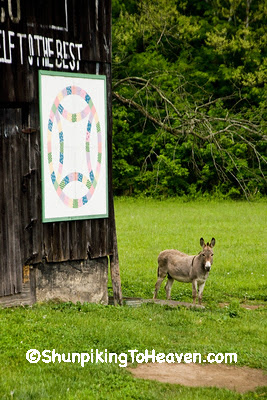 We couldn’t help but wonder if the donkey was aware of the picturesque setting in which he was grazing. Both Mail Pouch barns and Quilt Barns draw tourists and photographers. He probably just enjoys the company. 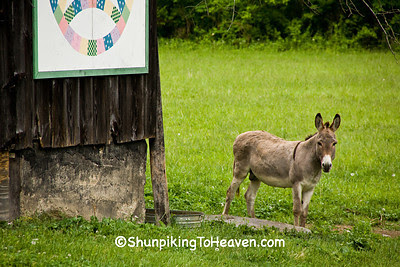 What we enjoy is hunting up these barns. In our area, quilt barns are easier to find, but we really enjoy our trips to states that have Mail Pouch barns. We try to hit as many as we can on those trips. As the Mail Pouch ads fade and the barns fall, they are becoming harder to find. When you’re out on the backroads, enjoy any of these barns you find. You never know how long they will be standing.

Posted by Shunpiker at 7:57 PM No comments:

The Grave in the Middle of the Road

Two years ago, on our way to photograph in North Carolina, Ruth had planned a surprise for me – to visit “The Grave in the Middle of the Road.” We also had plans to have dinner with our friend, Stevie, in Kentucky that first evening. Unfortunately, due to car trouble before we left, we had to skip the grave and were still late for dinner with Stevie. A couple weeks ago, on our way to the Ohio River Valley, Ruth made sure we didn’t miss it this time. 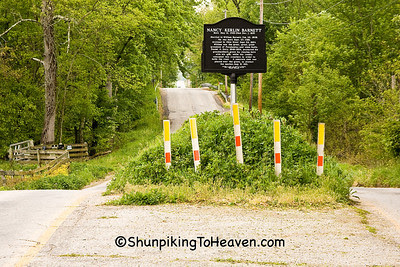 Nancy Kerlin was born May 14, 1793. In 1808, at the tender age of 14, she married William Barnett, the great, great, great grandson of Pocahontas and John Rolfe. Nancy and William had 11 children and they lived in a log cabin near Sugar Creek in Johnson County, Indiana.

Nancy loved Sugar Creek and told her family that, when she died, she wanted to be buried near the creek. In 1831, at the age of 38, Nancy died and her family buried her on a small rise overlooking Sugar Creek. As time went on, other settlers were buried near Nancy, forming a small pioneer cemetery. 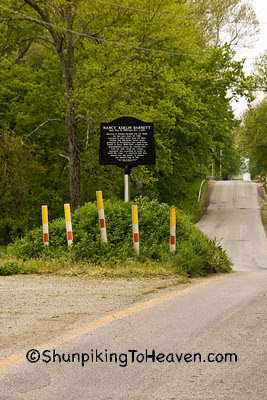 As the years went by and traffic increased on the little country lane that passed the cemetery, the county decided to build a modern road, which meant that the graves had to be moved. According to the historical marker near the gravesite, Nancy’s grandson, Daniel G. Doty, sat at the gravesite with his shotgun to protect his grandmother’s grave. 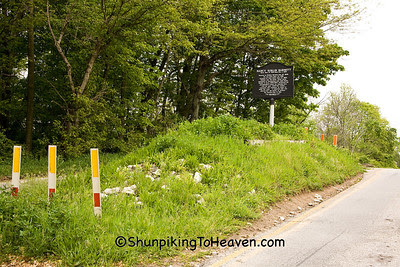 The historical marker, which was erected in 1982 by Kenneth F. Blackwell, Nancy’s great, great grandson, and his son, Richard Blackwell, says the following: 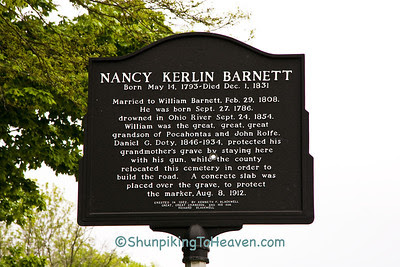 Historical Sign at the Grave in the Middle of the Road, Johnson County, Indiana 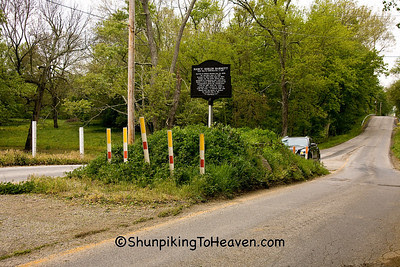 In October of 2009, Joann and I took a short trip to Minnesota. We stayed the night in Lanesboro Minnesota in a small quaint motel. As is our usual routine, we got up early, packed up the car, and headed downtown. It’s the best time of the day to capture photos in town without traffic or parked cars.

Driving down the main street of town, we noticed a diner car parked in a narrow lot. The outside was looking good, but a small handwritten note told of the ongoing restoration by Val and Gordon Tindall. 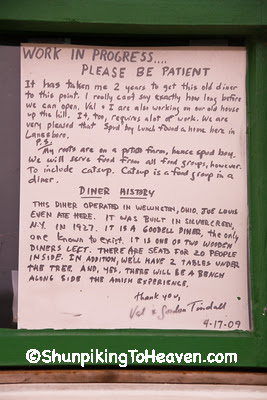 In the fall of 2011, we found ourselves back in Lanesboro. As we stopped to check on the diner, Joann encountered a man waiting patiently on a bench for his wife. He tried to guess the meaning of her license plates, associating the PKR in SHNPKR with the Packers since we were from Wisconsin.

Joann told him that the plates referred to our “shunpiking” hobby and then she explained the meaning of the word. He liked the word, and asked Joann what she was going to photograph. She pointed to the diner, and his response was “Oh, look at that.” Apparently, he had not noticed the diner before then. 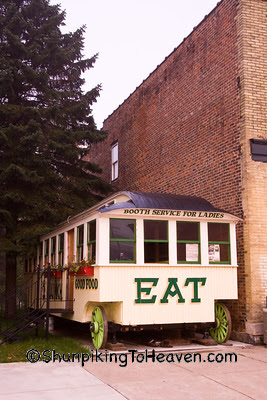 He said that he used to come to Lanesboro to hunt pheasant and deer and that it was totally run down in those days. In the 1970’s the town’s main street was mostly in disrepair and many buildings were boarded up. The Milwaukee Railroad closed its route through Lanesboro and sold the 1870 depot to an individual who tore it down.

This action spurred the citizens to form a volunteer task force to revitalize the town. In 1985, the entire downtown district was listed on the National Register of Historic Places. In 1986, the Root River Bike Trail opened and brought new business to town.

When Gordon first saw the diner, it was a sagging mess with no windows or doors and no interior. Even so, he saw its possibilities and took on its restoration. 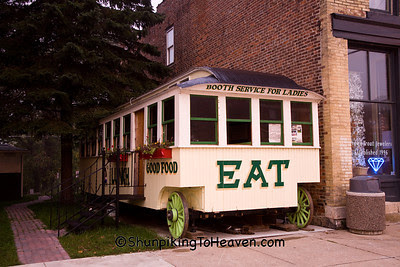 When Val and Gordon visited Lanesboro on a family vacation, they thought the town would be perfect for a diner. Gordon had been operating a diner in Towanda, PA and was beginning restoration of the Spud Boy Lunch in his spare time. His wife was living in Decorah, IA and he wanted to move back to the Midwest. The diner was moved to Lanesboro in November of 2008 and restoration continued. 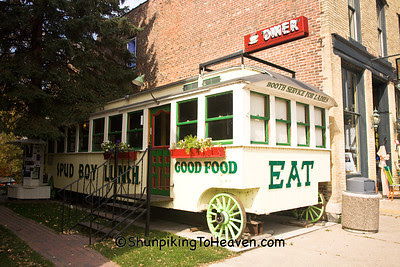 The diner was built by the Goodell Dining Car Company in Silver Creek, New York in 1927, and operated under various names in Wellington Ohio from 1927 until 2002. It is the last known Goodell diner in existence, and is one of only two wooden diners still in operation. The name Spud Boy refers to Gordon’s nickname as a boy being raised on a New Jersey potato farm. 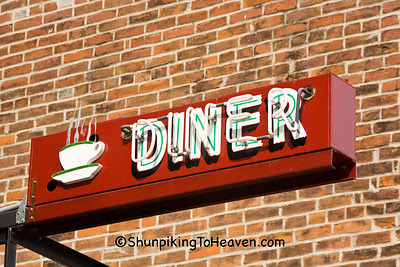 As I was preparing for this post, I did a search on Spud Boy Diner and found an article from the Post-Bulletin in Rochester, MN stating that the diner had opened for business in May of this year. The diner is open for breakfast and lunch. 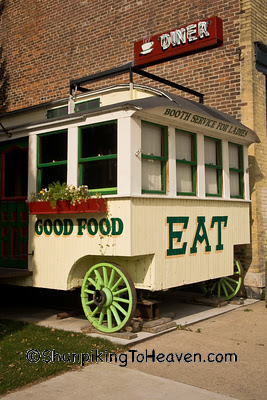 A quote from the diner's website proclaims “To us, it will always be the little diner that died and went to heaven, I mean Lanesboro. Val & Gordon Tinsdall 2011”.

If you make it to Lanesboro, take a stroll down the historic main street and stop in at the restored Spud Boy Lunch.

Posted by Shunpiker at 6:19 PM No comments:

Ruth and I just returned from a 10-day photography trip on the backroads of Ohio (which is why this blog post is a day late). When we catch our breath, we will be sharing some stories from this trip.

As you can probably guess, meandering along the backroads to capture rural scenes, and anything else that strikes me, always makes me smile. 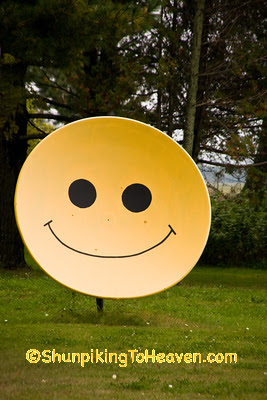 And, sometimes, my subjects smile back! 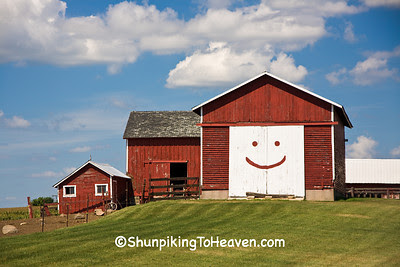 Sometimes, a smiley face will pop out unexpectedly, like this smiley face we discovered on the day after Christmas while doing the Christmas Bird Count. 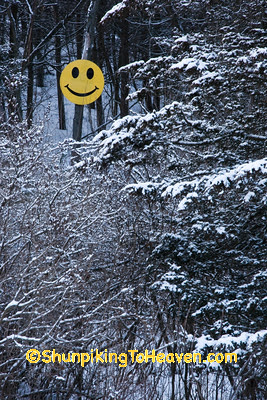 The simple yellow smiley face was created in Massachusetts in 1963 by commercial artist Harvey Ball for the “smile campaign” of the Worcester Mutual Insurance Company. It was an internal program to teach employees to be more pleasant when dealing with customers. 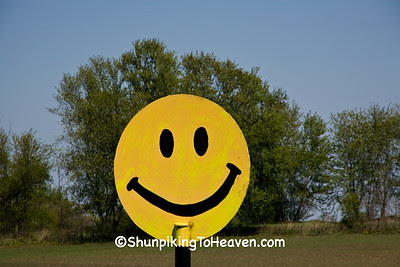 In the 1970s, two brothers, who owned a card shop in Philadelphia, marketed the smiley face (which was never copyrighted) on various products, along with the slogan “Have a Happy Day!” Ruth and I were in high school in the early 70s and we had smiley face shirts and smiley face curtains in our bedroom. 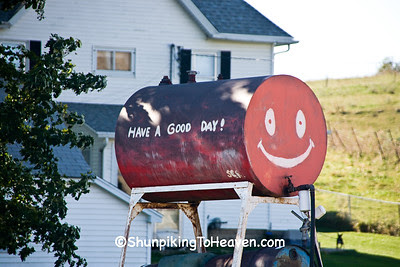 Next year will mark the 50th anniversary of the smiley face. How will you celebrate? 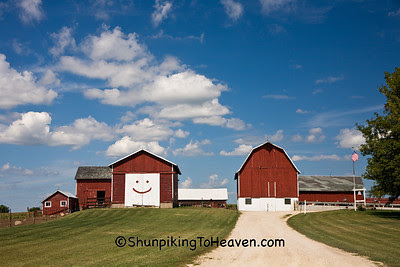 Happy Shunpiking!
Joann
Posted by Shunpiker at 9:17 PM No comments: