Riding the Bus with Wanda

As I said in my Father’s Day blog, during the school year our main farm duty was milking. Dad didn’t believe in sleeping in and he wanted the milking done before we left for school. This meant we had to be in the barn by 4:30 in the morning. 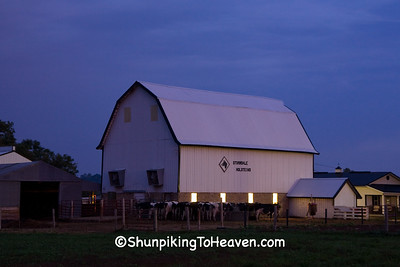 Our barn held 80 cows, and sometimes we had to turn a few out after they were milked to bring in the rest of the cows. There was no fooling around, since we were supposed to have the milking done before we headed off to school.

The second the last cow was milked, we made a mad dash for the house. We usually had about 10 minutes to shower if possible, grab some breakfast and our books, and make another mad dash out the door, and across the lawn to the farm driveway for the bus to pick us up.

If we weren’t standing at the side of the road when the bus pulled up, there was no waiting for us. Our bus driver was named Wanda, and, to put it mildly, she was not a nice or happy person. 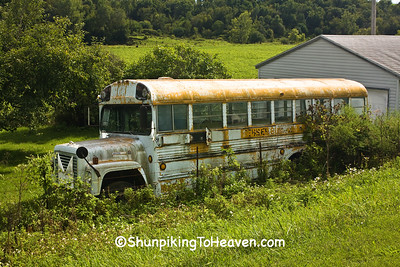 Most of the kids on the bus would be sitting quietly, probably still half asleep, but not us. By the time we got on the bus, we had already been up for hours, so we laughed and talked as we rode along. I think Wanda preferred the quiet, almost catatonic kids to us because she would glare at us in the mirror at every opportunity when we were talking, but especially when we were laughing.

One morning as we rode along, Joann and I were sitting together, and started to laugh about something. She glared at us in the mirror, and then said “Too much feather soup this morning, girls?” 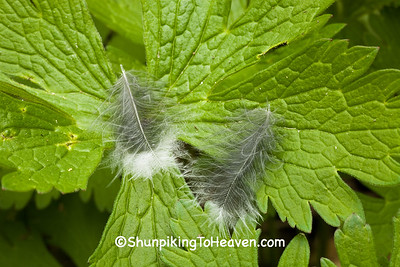 I guess she thought we had feather soup for breakfast which tickled our throats and caused our giggling. Too bad for her. Even though we were working very hard on the farm, we were still very happy kids! 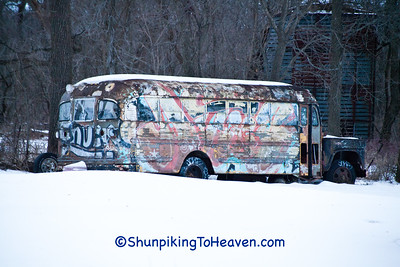 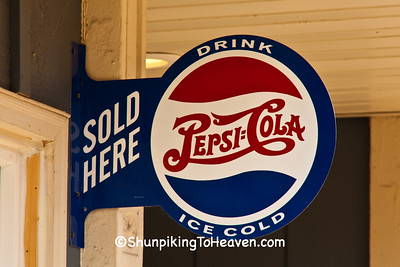 As usual, Wanda just glared at him. And she continued to glare at him at every stop as kids left the bus. But miles before his stop, and ours which was right after his, she stopped the bus to let some kids off. After they crossed the road and went into their house, she just sat, staring into the mirror. This went on for several minutes, her just sitting there, and cars going around the bus. Finally she told him to get rid of the Pepsi. And he told her he wasn’t done with it. 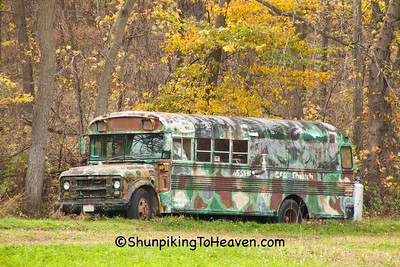 They had a staredown for a while – her looking at him in the mirror and him staring back, slowly drinking his Pepsi. Finally, he sighed and said “Well, if I had known we were going to spend the night, I would have brought my pajamas!” And with that, she opened the bus door and said ‘GET OFF!”. He took his Pepsi, walked slowly to the front of the bus, and got off. And she drove away! 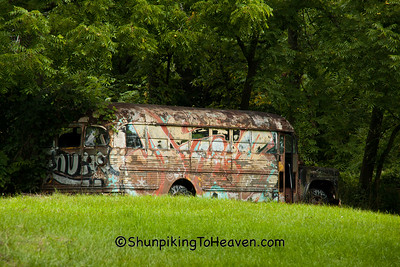 We had nicknamed her “Wanda the Witch,” and every year before the school year started, we waited for the bus schedule to come. There was another bus that came right past our house. We would have gotten on later, and gotten off earlier, but we were never on that route. Every year the schedule had the same time, and ”Wanda the Witch” as the driver. Dang!

But then one morning, our brother Paul got on the bus with what we thought was his lunch. It was in one of those little brown bags that we all used to carry our lunch in. But it wasn’t lunch, and a short ways down the road, he held the bag down by the floor of the bus, and out came a salamander. It was a couple of minutes before the commotion started. Other kids started to notice, and then Wanda noticed, especially when some of the kids started screaming.

It was funny, but we thought we were dead. She was going to tell on us and we’d get kicked off the bus system. I’m sure there was a call to Mom, but we don’t remember getting reprimanded at home. Maybe Mom kept it to herself, since all they did was change our bus. We finally ended up on the other bus that passed right by our house.

We worked very hard as farm kids, but we did always manage to have fun. I hope everyone has as many great childhood memories as we do!

In April, 2015, on the first day of a photography trip to northern Missouri, Ruth and I passed through the town of Savanna, Illinois. Our goal was to capture a few photos of the Pulford Opera House building without cars parked in front of it. This historic building was built in 1892 and housed Pulford’s Drug Store and Miller’s Clothing Store on the first floor and an attorney’s office and the telephone company offices on the second floor. Unfortunately, the opera house auditorium was never finished.

Today, it houses the Pulford Opera House Antique Mall, where Frank Fritz, co-star of the History Channel’s American Pickers show, has a booth called Frank Fritz Finds. High above the ground floor is an organ grinder monkey on a vintage high wheel bicycle. 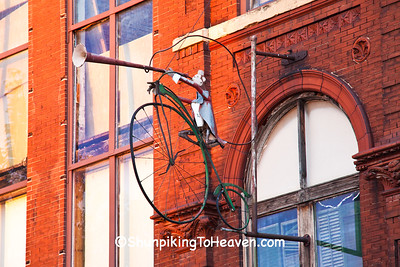 It was mid-day when we arrived and it was raining lightly. As we came down Main Street, we were delighted to see that there were no vehicles parked in front of the opera house. I parked the car across the street and quickly grabbed my camera equipment and umbrella. Photographing in the rain while holding an umbrella over my equipment is difficult and time-consuming, so I said a quick prayer that I could get my photos taken before a vehicle parked in the middle of my scene.

The door that gets you to the antique mall is actually the door to the Hawg Dog Bar & Grill. There was a white van parked in front of the bar, so I kept making sure the back of the van didn’t get in any of my photos. But, as I worked, someone kept entering the left side of my scene, pushing a dolly into the bar. I figured it was some kind of delivery to the bar. After successfully capturing the opera house block, I started walking back to the car. Suddenly it dawned on me that the white van belonged to Frank Fritz and it was he who was hauling things into the bar for his antiques booth. He came out one more time without the dolly and stopped to converse with someone he knew. I snapped a quick photo from down the street and then they went inside the building.

Thinking that Frank might be getting ready to leave, I quickly put my camera equipment back in the car and asked Ruth what I could take to get Frank’s autograph. Neither of us had a good idea, so I grabbed a small notebook and made a mad dash for the antique mall. I found Frank just inside the door, so I introduced myself and asked him if I could have his autograph. He kindly obliged.

Frank and I went back outside where he showed me that he still had quite a few things to unload from the back of his van. He said that he had just returned from driving thousands of miles to Texas and back, “picking” for antiques. According to his website, his interests are “old motorcycles, old toys, old cars, and anything that is old and unusual.”

If you watch the American Pickers show, you know that Frank often negotiates with sellers on vintage oil cans. 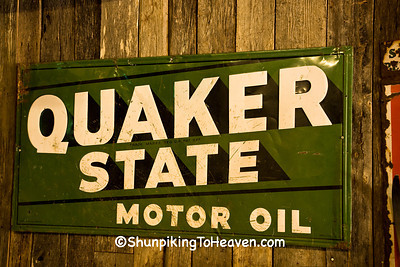 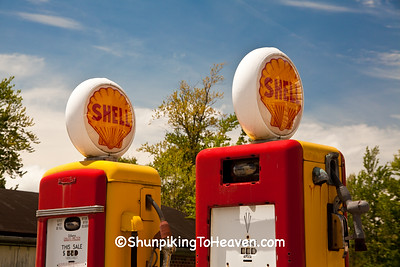 In early September, 2015, a little over four months after I met Frank Fritz in Savanna, Illinois, I received a request from an archivist from the American Pickers Show. She said they were interested in using a photo I took on Route 66 of some 1924 Fry Guaranteed Measure “Mae West” visible gas pumps.

The episode was called “Can’t Catch a Break” and it aired on October 21, 2015. Unfortunately, my photo didn’t make the final cut. But I was pleased to get a credit at the end of the show.

Frank Fritz and Mike Wolfe say that they travel the backroads of America telling its history. So do we!