Eleven years ago, on July 5, 2009, we published our very first blog post. We had worked so hard to get the entire photo gallery website up and running so that we could share all our photos. As soon as that was working well, we set up our Backroads Blog so that we could share the stories behind the photos. That first post was entitled, “In Honor of the Laugh-in Cows” and, unfortunately, because of our inexperience with the whole blogging process, we only posted two photos with that story.

Last week, I posted a picture of these cows on my personal Facebook page and it generated a lot of interest, so I thought it was high time that I processed more of the photos I took of this wonderful scene so many years ago. And, because that blog post was published over 10 years ago, I’ll repeat the story of finding this delightful scene and why we labeled them “The Laugh-in Cows.”

We spent that lovely autumn day photographing on the backroads of Sauk County, Wisconsin. Those were the days when our subject matter was mostly focused on barns, farm outbuildings, and old mills. During the morning, we found this interesting outbuilding, which appeared to be a corn crib on the left and possibly a granary on the right. 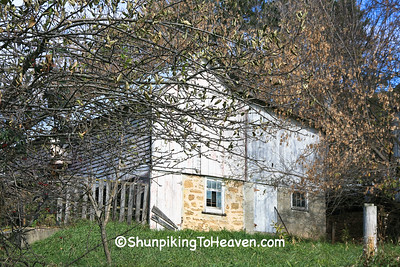 In the early afternoon, we were heading down a county highway and we saw a beautiful tile silo next to a large curve in the road. I was focusing on watching the traffic as we approached the curve when Ruth said, “WAIT! We need to go back!” When I asked her what she had seen, she said, “I’m probably hallucinating, but could you just turn around? I swear I saw a barn with a cow in every window!” So, I turned the car around when I could safely do so and drove back around the curve. As we came out of the curve and I slowed down to pull off the road, there it was…a barn (or outbuilding) with a cow in every single window. 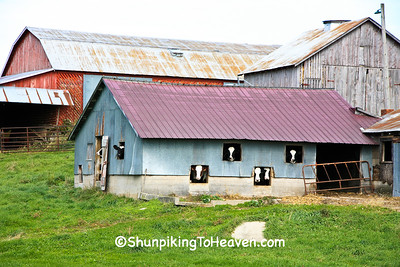 We stood in front of the car looking at this unbelievable scene and we couldn’t help but laugh. The cows were all vying for a spot in one of the windows. Often, after a short, friendly “battle” for the spotlight, they would “agree” to share the window.

When we were kids, we never missed an episode of a sketch comedy TV show called Rowan & Martin's Laugh-In. It ran from January 1968 to March 1973. At the end of every show, cast members took turns opening panels in a psychedelic "joke wall" and telling jokes. When we discovered this farm with a cow in every window, we stood along the road and laughed for an hour because the cows kept changing places as they fought for a window spot. It reminded us of the Laugh-In show's joke wall, so we called them "The Laugh-In Cows."

Sometimes, a cow that was looking out an upper window would lean out and look down at a cow in a lower window. This is exactly what the Laugh-in stars did when they told a joke that made fun of someone in a lower window of the joke wall.

Cows were even looking out the window that was on the end of the building. At one point, shortly after we had crossed the highway to get a closer look, one of the owners came out and introduced herself. I think she enjoyed watching us as much as we were enjoying watching the cows. 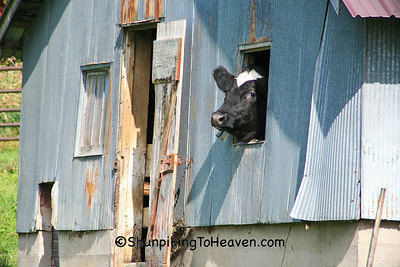 One of "The Laugh-in Cows", Sauk County, Wisconsin

Oh, and that tile silo we were going to photograph…we didn’t forget to capture it as we left the Laugh-in Cows that day.

Two years later, at the end of summer, we decided to see if the Laugh-in Cows were still there and to capture more photos of their antics. They were there and they were once again looking out the windows, but it had rained a lot in the days prior to our visit and the cows were all caked in mud. We were disappointed, but we vowed to return soon.

The following spring, we decided to pay another visit to the Laugh-in Cows. As we approached the farm, our mouths dropped open as we discovered that the barn was no more. There was only a small piece of the foundation left. We don't know what happened to that barn or the Laugh-in Cows, but we will remember them fondly forever.