We’ve said it before. Historic buildings are disappearing from the backroads, small towns, and cities at an alarming rate. It is what fuels our desire to be out photographing whenever we can.

Joann and I love to come across old schools, both abandoned and restored. We are happy when schools are saved as homes, but we are even happier when the owners understand the historic value and leave the outside of the schools as intact as possible. 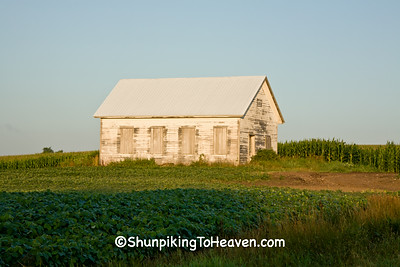 Often the land for these old schools was donated by a farmer. It was common for farm families to have a lot of children, and usually the farmer’s children would be among the students at the school.

One of these schools was the Ripp School north of Waunakee, Wisconsin. We first photographed this school on film many years ago. We continued to pass by it over the years, and even after we upgraded to digital photography, we passed it often when we were out photographing. 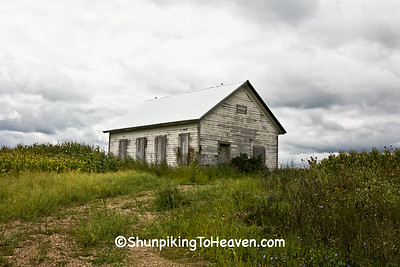 For some reason, we hadn’t photographed it for years. Then, while out photographing one morning, we talked about how it had been years since we had stopped, and that we probably didn’t have digital photos for our collection.

Our last stop at the school was in September of 2011. After that, I passed the school often as I drove back and forth to Waunakee. Then one day, it was gone and in its place was a bare patch of ground. I was saddened by the sight and went home to write an email to Joann to tell her that the school had been torn down for more cropland.

In May of 2009, while driving the backroads of Lafayette County, we stumbled on another school. At first we couldn’t even decide if it was a school or just a small first house from many years ago. Then I found a picture of the school with the name of the farmer who had donated the land. The farmer was John Logue and the school was named after him. He donated 1/4 acre of land in 1867, and the school opened that year. The school functioned until 1939.

Joann loves different textures, and in that way, this school was a bonanza. It was a stone school with a brick chimney on the outside next to the wooden front vestibule. Joann took a lot of pictures that first day. We don’t spend a lot of time in Lafayette County, so we never know when we’ll be back to one of our finds.

We managed to revisit the Logue School in the spring of 2011. It was still standing and looking about the same as it had two years before. Even though we had gotten good photographs on our first stop, Joann took a few more pictures.

We returned to the area in May of 2013. Since I’m always watching the map, I knew when we came to the corner that the school should have been on. The school was gone and all that remained on the spot were a couple of trees and a small pile of stone.

The same thing is happening in all of the farming areas across the country. With the price of land, farmers want to squeeze out every inch of cropland. To this end, they are tearing out old buildings and line fences so that all you see for miles are the crops.

When you’re lucky enough to travel the backroads, enjoy the sights. Some of those sights might not be there the next time you pass by. RIP Logue and Ripp Schools. We’ll miss you.

Photos in this blog post can be purchased as wall art, paper prints, downloads, phone cases, and keepsakes by clicking on the photo. You will be taken to the gallery website where you will see a big blue "BUY" button. Or to see all photos available, click on the "Browse Galleries" button on the menu at the top of this page. Thank you for your interest!
Posted by Shunpiker at 10:32 PM 1 comment:

Remembering the Cherry Mine Disaster

When you think of coal mining, the state of Illinois is probably not the first state to come to mind. But one of the worst mining disasters in U.S. history actually occurred at the Cherry Mine in northern Illinois on November 13, 1909.

At 7:00 A.M. that fateful morning, there were 481 men and boys in the mine. For most of these European immigrants, it was their first job in the new world. The town of Cherry had a population of 2,000 and, in one way or another, everyone’s life was connected to the St. Paul Coal Company, the only industry in town.

Memorial Sign to Lives Lost in the Cherry Mine Disaster, Bureau County, Illinois

The mine was 500 feet beneath the town and included a stable for the mules used in hauling the coal. When hay was sent down for the mules that day, it was left beneath one of the torches strung throughout the mine. The hay ignited and soon the timbers and the coal vein itself were on fire. The burning coal produced a thick black smoke called black damp.

The only method of communication between the miners was man to man, so it took too long for the message to spread that the mine should be abandoned. Some men made it out of the mine, but almost 300 men were trapped.

Some miners were rescued that first day before the elevator also caught fire killing all of the rescuers in the cage. After this, there was no hope of rescue as the fire burned. The mine officials had lumber and sand thrown over the blocked exits to try to extinguish the fire, and fire crews from Chicago were called. They poured tons of water into the shaft.

Eight long days later a rescue party descended into the mine. They found only 25 miners alive. These men were given emergency medical treatment and then a ride home to their families. One old miner wanted to walk home and was found dead in his bed two days later. He is considered the 259th death from the accident.

Serious exhumations of the victims in the mine began in the spring of 1910. Long rows of bodies were laid under white tents as they were identified. Then, horse-drawn hearses carried the caskets to the Cherry graveyard just south of town.

Joann and I first visited the Cherry Miner’s Cemetery in April of 2013. It was sobering to see the rows of gravestones all with the same date of death. We were amazed that the town had survived after the tragedy.

Before our trip in the spring of this year, I came upon more history of the mine and found that the gob piles (the waste of the mining process) were still there just north of town along with a building or two that had been incorporated into a farm.

In downtown Cherry, there is a memorial to the miners who lost their lives in the disaster. It includes an etching of the mine as it looked at the time, and the names of the miners lost.

In 1910, the Illinois legislature established stronger fire and safety regulations for mines, and a year later the state adopted a liability act which later became the Illinois Worker’s Compensation Act.

You never know what history lies just down the road in your travels. Some good, some bad, but all of it shaped our country.