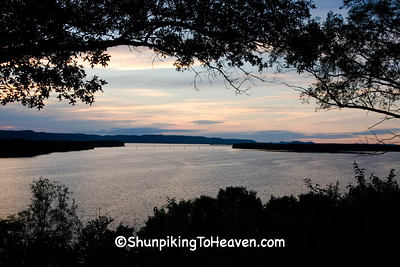 At times the road hugs the river and at others, it is a few miles away. It travels through larger cities, small river towns, and beautiful countryside. The Mississippi River headwaters are at Lake Itasca within Minnesota’s Itasca State Park.

As is often the case with us, we haven’t taken a trip yet dedicated to The Great River Road, although spending more time there is on our wish list.

The Great River Road isn’t really one road, it’s a combination of US Highways, State Highways, and local roads.

To help you plan a trip, you can order a map from The Great River Road website. Here you can even find itineraries for the entire route, or smaller sections to suit your available time and interests. 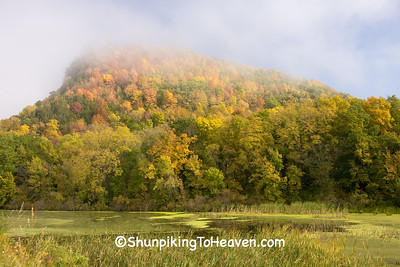 On the parts of the road we have travelled, the railroad tracks closely follow the river. You’ll often see trains and their related buildings. 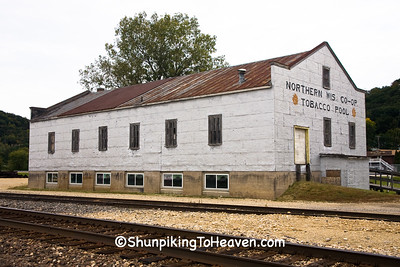 You’ll also find some historic bridges to cross from side to side. Unfortunately, every year more of these bridges are being replaced with modern versions that are not as picturesque.

Even though we haven’t spent nearly enough time on the Great River Road, we have managed to find things that interest us in the cities, small towns, and countryside.

In Winona, Minnesota, we found the old stone Sugar Loaf Brewery building. It was established in 1862 at the foot of Sugar Loaf, the prominent river bluff from which it took its name. Also known as Bub's Brewery, it is on the National Register of Historic Places.

And we found an old sign for the Sugar Loaf Motel. 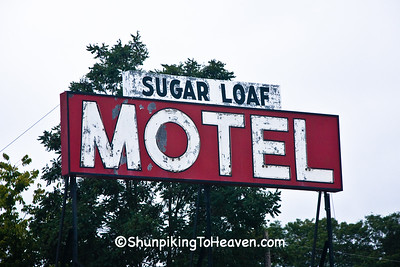 Across the river in Wisconsin, we found an abandoned brick farmhouse. 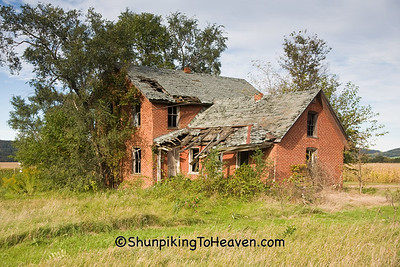 And in Trempealeau, we found a street or post clock. We love finding them, and have to admit, we’ve passed some without noticing them, sometimes more than once!

In La Crosse, you can see the World’s Largest Six-Pack. Don’t miss the statue of King Gambrinus across the street like we did! 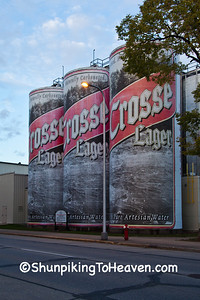 In Potosi, you can visit the historic Potosi Brewery. Originally founded in 1852 along the Great River Road and just a stone’s throw from the Mississippi River, the Potosi Brewing Company brewed more than a century’s worth of delicious craft beer before finally bowing to shifting market pressures and emptying its bright tanks for good in 1972. Today it has been restored, is on the National Register of Historic Places, and is the site of the National Brewery Museum.

In Iowa, you’ll find plenty of farm scenes. We visit Iowa often, and even though our main focus has usually been barns, we managed to spend an early morning in downtown Dubuque. 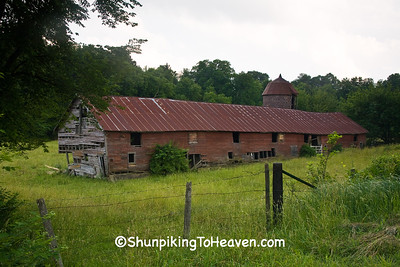 While we were there, we found Dottie’s Café, and by seeing all of the people going in, we could tell that it’s a popular place for breakfast.

Galena, Illinois is such a historic town that you could easily spend half a day or more in town. 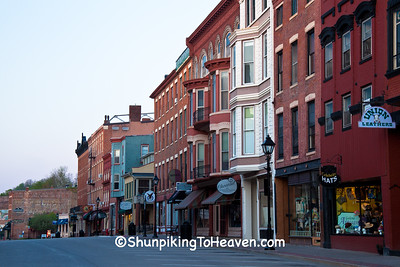 From Ulysses S. Grant’s home you can get a bird’s eye view of the city. 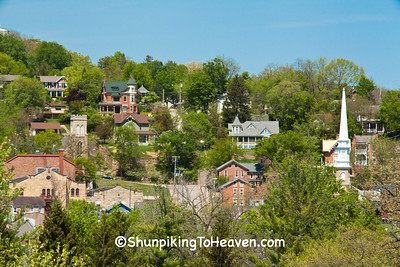 The farthest south we’ve traveled on the Great River Road is Missouri, and on our last trip there, we crossed the river into Illinois on the Champ Clark Bridge. Champ Clark Bridge is a five-span through truss bridge completed in 1928. The view is from Henderson Park Overlook high above the Mississippi River on the Great River Road in Louisiana, Missouri. Henderson Park was given by and named for John B. Henderson, a United States Senator from Louisiana, Missouri and a co-author of the Thirteenth Amendment to the United States Constitution. 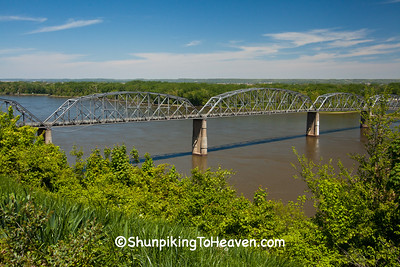 It was so pleasant at the park high above the river. In one direction, you could see the Champ Clark Bridge, and just down river, an old Railroad bridge. 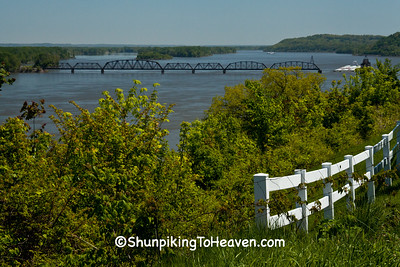 And there was pretty frequent barge traffic travelling on the river. We were a little late in leaving, but it was worth it. This bridge too is scheduled to be replaced. And, although that’s great for travelers’ safety, new bridges never have the character of these old bridges. Enjoy them while you can. 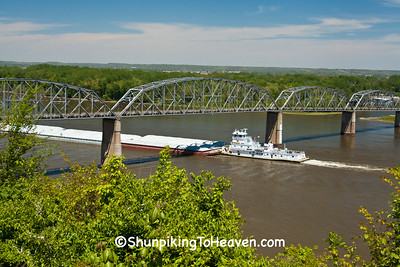 We hope you have a chance to travel some or all of the Great River Road. If you’re interested, you can see riverboats at their shore stops in La Crosse, Wisconsin. The schedule is subject to change depending on river conditions.

Drop us a line if you find something interesting we should check out. We always have room on our calendar for more. (HA!)

Two weeks ago, we decided to make the 3-hour drive up to Bergsbaken Farms in Cecil, Wisconsin, to see their sunflower fields. Of course, as always, we planned to photograph our way up and back. A little after 7:00 a.m., we arrived in Oshkosh and went to find something we have been wanting to capture for quite some time now – Ardy and Ed’s Drive-in.

This drive-in opened as the Southside A & W Drive In in 1948, about three years after World War II ended. The menu was simple -- A & W Root Beer, Hot Dogs and potato chips. The drive-in was sold in 1953 to Robert and Elizabeth "Ollie" Albrecht of LaCrosse, Wisconsin. 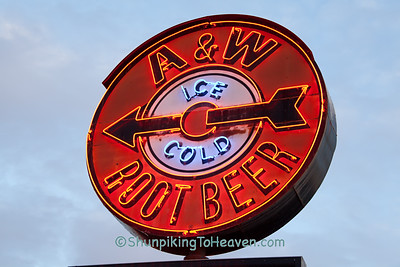 On July 1, 1960, Mrs. Albrecht's son, Edward Timm, and his wife Ardythe took over ownership of the Southside A & W Drive In. In 1972, the Timms decided to leave the A&W franchise family and they renamed the business "Ardy & Ed's Drive-In." 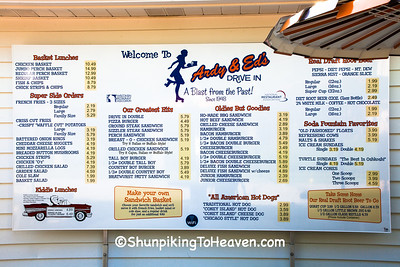 In 1979, Ed passed away, but Ardy kept the drive-in operating. Today, she and her husband, Steve Davis, continue to offer a real "Blast From The Past,” serving food the way it used to be served – by roller skating car hops while music from the 50’s and 60’s plays in the background.

We didn’t realize they had roller skating car hops until we did the research for this blog post. If we had realized it, we might have spent another hour in town and then gone back there when they opened at 10:30. It would have been fun to order a frosty mug of root beer and have it delivered on roller skates.

And in case you’re wondering, we really did make it to Bergsbaken Farms for an afternoon walk through the huge sunflower fields. 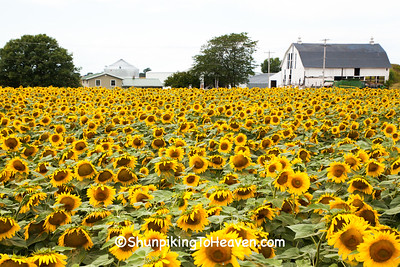