Is there anything better than a sunflower to bring a smile to your face in the middle of summer? The only thing I can think of is to be standing in the middle of a huge sunflower field, with the sunflowers towering over you and the insects busily making their way around the seed heads.

On July 25, 2018, we left home around 4:00 a.m. and took the 3-hour drive up to Bergsbaken Farms, located about 40 minutes northwest of Green Bay, Wisconsin. Of course, we didn’t get there until mid-afternoon because we photographed in Oshkosh, Bonduel, and Cecil before heading to the sunflower fields. 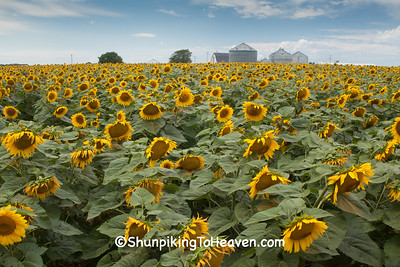 Dale and Shari Bergsbaken and Lee and Betty Ann Bergsbaken are the current owners of Bergsbaken Farms. Dale and Lee’s father, Daryl, a World War II veteran, purchased the farm in 1948. He and his wife, Marie, began with 60 acres, 19 cows, and some pigs and chickens. In 1969, they constructed a milking parlor and began focusing solely on dairy. In 1987, after having grown the farm to 100 acres and 40 milk cows, Daryl and Marie turned the farm over to Dale, Lee, and their wives. Together they farmed 550 acres and milked 200 cows.

In 2006, on a visit to the hardware store, Lee Bergsbaken noticed a bag of sunflower seeds and got to wondering how hard it might be to grow a sunflower crop. The Bergsbakens had years of experience growing corn, soybeans, and other crops, so a year later, they planted 10 acres of sunflowers to see if it might be a worthwhile crop for the future. Around the same time, they decided to get out of the dairy business and focus on cash crops.

In the following years, the Bergsbakens continued to increase the acreage planted with sunflowers. And they noticed that every increase in the sunflower crop brought an increase in the number of people stopping along the road to take pictures of the beautiful sunflowers. So they decided it was time to hold some kind of event. In 2016, they created a few trails among the sunflowers and arranged to pull a wagonload of people through the fields to view the sunflowers in all their glory. Then they held the first annual Bergsbaken Farms’ Sunflower Fest. The two-day event attracted 1,500 visitors and a lot more visitors after the festival.

In 2017, they added kids’ activities and served food. That year, 8,000 people attended. In 2018, they expanded the festival to three days. This year, the Bergsbaken family held their fifth annual Sunflower Fest with added trails and viewing platforms, along with live music and sunflower-themed vendors. The only cost is a suggested $2 donation, which is collected in a box near the entrance to the fields. The family said they just enjoy seeing all the people smiling and having fun. And they allow folks to visit the fields in the days before and after the festival. 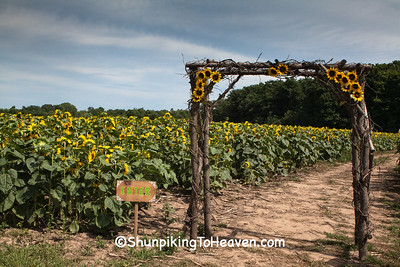 Bergsbaken Farms now grows at least 225 acres of sunflowers. According to Lee Bergsbaken, each acre can yield an average of 2,500 pounds of seeds, which are harvested in the fall. They are then cleaned, packaged in 30- or 50-pound bags, and sold at the farm.

If you like sunflowers, here are a few sunflower facts you might enjoy (taken from FTD’s ProFlowers website). Young sunflowers follow the sun from sunrise to sunset. Mature sunflowers face east, allowing them to attract up to five times more pollinators due to warming up faster than westward-facing plants. 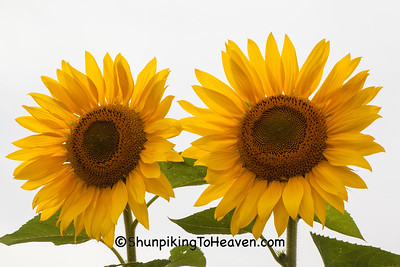 Sunflowers are native to North America. The leading producer of sunflowers in the United States is North Dakota. And here’s a fascinating fact I learned in researching this topic: the head of a sunflower is made up of thousands of tiny flowers. And one more thing to know if you decide to visit the sunflower fields at Bergsbaken Farms next year or beyond: you can cut sunflowers to take home for a small fee, but they will last longer if you cut them in the morning.