The first time I stumbled on a picture of the Elmira School, I thought it was very cool and knew I had to mark it as a location for us to visit. I also worried that we wouldn’t make it there before it gave up the ghost to Midwest winters. 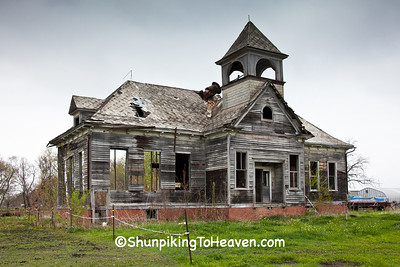 Finally, in 2015 when I was planning a photo trip that would take us through some very southern Iowa locations, and just the very northern section of Missouri, I managed to include it as one of our “on the way” locations. I remember sharing the picture with Joann when I first found the school, but I made it a point to not remind her before the trip so she could be surprised when we pulled up to it.

As we came down the highway, we could see the school sitting there looking forlorn. Joann quickly found a place to park, which was in the driveway of the town cemetery across the road. She got her equipment out of the car and headed across the highway.

From what I can tell, this two-room frame building with a brick foundation replaced an earlier building in 1902. In the beginning, some high school classes were offered, including the subjects of Algebra, English, Latin, Physical Geography, Civil Government, and Ancient History. High school classes were held until about 1915 when the school became only grades 1-8.

In 1952, the Osceola school district petitioned to join the Elmira district. It was approved and a new school building was also approved to be built at another location. That consolidation and subsequent new school building marked the end of educational life for this building. One source says the school was used for community meetings for a while, but was completely abandoned by the early 1970’s.

As you can see in the photos, most of the boards are missing from the back of one end of the building. The bell is long gone from the bell tower and the vent of the stovepipe is lying on the roof. There are also holes in the roof, which is always the beginning of the end. Since our visit was in 2015, there’s no telling what the building looks like now, if it’s even still standing.

It will probably be years before we’re even near this location again, and I don’t know if we’ll even want to drive past since seeing no trace of a building we’ve enjoyed photographing always makes us sad.

Ruth and I usually take our longer photography trips in the spring because we love taking one or two-day trips around Wisconsin in the fall. However, in 2012, we decided to take a lengthy fall trip and one of the subjects on Ruth’s never-ending list was an old Ojibwa cemetery that she had stumbled on in her research. The only problem was that it was from an old historical list from the 1970s and the directions weren’t specific at all. They just said it was on a dirt road off an old highway.

Ruth is always very resourceful and a pretty good detective when it comes to figuring out where something might be located, so she took her best guess and we found the dead-end dirt road she had in mind. The road looked something like this fall color road scene from Wisconsin, only it was a much sunnier day. We slowly crept down the road looking carefully on both sides, but everything was so wooded, and we didn’t see any sign of the cemetery.

When we reached the end of the road, we were sitting in the car discussing which road we would try next if we didn’t find it on the way back from the dead end. As we were turning the car around, we saw a man in the yard of the house at the end of the road. We told him what we were looking for and he laughed and told us that we had driven right by it. He said that it was very hidden in the woods, but we would find it on the right side as we headed back down the road. Sure enough, it was there, but not easily spotted. 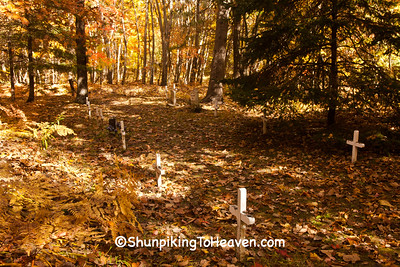 A simple homemade sign at the entrance stated that this was an area where a battle had taken place between the Chippewa (another name for Ojibwa) and the Sioux in 1840. It also said that the cemetery contained the graves of the chiefs of each tribe, buried facing each other, along with their tomahawks. There were a few traditional stones with names on them, but most of the grave markers were simple wooden crosses with no names. They were in rows that led to a large unadorned wooden cross.

As we walked among the crosses, it felt like we were standing on very sacred ground. We found ourselves whispering to each other. And we tried to determine where the two chiefs might be buried, but we couldn’t figure it out.

And then we noticed something we had never seen in any of the cemeteries we’ve visited over the years. Most of the crosses and gravestones had coins on top of them or around the base; lots of coins. We wondered what it could mean.

Although we didn’t have an understanding about this custom, we felt compelled to participate in it. So, I ran back to the car and gathered up some change. I returned to the cemetery and Ruth and I respectfully placed coins on some of the crosses. There was something about this place and the Native Americans who called this country their own before our ancestors arrived from Europe that touched our hearts.

In researching for this blog post, we found a bit of information about this custom. According to a cemetery director, there is an old superstition that if you leave a coin on a grave, the spirit will grant you a wish, such as wealth, love, or health. And if there are evil spirits around, they will be more interested in taking the coins than the soul of the deceased.

As we left the cemetery, we reflected on the Ojibwa Prayer that was posted on a sign at the entrance. In part, it said:

Oh, Great Spirit, whose voice I hear in the winds
And whose breath gives life to everyone,
Hear me.
Let me walk in beauty, and make my eyes ever
behold the red and purple sunsets.
Make my hands respect the things you have made.
And make my ears sharp so I may hear your voice.
Make me wise, so that I may understand what you
have taught my people and
the lessons you have hidden in each leaf
and each rock.