I don’t know about you, but I just can’t believe that it’s Thanksgiving time again. This year has flown by so quickly. It’s been a great year and I have much to be thankful for. 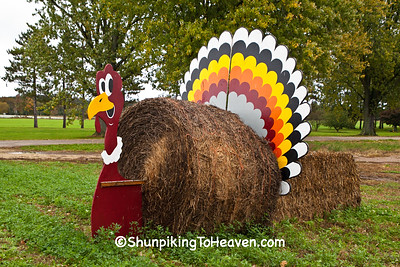 I hope you and your family are feeling blessed and that you have a wonderful Thanksgiving weekend.

Ohio is one of our favorite states in which to photograph. Ruth has done some very extensive research on this state and we have taken four photography trips there – one in the winter and three in the spring. On all three spring trips, we spent two days in the Zanesville area, with one of our favorite subjects being Mail Pouch Tobacco advertising signs. 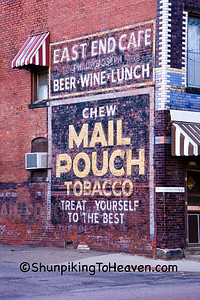 On our most recent trip there earlier this year, we visited the county courthouse in Zanesville for the first time. In her research, Ruth had discovered that a very unique veterans memorial had been erected fairly recently on the courthouse grounds.

The monument is a tribute to the servicemen from Muskingum County, Ohio, who gave their lives for their country during World War II and the Korean War. It consists of a pile of 297 helmets, each one containing the name of a fallen soldier from this county.

The sign on the helmet sculpture reads as follows: “297 men from Muskingum Co. Ohio died in World War II 1941-1945, and the Korean War 1950-1953. This monument is a tribute to that sacrifice. 297 empty helmets (symbolic of each fallen soldier, sailor, marine, and airman) have a name upon them. 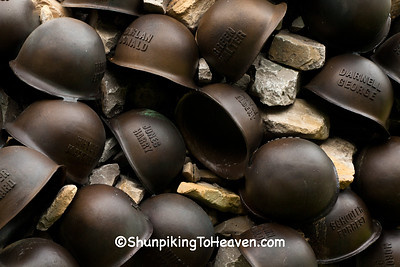 “They are scattered atop an earthen mound (used for millennia to honor the dead) in an irregular chaotic manner as is the nature of the battlefield and war. 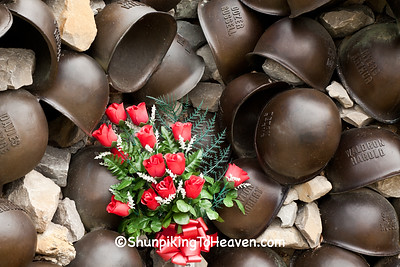 “To the rear of the helmets we have a 7' soldier in full battle gear grieving his fallen comrades, while being comforted by yet another soldier.

“In the front of the helmets we have a strapping young man striding forward with a purposeful gaze into the future, secured by the sacrifice of the men being honored in this monument.

“Many thanks to the donors who made this tribute possible. Alan Cottrill/Sculptor 2012” 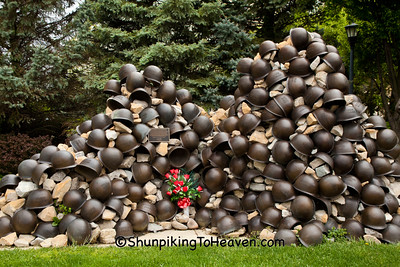 And many thanks to all the men and women who have served and are serving our country in all branches of the military. We will be forever indebted to you.

Along a Wisconsin highway with traffic whizzing past at 55 miles an hour, sits a lone concrete marker. Most people driving past probably don’t even notice it. Joann and I were looking for it, and we missed it the first time past.

The marker sits along the highway at the site of the former inn and tavern owned by George Salter and his second wife Emma. In the early days of the railroad, all freight and passengers bound for central Wisconsin came to New Lisbon.

From there, stagecoaches and wagons continued on. The Salter inn and tavern was a popular place for both locals and travelers.

In June of 1863, George Salter went off to help neighboring farmers with the hay harvest, and the older children went off to school. Emma and her 18-month-old baby were home alone. George always told her that when he was gone, she was not to serve whiskey to the Indians.

While she was alone, a neighbor stopped by and warned her of Indians in the area. She told him that several had already stopped by to ask for whiskey and she had refused them and chased them off. She told him she would be OK.

Shortly after the neighbor left, the Indians returned and demanded whiskey, which she again refused. She tried to chase them off with an ax handle. The Indians took the ax handle from her and used it to kill her. Then they drank the whiskey, and while one of them, Jo Dandy, remained behind, too drunk to travel, the others left. 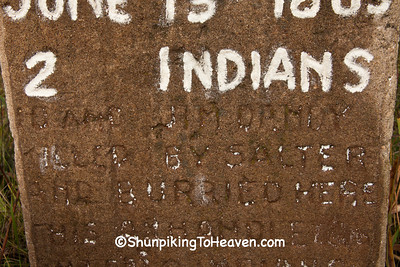 When another neighbor stopped by, he found Mrs. Salter dead and rode off to find George Salter. Mr. Salter returned home immediately and killed Jo Dandy, who was still in a drunken stupor. The following day, Jo’s brother, Jim Dandy was captured. Mr. Salter said that he would spare Jim if he would say who killed his wife. When Jim Dandy tried to escape, Mr. Salter killed him with the same ax handle. 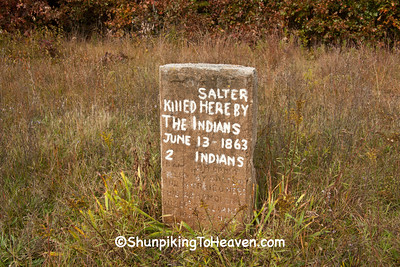 The Indians were buried in the road outside of the tavern. Gus Nooney, a pioneer neighbor of the Salter family, made the marker, and along with the words, made an impression in the concrete of the ax handle used to kill Mrs. Salter, and later, the Indians who had killed her. 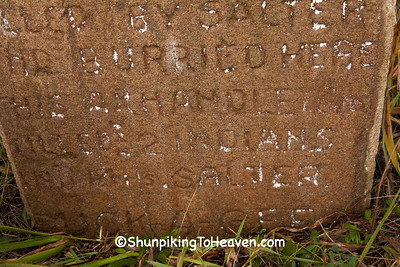 Although the marker is hard to read, a photograph of the marker from around 1925 can be found on the Wisconsin Historic Society website. The words on the marker state "Mrs Salter killed here by the Indians, June 13 - 1863, 2 Indians Jo and Jim Dandy killed by Salter and burried here. This ax handle killed 2 Indians and Mrs. Salter. Puck-A-Gee."

In the 1930’s, there was a movement to replace the crude marker with something bigger and more permanent. Nothing became of that movement, and the original marker still stands. It is very faded, although someone has tried to paint the lettering to make portions of it readable. The ax handle that was pressed into the marker is all but faded away. 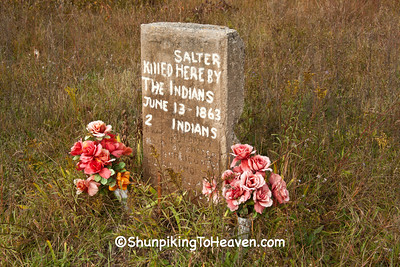 It is said that for a long while, the Indians avoided the site except to fire upon the tavern in the dark of night. These days, someone does come to place flowers at the marker, and on the day we visited, there were some faded plastic flowers next to it.

You never know what sort of history you’ll find along the roadsides, so pay attention in your travels. But especially pay attention to traffic and stay safe.