Madonna of the Trail

In 1928 and 1929, identical monuments were installed in each of the 12 states crossed by the National Old Trails Road (Route 40), also known as the National Road, which started in Bethesda, Maryland, and extended to Upland, California. These statues were commissioned by the National Society of the Daughters of the American Revolution to honor the courage, fortitude, and faith of the pioneer mothers on their journeys west.

The statues were created by sculptor August Leimbach and were made from a mixture of stone, marble, cement, lead ore, and a pinkish crushed granite from Missouri. With the large pedestal base, the monuments are 18 feet tall and weigh over 17 tons. The statues themselves are over 10 feet tall and they feature a pioneer mother holding a baby in one arm and a rifle in the other. A small boy stands at her side, clutching her skirt.

The National Road followed the route taken by the pioneers as they journeyed west in their covered wagons in search of a better life. The photo below is a small section of a large mural in Reynoldsburg, Ohio, created by artist Curtis Goldstein. It shows a covered wagon loaded with supplies and sitting next to a National Road mile marker. 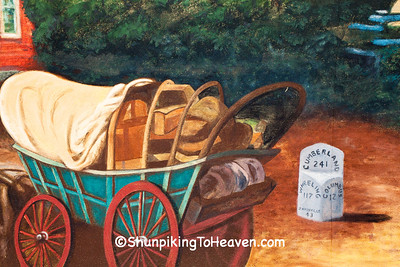 Arlene B. Moss, chairwoman of the committee of the Daughters of the American Revolution, came up with the idea for these monuments. She said, “The statue is a fitting tribute to the brave pioneer mothers who aided so much in the progress of this country. These brave women backed their men folks through hardships, privations and during hard Indian battles. Without the pioneer women, there would have been no progress in this country.” The first statue was dedicated on July 4, 1928, in Springfield, Ohio.

At the dedication of this monument, Judge Harry S. Truman, President of the National Old Trails Road Association, and future president of the United States, spoke at the ceremony, saying, “They were just as brave or braver than their men because, in many cases, they went with sad hearts and trembling bodies. They went, however, and endured every hardship that befalls a pioneer.” One side of this monument has an inscription about local history. It says, "Three miles southwest of here General George Rogers Clark, commanding Kentucky frontiersmen, vanquished the Shawnee Confederacy, August 8, 1780, resulting in opening the Northwest Territory."

Three days later, on July 7, 1928, the second monument was dedicated in Wheeling, West Virginia. At the dedication, Arlene B. Moss said, "The monuments will serve as great national shrines. The beauty of these memorials will add to this country's natural scenic wonders and will remain as lasting memorials."

On the side of this monument, it says, “To the Pioneer mothers of our mountain state, whose courage, optimism, love, and sacrifice made possible the National Highway that united the east and west.” The National Road, also called the Cumberland Road and the National Pike, had reached Wheeling, West Virginia by 1818. Today, the historic Wheeling Suspension Bridge, which opened in 1849, still carries the National Road across the Ohio River, where it continues to make its way westward. 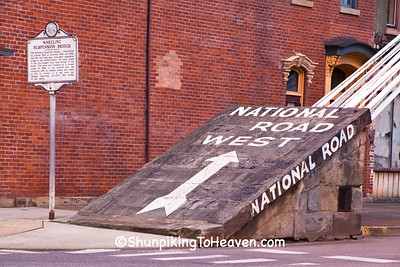