A month ago, I posted a story entitled “Dragonfly” in which I wrote about some interesting dragonfly encounters shortly after our brother Paul died in June of 2014. A few days ago, I had another very interesting encounter with a dragonfly. 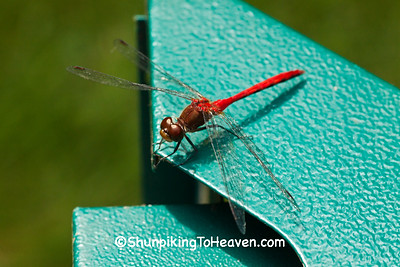 I needed to repaint part of a green metal birdfeeder that had gotten rusty over time, so I set the birdfeeder on some newspaper and went to get the can of spray paint. When I returned with the paint, there was a beautiful red dragonfly sitting on the newspaper. I said, “I don’t think you’re going to want to stay there when I start spray painting.” And after I started, the dragonfly left the newspaper, but moved even closer to the paint and landed on top of the birdfeeder.

As he sat there looking at me, I said, “Okay, Paul, if you sent this dragonfly, then have him hang out with me for a while.” Then I continued to spray the smelly paint on the inside of the birdfeeder and the dragonfly continued to hang out on top of the feeder. I couldn’t believe it, so I went inside to get my camera, expecting him to be gone when I returned. But he was still sitting there, so I began to photograph him, sticking my macro lens right up to his little face. And still he continued to sit there. 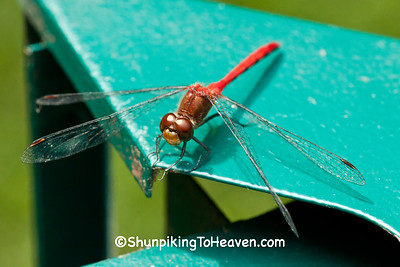 This dragonfly was in the Skimmer family of dragonflies and was either a Cherry-Faced or a Ruby Meadowhawk. Other than examining DNA, about the only way to tell the difference between the two is to examine their reproductive organs, which I certainly didn’t try to do. After taking several photos of the Meadowhawk sitting on the birdfeeder, I said, “You know, that’s not a very nice background. Maybe you could fly over to one of those hostas and let me photograph you there.”

As soon as those words left my mouth, the dragonfly flew up and landed on the flowers of a hosta I purchased shortly after Paul’s passing and which is called “Paul’s Glory.” When I walked over to it, he quickly flew away. I said, “Are you messing with me?” Then he landed on another hosta leaf nearby and sat there until I finished taking a few shots. 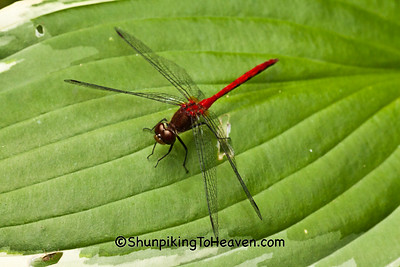 When I finished taking my photos, I thanked him and he flew away.

A week ago, I got out of bed on Saturday morning and discovered two hen turkeys and a whole bunch of little baby turkeys, which are called poults, in my backyard, scrounging for birdseed below the feeder. 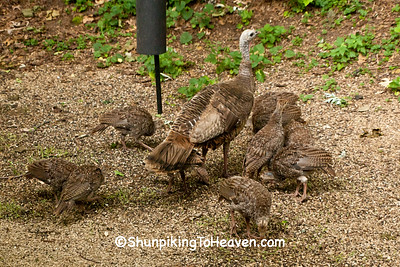 For the past week, they’ve been showing up two or three times each day, so I began counting the poults, which is hard to do when everybody’s moving around so quickly between two birdfeeders, the deck, and the woods. There are a total of fifteen poults!

At first, I didn’t know if I could get any pictures because the mother hens were pretty cautious. But as the visits increased, I discovered that I could stand at the window as long as I didn’t make any quick moves.

And then the mothers and the poults began to lounge around on my deck, either resting or preening. 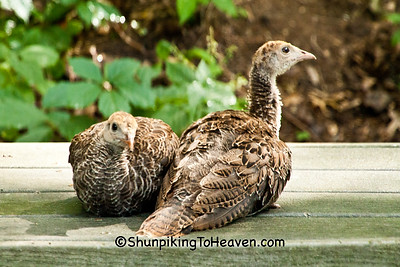 Often the poults see their mother begin to groom her feathers, so they begin imitating her to clean their own feathers.

It’s really fun to see the whole group making its way from the woods to the feeders because the whole understory seems to be moving. 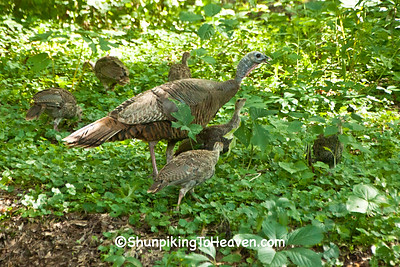 It’s also fun to watch the poults cooling their feet in the birdbath. 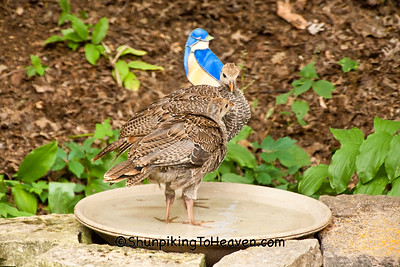 I love the fact that several types of wildlife will feed together. Yesterday, the squirrels and chipmunks were in among the turkeys, scrounging for food on the ground. And there was even a baby bunny eating on the fringes of all the turkey commotion.

Each day, the poults get bigger and bolder. A couple days ago, they began flying up and landing inside my large fly-through birdfeeder. And when two of them are inside the feeder, often a third one will fly up and land on the roof of the feeder.

But then the question is, “How do I get down from here?” After sliding around on the roof for a while, this little poult started squawking as if to say, “I could use a little help, here!” 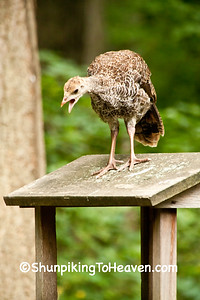 The funniest thing, though, happened two days ago. The turkeys came down earlier in the day and ate every bit of food that was on the ground below the feeders. There are a lot of mouths to feed, so I went out in the afternoon with a bucket of corn mixed with a little bit of birdseed and began to throw a few handfuls on the ground below the feeder.

As the feed hit the ground, it made a splattering sound and then I saw the head of an adult turkey pop up from the understory up the hill. If she could have talked, she would have said, “Did I hear food hitting the ground?” And then, to my surprise, she made a mad dash towards me, making low purring sounds as she came down the hill. I couldn’t believe she actually had the nerve to come within a couple of feet and start eating. So I just said, “You’re welcome,” and returned to the house.

I’m happy that I managed to capture these photos, even though they had to be shot through the window. Today, I realized that I can no longer stand at the window to photograph because the poults are now old enough to be fearful of me. But I will continue to watch and be entertained by them.

In the spring of 2010, on our way home from North Carolina, we crossed a small corner of Western Virginia. Even though it was such a small section of the state, we made the best of it.

One of the locations we passed was an overlook called Lovers Leap. We were in the Blue Ridge Mountains, which were turning an early spring green. 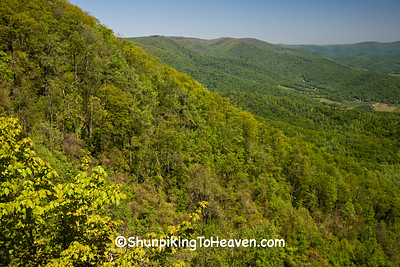 There are multiple locations in the Blue Ridge Mountains called Lovers Leap, and other locations around the country, all with legends of “the leap” associated with them. 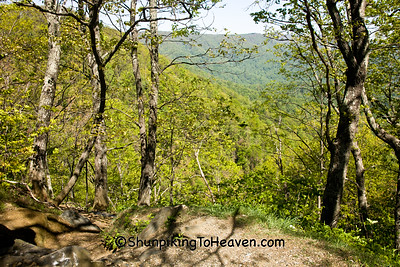 The legend of this Lover’s Leap is that the son of a settler was love-struck when he first laid eyes on the local Indian Chief’s daughter, Morning Flower. They began to meet each other in secret and their love grew.

When the Indian Tribe and the settlers found out about their love, the young couple were threatened and shunned. From this location, high in the mountains, with the trees, rocks, and wildflowers as their backdrop, they leapt together off the mountain so they could be together forever. 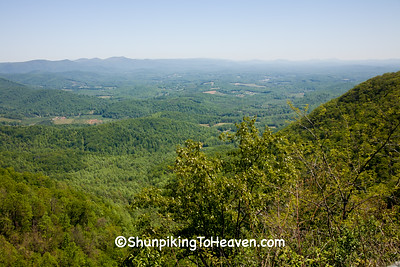 I hope we can return to the Blue Ridge Mountains someday and take in more of the scenery and the old homesteads that were saved along the Blue Ridge Parkway.

Email ThisBlogThis!Share to TwitterShare to FacebookShare to Pinterest
Labels: Virginia

Today is Independence Day and this photograph speaks for itself. 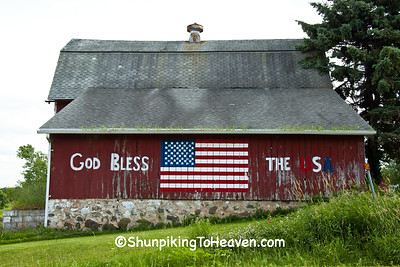