In the summer of 2013, a fellow photographer mentioned that he was hoping to find the time to photograph the sunflowers at Pope Farm Conservancy, a 105-acre park to the west of Madison, Wisconsin. 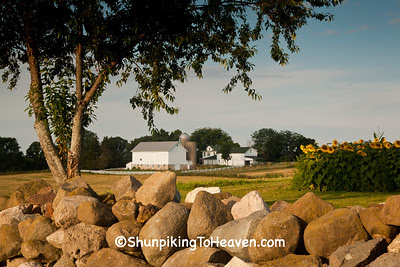 I hadn’t had the opportunity to photograph sunflowers since 2008 when Ruth and I stumbled on a field of sunflowers in Columbia County, Wisconsin. This sounded like a great opportunity, especially since Pope Farm Conservancy isn’t that far from where I live. 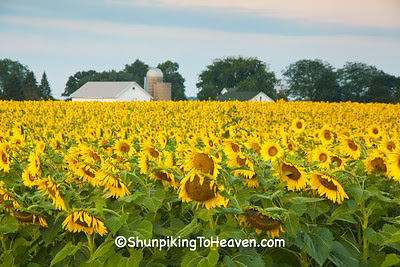 So I checked the sunflower update on the Pope Farm website and it said that the sunflowers were in their prime. Then I checked the weather report and the weather looked good for the following morning. Of course, it was a weekday and I had to work, but I figured there would be plenty of time if I arrived at the park at first light. 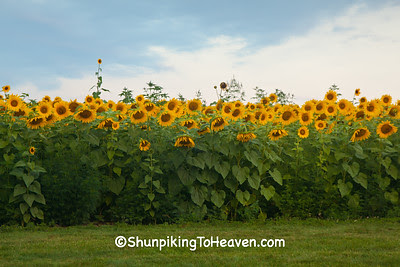 The next morning, I got up very early, put on a pair of blue jeans, put my work clothes in the car, and headed over to Pope Farm Conservancy. It was still dark when I arrived, but by the time I hiked up the trail past the old rock wall, it was starting to get light enough to photograph the sunflowers. 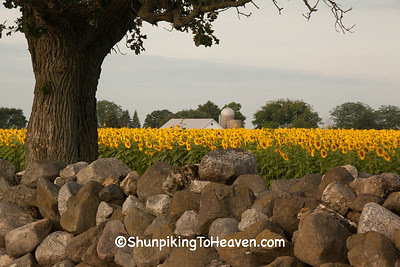 The light was beautiful, which is usually the case during the 20 minutes or so before sunrise. I worked quickly, not only because of the short window of glorious light, but also because I wanted to get to work on time. Other than a couple of people out for an early morning run, I was alone with the sunflowers. 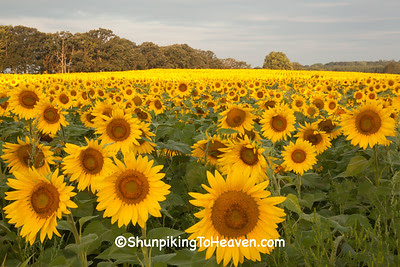 After taking many photos of the vast field of brilliant yellow sunflowers, I decided to get up close and personal. 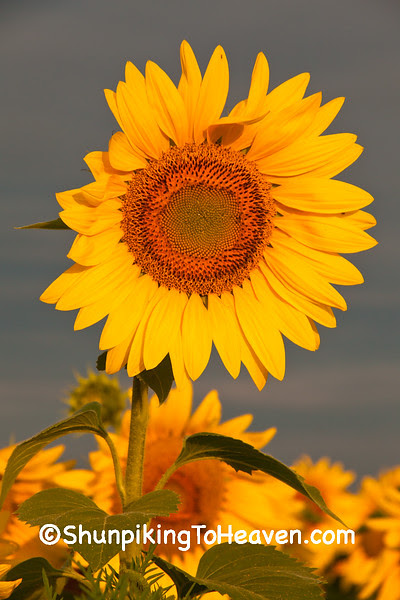 Then I noticed that the bees were early risers too, and they were already hard at work, visiting many of the sunflowers. 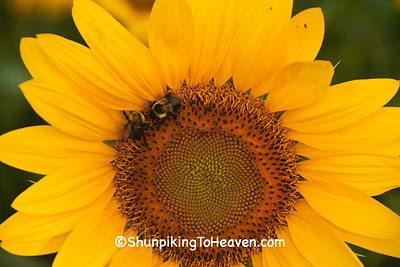 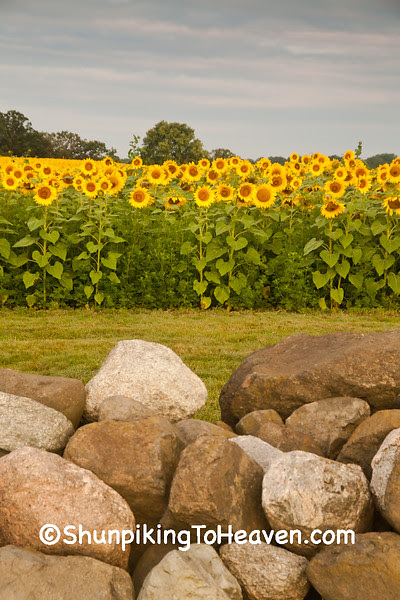 This year, I had planned to return to Pope Farm to once again photograph the sunflowers. However, the prime time for photographing them came and went quickly and I didn’t make it over there. And this year, word of these beautiful sunflowers was in the news and all over social media, and I heard it was jam-packed with cars and people every day. 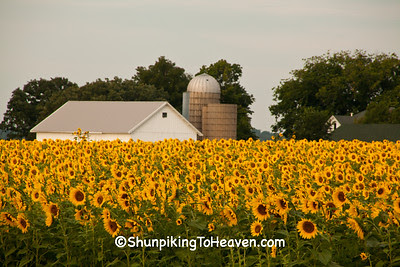 Since I hadn’t found the time in the past two years to process the photos I took in the summer of 2013, I decided it was time to share these with you. And I will leave it on my To Do List to revisit Pope Farm Conservancy in the coming years to enjoy the beautiful gift of the sunflowers. 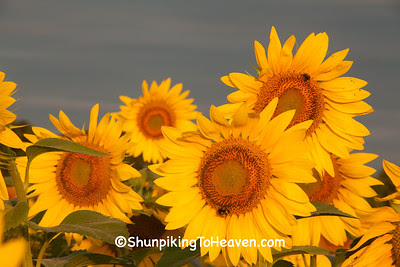 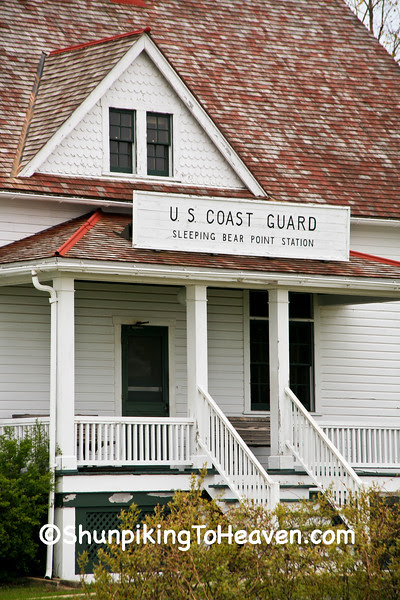 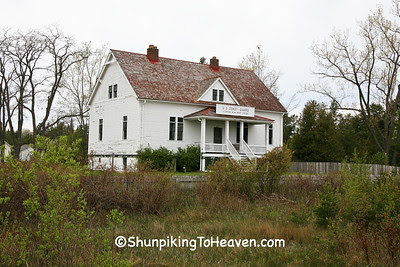 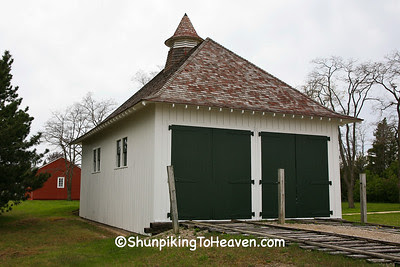 There were 60 such stations along the Great Lakes and many more along the Atlantic Coast. The first keeper of the Sleeping Bear Point station was Captain William Walker of Grand Haven. He brought along a six man crew and his family. 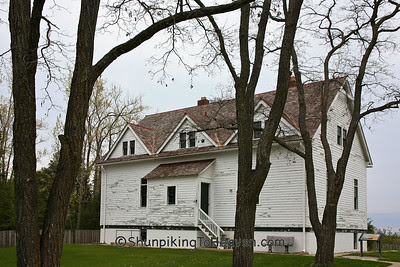 The location of the Sleeping Bear Point Life-Saving Station was more exposed to wind and waves than any other station on the Great Lakes, which made it difficult to launch the rescue boats. In December of 1914, about 20 acres of land at Sleeping Bear Point slumped into Lake Michigan. The same thing happened again in 1971. These events changed the shoreline and made it even more difficult to launch the rescue boats, but the biggest problem was drifting sand. The sand threatened to bury the Life Saving Station buildings. 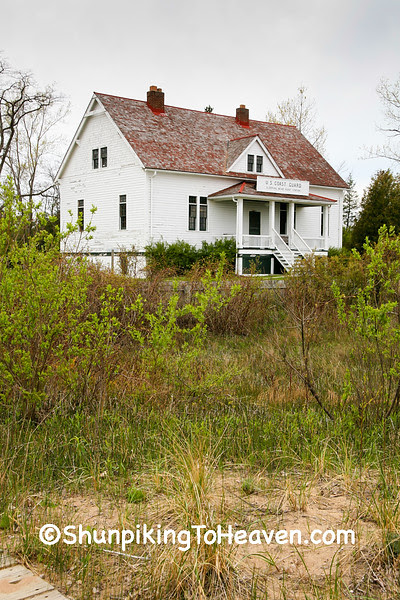 In 1931, the station and other buildings were moved east to their present location. A system of rollers, track, and cables was constructed, and horses were used to pull the buildings over them to the present location. After this move, the station became an “eyes and ears” operation. This meant that they patrolled the shore and relayed communications but rescues were left to a motorized boat stationed at South Manitou. The station closed in May of 1944. 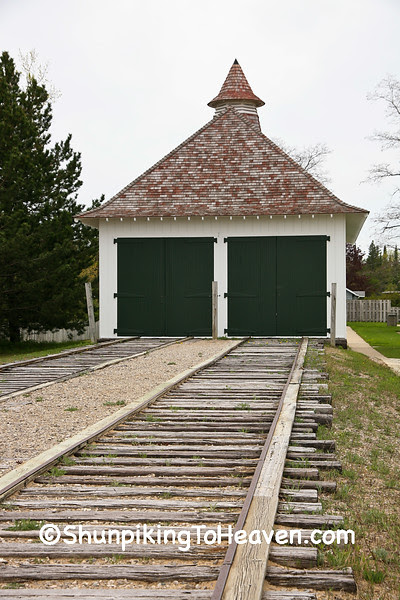 Today you can visit the Maritime Museum to see how the captain and his crew lived, and learn about the rescue boats and equipment that was used. 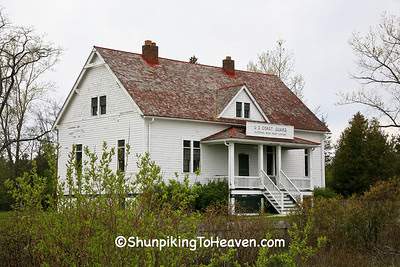 If you visit Sleeping Bear Dunes, make a side-trip to Glen Haven to see the historic buildings.

And a big thank you to all of the current and past Coast Guard members for your service to our country during times of peace and war.

Email ThisBlogThis!Share to TwitterShare to FacebookShare to Pinterest
Labels: Michigan

A ghost sign is an old advertising sign that was hand-painted on the side of a building. Many of these signs are from the 1890’s to the 1960’s. If they have been exposed to the elements for the entire time, they are often very, very faded and hard to read. Painters of these signs were called “wall dogs.” 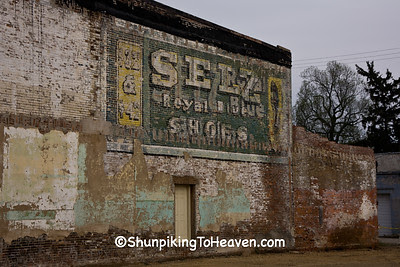 Some people might prefer today’s modern, digital signs, but Joann and I usually find them annoying and distracting. We much prefer the simpler, old-time painted signs. Future blogs will focus on some of the other ghost signs we have found in our travels. 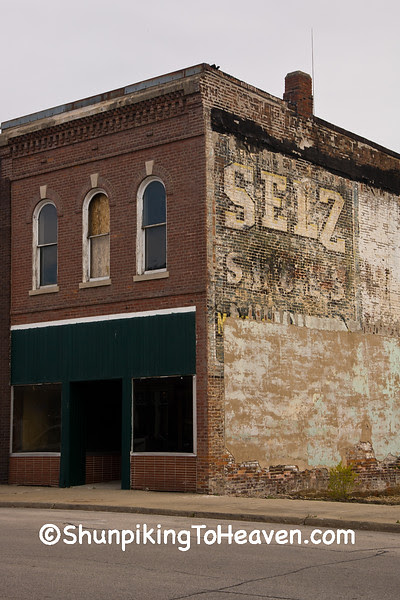 Some towns also have these old painted wall signs that have been restored, as the sign below, in Iowa, was. It’s nice that the repainted sign is legible, but preservationists are now recommending that the original signs be preserved using new products rather than repainting the signs. 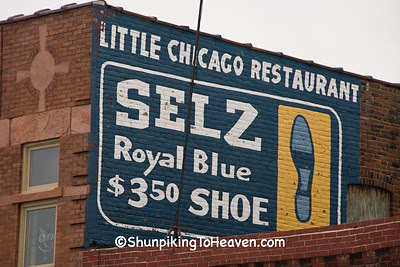 Selz Shoes was a Midwest brand of shoes which had its beginnings in Chicago. The company was founded by Morris Selz in 1871. By the beginning of the twentieth century, they had multiple factories around the Chicago area employing about 1,500 workers, and making 12,000 pairs of shoes per day. 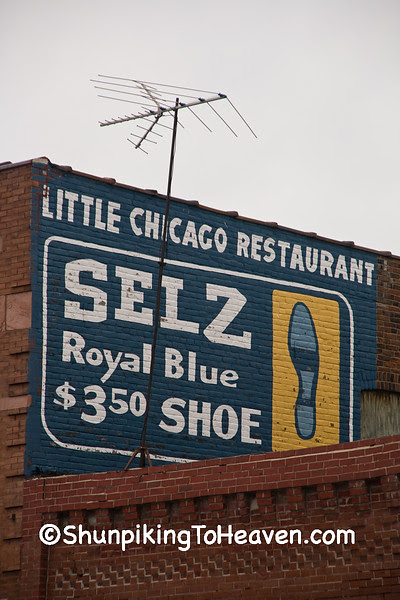 Sometime in the history of the company, the word “Royal” was added to the brand name. Supposedly, this is because the company had been commissioned to make a pair of dancing shoes for Queen Elizabeth when she was young. 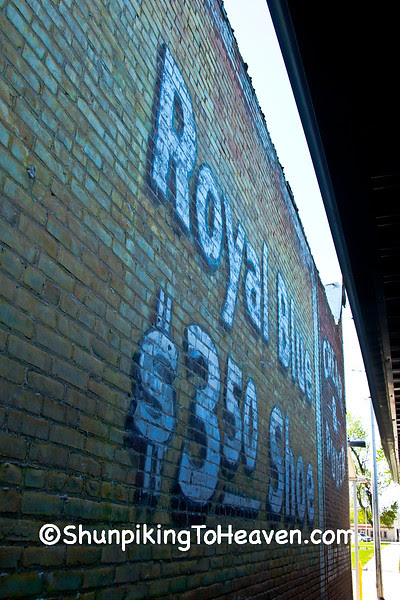 Several years ago, in Kahoka, MO., the brick of an old building failed, and the building was demolished. This demolition uncovered a pristine Selz Royal Blue Shoes ad. I planned this as a stop on our spring trip this year. 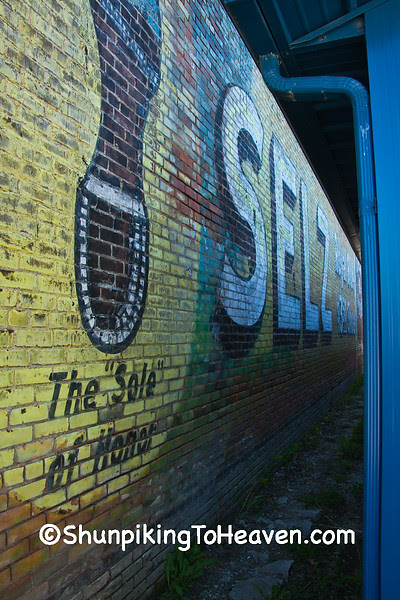 Unfortunately, shortly before we left, I stumbled on a new picture showing the sign and a new building that had been built just several feet from the old wall ad. Bummer! 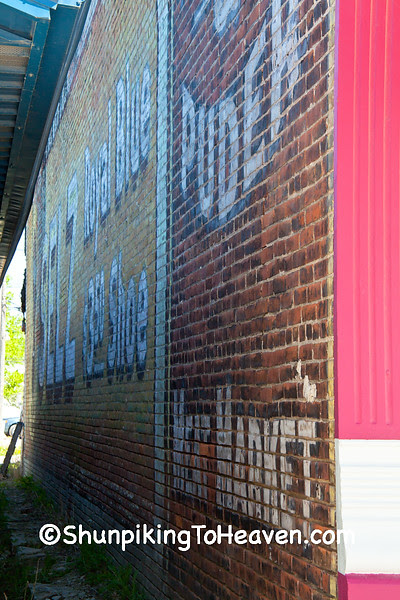 Joann and I discussed it, and decided that we should still go and see what we could get for photographs. How often would we have the opportunity to see an original sign in pristine condition? 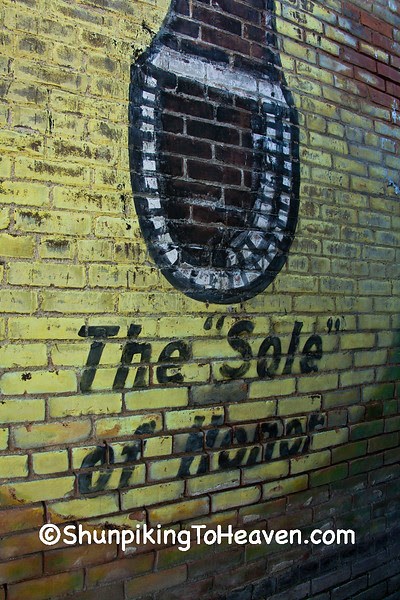 Selz Shoes had several slogans over the years. One was “The Sole of Honor” as shown on the close-up above, and another was “Selz Shoes Make Your Feet Glad”. 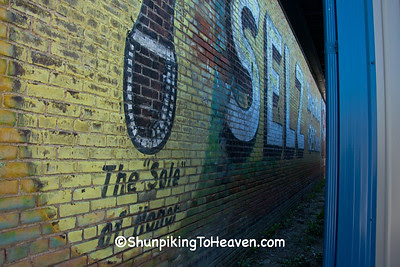 At the height of sales, Selz shoes were sold in almost 20,000 stores. The company was a leader in the shoe trade until the Great Depression. At that time, shoe sales fell, and they were forced to close the factories. 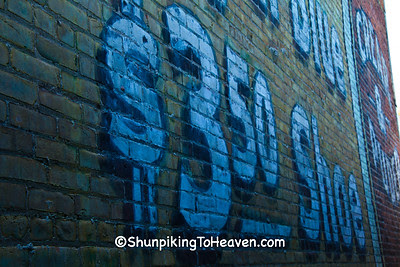 On our way home this spring, we came into a small town in Illinois and noticed a very faded $3.50 and $4.00 sign on the side of an old brick building. Now that we’ve seen multiple Selz Shoes ghost signs, we knew this was originally a complete Selz ad, and now was only a partial ghost sign. 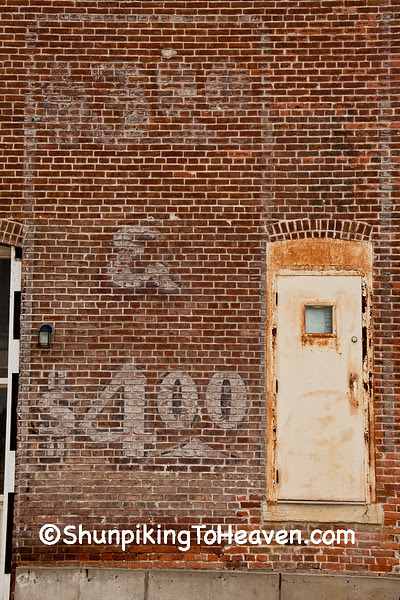 In researching the company for these photos and this blog, we found that the old signs we had photographed in Illinois in 2012 had been repainted. We might travel through again on another trip and take pictures of the restored ads. 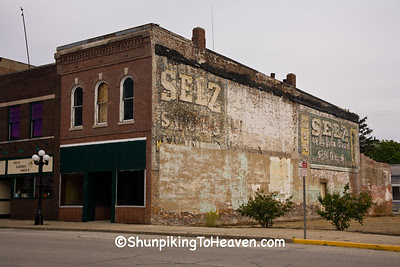 We hope you’ve enjoyed this glimpse into ghost signs. Look forward to more posts about other companies’ painted wall ads.