In the spring of 2006, Ruth and I took our annual photography trip to Kentucky. On one of the last days, we headed for Gravel Switch, a town in central Kentucky that was probably named for the trains that stopped there to pick up gravel from the creek. A short distance from Gravel Switch on a lonely dead-end road is an old weathered general store that has been owned and operated by the Penn family since 1850. 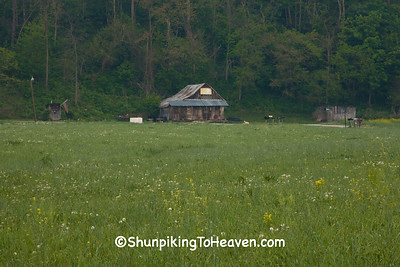 The store is set against the hillside, or knob as they are called in Kentucky. To the left of the store, beyond an herb garden, sits a wooden outhouse that is referred to as Penn’s Privy. To the right of the store sits a pile of coal for the Warm Morning wood and coal stove which is the only source of heat for this old store. 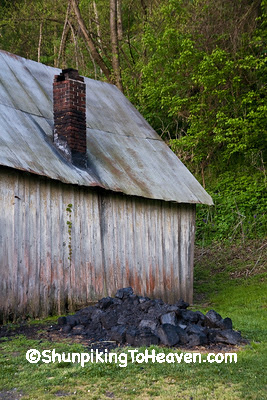 As we approached the front of the store around 11:00 am, we realized that another car had just pulled up in front of us. A couple got out and the woman, realizing that the store wasn’t open, said, “Darn, it’s closed. They’re supposed to be open at 10:00 and they’re supposed to have the best bologna sandwiches. We were planning to have lunch here.” Then she showed us a magazine article about the store and the bologna sandwiches. She was quite distraught over the whole thing and they soon left us to ourselves at this wonderful old store. 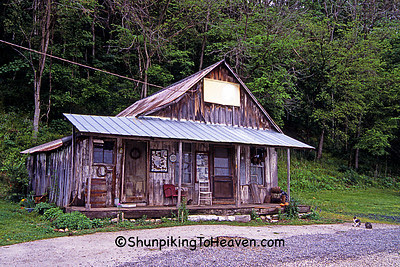 It was a lovely overcast day and the place just radiated a feeling of peace and quiet. We wandered up onto the front porch of the store and read some of the signs that were posted there. One of them gave a brief history of all the Penn family members who had operated the store over the years. Another said, “If you came and no one was here, we’re sorry. We must have had an emergency. Please leave your name and address or email address.” Another said, plain and simple, “Please don’t steal our cats and kittens.” 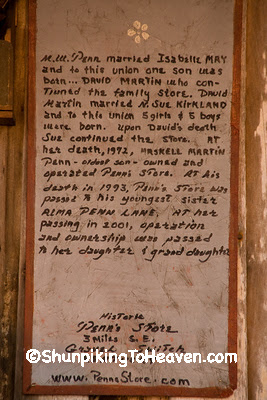 There were cats and kittens lounging on the gravel road in front of the store, which was embedded everywhere with rusty old bottle caps that, years ago, had been tossed on the ground. My first thought was that they were from old-fashioned Coca Cola bottles because everywhere we had been in Kentucky we had seen old Coca Cola signs. But above the porch on the front of the store, hung a fairly large square metal sign, a light greenish yellow in color with a large, but faint, Pepsi Cola bottle cap just barely visible. 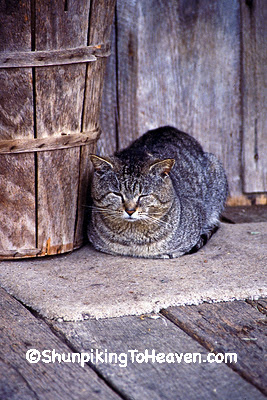 There were also cats relaxing on the old porch or getting into mischief with each other. There was one very large tiger cat who seemed to be at the top of the pecking order because every once in a while he would cuff one of the other cats upside the head to let them know he was the boss. And occasionally, one of the cats would balance on the rim of an old barrel that sat on the left side of the porch and then disappear into the barrel. 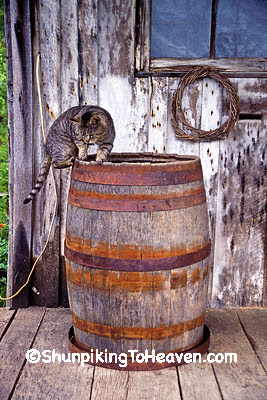 We spent about two hours there that day, just soaking in the ambience of this piece of American history. The true age of Penn’s Store isn’t known because historical records only date back to 1845 when 21-year-old William Spragens ran the store. In 1850, Gabriel Jackson "Jack" Penn purchased the store and it has been known as Penn’s Store ever since. Around 1870, the store was passed to Jack’s oldest son, Martin Wilson “Dick” Penn. Dick Penn was a druggist and was given a grant by the Governor of Kentucky to practice medicine and administer drugs. Penn’s Store dispensed drugs to the community from a large assortment that the store carried. Dick was also a dentist and part of this one-room general store was devoted to dentistry. 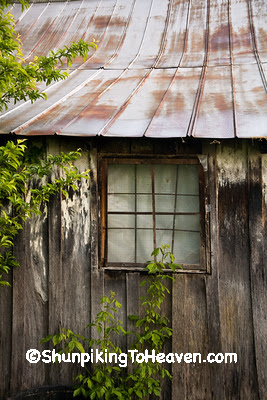 Dick and his family lived in a small log house to the left of the store, with a rock walk running between the house and the store. In 1882, Dick Penn opened the area’s first post office in the small left wing of the store. He was the postmaster until around 1910 when the post office was moved to Gravel Switch. On a hot July 4, 1913, Dick Penn died on the front porch of the store from a heat stroke at the age of 61. 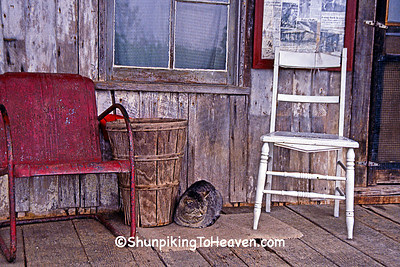 After Dick’s death, his only son, Martin Penn took over as storekeeper. Martin ran the store while also farming with his five sons. Unfortunately, Martin died in a farming accident in 1933, leaving his wife, Sue “Mammy” Penn, and their children to run the store. In 1972, after Mammy died, her son Haskell “Hack” Penn took over as storekeeper. Haskell kept the store open seven days a week and when he died in 1993, his youngest sister, Alma “Tincy” Penn Lane continued this practice. According to an article about Tincy, she was once asked by a visitor to name the oldest thing in the store, to which she replied, “You’re looking at her.” When Tincy died in 2001, her daughter, Jeanne Penn Lane, and granddaughter, Dawn Lane Osborn, took over ownership of the store. 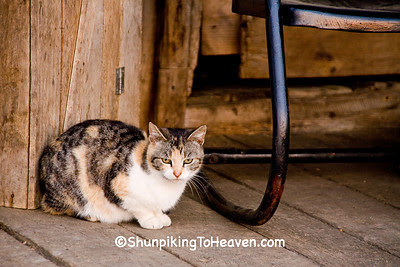 Penn’s Store was the heart of this rural Kentucky community. People came from miles around to purchase goods such as clothing, shoes, hardware, dry goods, farming tools, fabric, and the salt cured country ham and rolls of bologna that hung from the ceiling on large spike nails. It was also the local gathering place where rural farm families could connect with their neighbors. 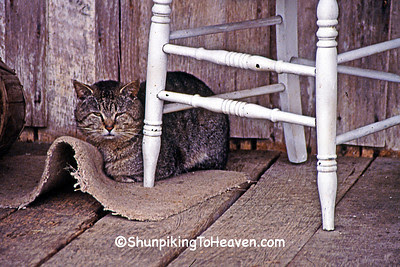 Throughout the long history of this family-owned and operated general store, change was rare. The store still has the original board and batten siding and the same rusty old seam metal roof. Although we didn’t get a chance to see the inside of the store, it was known to still have the original sagging wooden floorboards and shelving, old hand-rubbed countertops, and turn-of-the-century glass showcases. The “cash register” was reportedly a King Edward cigar box. 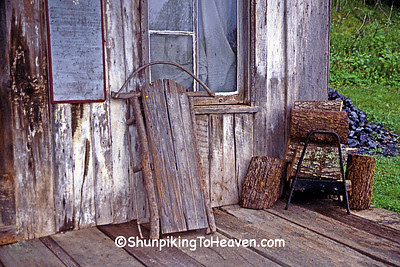 In addition to the store and log house, there used to be several other buildings on the property, including a storage building used to stock a surplus of drugs, a spirits shop, and a chicken coop used to house fowl that the local folks traded for goods at the store. In 1992, Penn’s Store celebrated the opening of its first restroom facilities – an outhouse built of poplar wood and “christened” by country music legend Chet Atkins who was the first to use the new Penn’s Privy. This celebration was called the Great Outhouse Blowout party and it has become an annual event with music and an outhouse race. 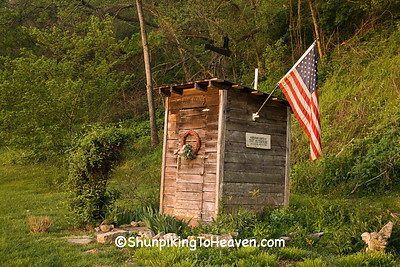 As I began my research for this story, I discovered some disturbing news about historical Penn's Store, which is listed on the National Register of Historic Places and has been designated a Kentucky Historical Landmark. On May 1 of this year, Ruth and I were returning home after many days of photographing in North Carolina. As we came through Kentucky intending to spend our last day photographing on the back roads, we got caught in some terrible storms that began to cause flash flooding. So we headed for higher ground. What we didn’t realize was that the floodwaters basically consumed Penn’s Store, with water rising to the roof of the porch and heavy damage to the structure and the store’s contents. Some of the Penn’s Store animals were rescued by neighbors. Others died in the flood. 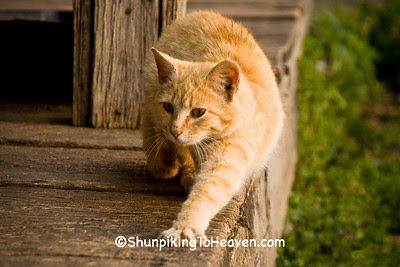 Ruth and I are extremely grateful that we visited Penn’s Store this year for the second time on our way to North Carolina, a week prior to the flood. We will tell you about this second visit in a future blog post. In mid-July, owner Jeanne Penn Lane said she didn’t know what would become of the heavily damaged historical landmark. She has been at a loss on how to proceed and the store remains closed indefinitely. One ray of hope is that on August 4, on the Penn’s Store Facebook page, it was announced that the annual Great Outhouse Blowout party will be held on September 11. We hope this will be a successful fundraising event. In the meantime, if anyone is interested in more information on the status of Penn’s Store, click here. 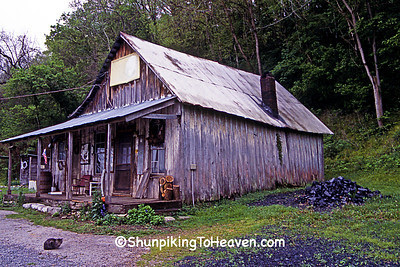 As always, Happy Shunpiking!
Joann
Posted by Shunpiker at 6:12 PM