I think my first absent-minded trick happened in the early ‘90s on a trip to California when I left a backpack full of camera equipment lying on the ground and drove off. By the grace of God, it was still there when I went back. The bad thing about forgetting to put something back into the car is that you don’t realize it’s gone until you go to use it again. By then, you might be many miles down the road.

In the spring of 2007, Ruth and I took a 10-day photography trip to Michigan. By the 8th day, we had been burning the candle at both ends and Ruth desperately wanted to get to our motel early for a change. So that was our goal and we were on schedule to arrive at our motel around 5:30 (as compared to 9:30 or later). We spent a couple of hours that afternoon photographing at a beautiful old grist mill. Normally this wouldn’t have taken that long, but there were also turtles and a robin feeding babies in the nest, which can be time-consuming to photograph. 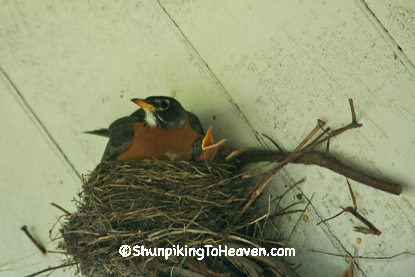 When I finally finished, we headed toward the town where we would stay the night. Ruth was very excited that things were moving along as planned. An hour later, we arrived in the town with the motel, but we decided to see what the evening light was like at an old feed mill we wanted to capture there. If it was good, we would get it then; if not, we would get it first thing in the morning. When we got to the mill, I decided the light was good, so I grabbed my camera and then reached for my tripod. But it wasn’t there. How could it not be there? It’s a good thing Ruth didn’t have a camera to capture the sick look on my face right about then. Had I really driven off an hour ago without putting my tripod back into the car? And then there was the look on Ruth’s face as she realized that, once again, we would be arriving at our motel very late. 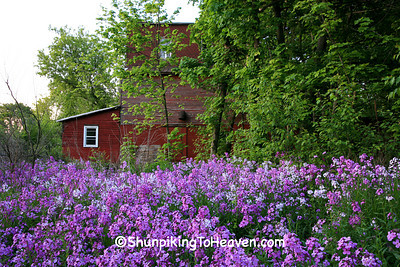 So we just turned the car around and headed the hour back to the grist mill. When we got there, my tripod was standing there in the parking area where I had set it while I was putting my other equipment into the car and telling Ruth what to write down in our photo log. The good news in all of this is that we took the backroads on the way back (since I was no longer in a panic) and we passed some beautiful paint horses. As I was photographing them, the owner’s daughter came past and asked if we would like to buy one of them. I told her they were beautiful, but it would be a long trail ride back to Wisconsin. 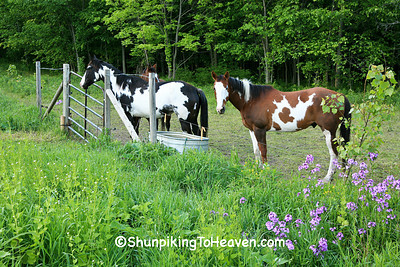 The other great thing we stumbled on was an old blacksmith shop that had a sign that said “Doster Blacksmith Shop.” We’re always pleased when we aren’t left wondering if a building that looks like it might have been a blacksmith shop actually is one. 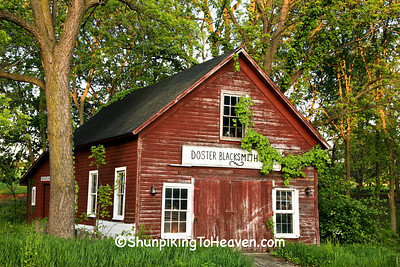 Many years ago, Ruth and I were in Trempeleau County, Wisconsin and had stopped to photograph a round barn. We’re grateful to have captured this barn because it was taken down a couple years later and there is no sign now that it was ever there.

We left that area and drove to the Dells Mill near Augusta, Wisconsin, which is probably about 45 minutes away. As I was grabbing some equipment out of the car, I couldn’t find my wide angle lens. I looked everywhere, but it just wasn’t in the car. This really puzzled me until I realized that I had switched lenses back by the round barn and had laid the wide angle lens on the back of the car “for a minute” while I took one more shot with a different lens. 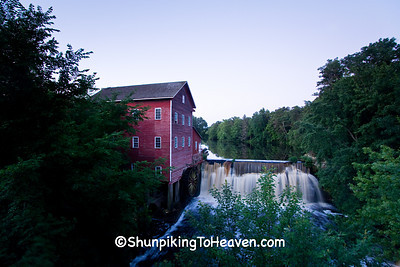 Thinking about where we had been parked, I realized something else. We had been on a hill on a very busy highway, so I had pulled out rather fast to avoid being hit from behind. And there was a rather steep embankment on the other side of the guard rail. I decided that my lens was probably broken and lying at the bottom of the embankment. Ruth, however, was pretty confident that we would find it beside the road. So we drove back and, sure enough, it was lying there at the edge of the road and it wasn’t damaged. I was amazed… and pleased, to say the least. Below is a round barn similar to the one that started this whole adventure.

My most recent act of senility occurred in the spring of 2009. Ruth and I had spent the day photographing on the backroads of Crawford and Richland Counties in Wisconsin. I had taken what I thought was the last photo for the day so I took my loupe (an $80 gadget used for glare-free viewing of the LCD screen on the back of the digital camera) from around my neck and laid it in the back seat. What I should have done was to put it back in its case in the box of camera equipment that is always sitting on the back seat of the car, but I didn’t. 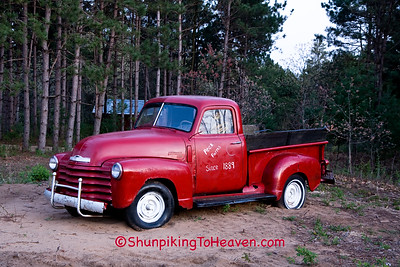 As we headed toward home on Highway 14 and were approaching Peck’s Farm Market, Ruth pointed out an old red pickup truck that was sitting in the woods with a skeleton in the driver’s seat. So I grabbed my camera and tripod, snapped a couple of pictures, put the equipment back in the car, and then we headed home.

The next day, we went photographing in Sauk County, Wisconsin. It was early Sunday morning and we stopped at the church in Leland so that I could capture it in the early morning light. Since the sun was beginning to shine, I reached in my box for my loupe, but I couldn’t find it. Then I searched everywhere in my box, under the seats, in the back, and I was stumped. So I spent the rest of the day photographing without the loupe.

At the end of the day, we decided to go to the place where I had taken the final shots the day before – back to Peck’s Farm Market to see if it had fallen out of the car. When we got there, as we were pulling off the road near the old red truck, Ruth said, “There it is!” I was excited because I didn’t want to have to replace an $80 item due to my senility. So I jumped out and picked it up, only to discover that it was smashed to bits. When I got back in the car and showed it to Ruth, she said, “Oh, shoot, someone ran over it.” I said, “Yes, and I believe that was us. I think it fell out and rolled under the car a bit so I didn’t see it, and then when we left, I drove over it.” 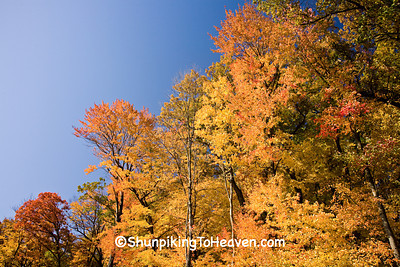 The sad part of this story is that Ruth had given this loupe to me for my birthday a couple months before as a replacement for my first loupe. I had purchased my first loupe shortly after the product was introduced and it had some kind of design flaw that caused the lens to loosen (unbeknownst to me). As I was photographing fall colors at the end of the prior autumn, the lens fell out and smashed on the pavement. And, unfortunately, the warranty had expired by that time.

These are just a few of my “stupid tricks.” I hope they made you chuckle. As far as I’m concerned, it’s all in a day’s work. In the end, what’s most important is that I get the shots.

Posted by Shunpiker at 9:52 PM