A Chance Meeting at the White Light Cafe 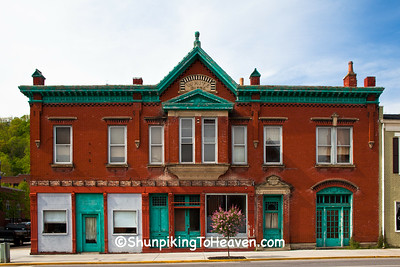 White Block Building, Maysville, Kentucky
The building was constructed of red brick and it had teal green decorative accents. At the top of the building’s center point was a nameplate that said, “White Block.” We often see buildings with this type of name on them. It’s usually the last name of the original owner followed by the word “Block.” Often the year the building was built is shown under the name. In this case, the year 1884 was above a door on the right side of the building. There were several doors, so I’m assuming there were several businesses in this building. Usually when I’m photographing a building that’s close to the street, I need to get back far enough to keep the perspective straight, so it’s a challenge to avoid parked cars. In this case, I was blessed by a yellow curb along the entire front of the building and the best spot to photograph was in the parking lot of the Church of the Nativity across the street. It was a Monday, so you would think the church parking lot would have been empty, but it was parked full of cars. I set up my tripod in the middle of the lot and started taking photographs of the White Block building. After only a couple of shots, a car pulled into the lot, so I picked up my tripod to move it out of the way. But the driver stopped, put down his window, and started a conversation. His name was Richard and he asked me if I would like some information about the building. Well, you can guess what my answer was! 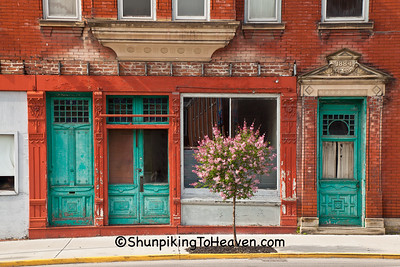 Richard told me that the left-hand corner of this building once housed the White Light Café, home of White Light Hamburgers. He said it was the first fast food restaurant in Maysville in the days before the big chains like McDonald’s and Wendy’s. People would line up on the sidewalk waiting for a delicious burger. He said that you went inside to order and when your hamburgers were ready, they put them in a white paper sack. 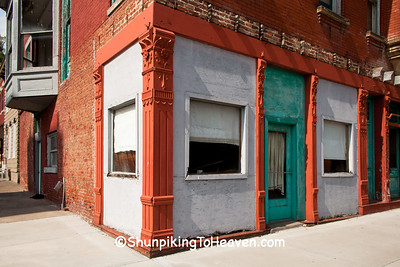 Then Richard described the hamburger itself. It was small, but thick, and was basically a slider (which are typically small). As he gave me the details of the burgers and the building, his wife smiled and nodded and, several times, she seemed to want to join the conversation, but Richard always (lovingly) spoke for her. He said that she was born and raised on a farm in the Maysville area and that her family often came downtown to get some White Light Hamburgers. 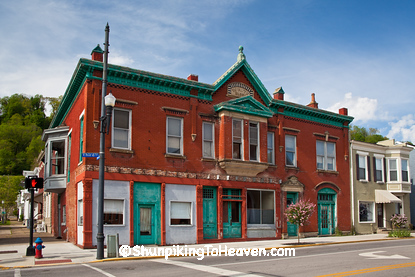 Hearing that his wife had grown up on a farm, I shared a little bit about growing up on a farm myself. Again, she seemed to have something to say, but couldn’t quite get the words out. I wasn’t sure what the problem was, but I waited patiently as she tried to say a few words. Then Richard apologized for his wife’s struggles and thanked me for my patience. He said that she had Alzheimer’s and that her doctor said she would continue to remember her childhood. So, he decided to bring her back home to Maysville and she was enjoying her childhood memories. Her family farm had been sold, but many of the buildings were still there and she remembered living there. Such a sweet couple they were! After they left, I crossed E. Third Street to take a few close-up photos of the building detail. Richard had told me that he thought there used to be a pickup window on the side of the café that faced Limestone Street. As I was standing there with my tripod, an old man came down the sidewalk and stopped to tell me that he used to come to the White Light Café for their famous hamburgers. So, I asked him about the pickup window. He said that you had to place your order inside, but then you could wait for your food outside at the pickup window. The White Light Café may have gone out of business years ago, but the burger lives on. The recipe was purchased by the owner of a new restaurant called the Drive-in, which opened in Olive Hill, Kentucky. Olive Hill is only about an hour from Maysville, so anyone who longs for an old-fashioned White Light Hamburger can still get their fix by taking a short road trip. And speaking of road trips, when you’re on one, don’t be afraid to strike up a conversation with a local. You’ll probably learn some interesting history! 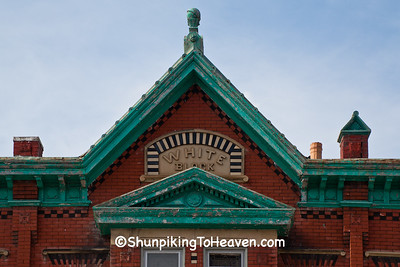 When I first began reviewing listings from the National Register of Historic Places and marking them as places to photograph, I was pretty selective. After I marked what I thought would interest us, I passed the list to Joann to review and see if there was anything else I should mark. And when she returned the list with things I had missed, she had marked some things called Granges, or Grange Halls. 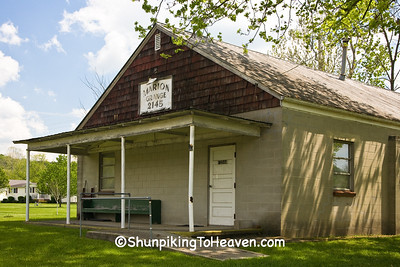 The Grange, formally known as the Patrons of Husbandry, was founded in 1867 by Oliver H. Kelley, who was an employee of the Department of Agriculture. Its purpose was to assist farmers with difficulties they faced. Among the problems of the time were swarms of grasshoppers, high railroad fees to ship crops, expensive machinery, high interest and mortgage rates, high cost to store their grain in silos, and falling prices. 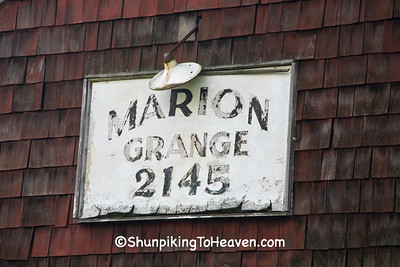 We’ve had the best luck finding old Grange Halls in our travels to Ohio, which seems understandable since Ohio was reported to have more than 900 chapters. Not only were the halls places to hold meetings, but they were also a place to hold social activities which included quilting bees, dances and other social gatherings, which helped to alleviate the isolation of farm families. 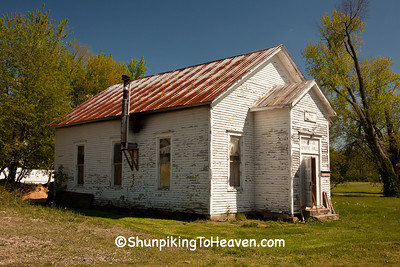 Some of the granges even bought a few pieces of the more expensive farming equipment that could be shared among members. Our dad was never a “granger”, as members were called, but he never owned a combine. He hired a neighboring farmer who owned one (as many farmers did) to harvest our oats. This helped the farmer making payments on his combine, and allowed dad to not have the expense of his own machine. In 2016, we hunted up the Scioto Grange No. 1234 in Jackson County, Ohio. It was built in 1897, the same year the Chapter was organized. It’s a simple white frame building, but part of the building served as a store for members from 1907-1937. It also served as a rural school from 1917-1935. The building is listed on the National Register of Historic Places. 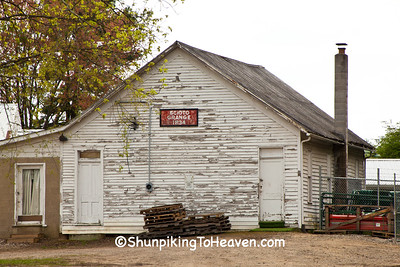 Wisconsin had approximately 50 grange chapters. The chapters in Evansville, Cooksville, Magnolia, Brooklyn, Dayton, and Center banded together to form the Evansville Mercantile Association. In February of 1874, they bought $200 worth of plows and were in business. At first, they rented space, but soon outgrew it. They built a new building, but within a couple of years, outgrew that space as well. In 1903, they purchased land on West Main Street in Evansville and built a new store. The store was huge for its time and employed 30 people. It had a bank and departments for groceries, eggs and butter, dry goods, boots and shoes, carpets and wallpaper, jewelry, books, crockery, hardware and tin, millinery, coats and suits. Two years later an undertaking business was added and a hearse was acquired.

The Evansville Mercantile Association continued in business for 81 years, when the store was sold to another group of men who operated it until 1980. 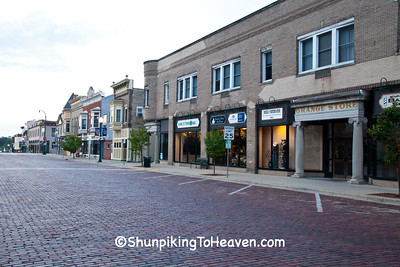 Another old building we found in Ohio was identified as a one room school and former grange hall. Most abandoned buildings that we find don’t have available histories, and it’s true of this building. It’s big enough that it may have included a grange store as well, but we probably will never know for sure. 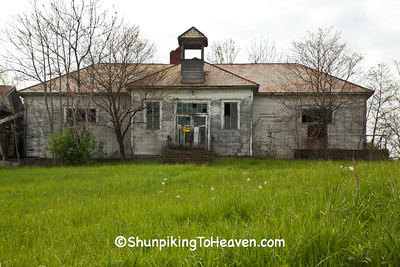 On our most recent trip to Ohio in 2017, we hunted up several more grange halls. One of my favorites was the Sandy Valley Grange No. 1704 shown below. It’s another on our list where we know it was a grange hall, but the last meetings I could find were held in 2012. 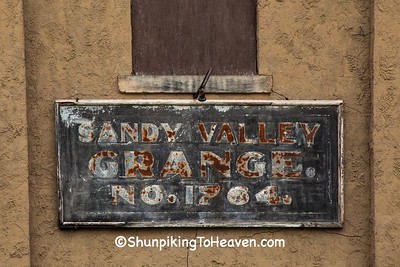 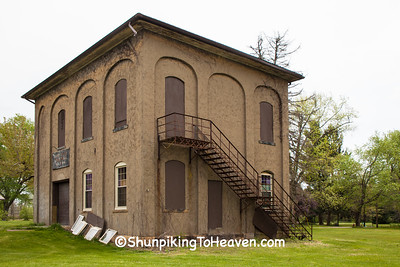 The Willow Grove Grange shown below, is still an active chapter holding their meetings in the building as well as providing meeting space for other organizations. 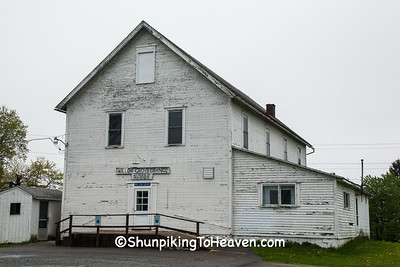 The National Grange headquarters building is in Washington, D.C. and is the only private building in a federal block across from the White House.

With the current state of farming in the country, it’s nice to know that there is still an organization trying to stand up for farmers on a national level.

If you’re walking around any town, don’t forget to look up at the symbols and name plates on buildings. You never know what you might stumble on. Let us know if you find a grange hall!