In early October 2010, Ruth and I left my house around 5:30 a.m. and drove an hour west to begin our day in the small town of Muscoda, in Grant County, Wisconsin. As we crossed the Wisconsin River a little after dawn, we realized that we should have gotten there earlier.


The tree-covered banks and a small island were silhouetted against a beautiful dawn sky and mist was floating above the water. The bridge over the river is quite long and, of course, you can’t park on the bridge, so we drove to the other side of the river and found a small parking lot. I knew I had only a few minutes to capture this beautiful scene before the sun came up, so I grabbed my camera and tripod and ran to the center of the bridge.

The sky changed rapidly from peach to purple to orange within a matter of minutes and I worked quickly, moving to different locations on the bridge to change the viewpoint a bit.

As the time for sunrise approached, a large dark blue cloud moved in just above the horizon and I was surprised to see the amount of mist increasing. The mist added to the mystery of the river and I was grateful, as always, to capture the glorious light of dawn.

We had planned to use those precious pre-sunrise minutes to photograph some architecture in Muscoda, but I couldn’t pass up the beautiful river scene, so we hurried in to town as soon as I got back to the car. I’m always on the lookout for a good fall color scene, so the first thing I captured in town was a church steeple with a beautiful maple tree in the foreground. 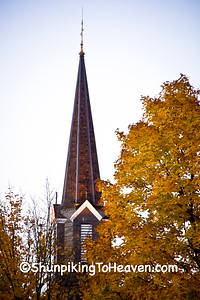 Next we headed to the old Muscoda Theatre. As it is with many old theaters, especially in small towns, this theatre hadn’t shown a movie in quite some time.

On the other side of town, as we turned west to head for the backroads, we passed an old tin-clad building. It was fairly nondescript, so we….Wait a minute! There was something on the back side of it. Could it be a ghost sign? We had to turn around and find out.

Well, our eyes hadn’t deceived us because, sure enough, there was a faded sign on the building. Unfortunately, it was only part of the sign because at some point a long addition had been added to the back of the building, covering up the left side of the sign.

It’s rare that we see a ghost sign on a tin-clad building. In fact, usually, tin was installed on top of the wood to keep it from deteriorating. So, signs that had been painted on the wood ended up hidden by the tin siding.

At the top of the rusted tin siding were the letters “NS CO.” We’re assuming this was the last part of the name of the company that owned the building at one time. And below that were the familiar slogans, “Why Not Now?” and “Easy To Bake.” Although we couldn’t see the familiar oval of typical Gold Medal Flour signs, we recognized the slogans.

If you’d like to learn more about Gold Medal Flour and other ghost signs, read Ruth’s blog post of March 30, 2016 entitled “March is National Flour Month.”

On an autumn trip to the north
To the town of Crandon we came
So at dawn I stood on the street
To see what was calling my name.

The old Hotel Crandon spoke out
And a sign for Ducks Bar beckoned me
But a fancy brick lodge for the masons
Was the loveliest thing I could see.

As I entered the crosswalk to start,
A man strolled leisurely by;
“It’s a beautiful day!” the man said,
“Yes, it IS!” I said in reply.

“If only I would have known
You wanted a picture of me,
I would have combed my hair
And dressed with more dignity.”

I looked at the hat on his head
And thought that he might be bald
Then something came out of my mouth
And I hope you won’t be appalled.

I asked with a grin and a giggle,
“Do you HAVE any hair 'neath that hat?”
So he lifted the hat as he said,
“A couple, and that is that.”

Then he passed me and turned back around,
And said, “What are you up to today?”
“Oh, about five foot six,” I replied,
As his head began shaking away.

“You’re really on your game,” he remarked,
As I shrugged and said, “Have a nice day!”
And our brief encounter was over
As he smirked and walked away.