By Phyllis Ringelstetter Buskager
Far above the farm fields, and nestled in the trees atop the highest elevation in southeastern Wisconsin called Holy Hill is the Basilica and National Shrine of Mary Help of Christians. Located near Hubertus, Wisconsin, on 435 acres, this religious pilgrimage site is visited each year by about 500,000 people from all over the world. Many come to meditate, or to worship, or to pray for healing. Some come as tourists, to admire the architecture of the Basilica, or to enjoy the serene beauty of the hill and surrounding area.

Holy Hill Basilica, Washington County, Wisconsin
The idea for this blog post came from a recent email exchange with our aunt, one of our Dad’s sisters. In that email exchange, she reminded us of some family history information that we had forgotten about – that our grandparents traveled over 100 miles from their home in Sauk County, Wisconsin to Holy Hill and Milwaukee for their honeymoon in May of 1919. She’s not sure what their mode of transportation was; possibly they drove or possibly they took the train to Hubertus and Milwaukee. Our aunt tries to make an annual fall visit there, which she did again this year. She said she thinks that she especially likes to go there because of our grandparents’ honeymoon visit to Holy Hill. Our Grandparents on Their Wedding Day,Sauk County, Wisconsin
The Holy Hill website provides an extensive history of this holy place. It’s believed that Holy Hill was discovered and mapped by Jesuit missionaries who were working in the area in the late 1600’s. In the mid 1800’s, a French hermit named Francois Soubrio found an old diary and a parchment map dated 1676 while working as an assistant to a retired professor in Quebec, Canada. The diary told how the author had placed a stone altar, raised a cross, and dedicated the hill to Mary, the mother of Jesus. Carmelite Cemetery, Holy Hill, Wisconsin
Irish settlers were the first to call the area Holy Hill and the name was first formally used in 1863 when Fr. George Strickner was dedicating a log chapel as the first Shrine of Mary – Help of Christians.

Grotto of Our Lady of Fatima, Holy Hill, Wisconsin
For thirty years, local priests were assigned to care for Holy Hill. Fr. Ferdinand Raess was the caretaker for eight years beginning in 1875. Fr. Raess oversaw many improvements during that time, including grading the road to the top of the hill to allow teams of horses to haul building materials to the top. 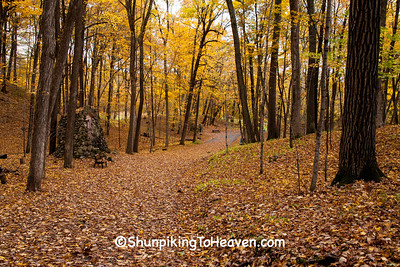 Way of the Cross Trail, Holy Hill, Wisconsin
Fr. Raess also hired a local artisan, George Klippel, to build the first stations by the side of the graded path. These stations were simple wooden crosses with pictures of Christ’s passion attached. 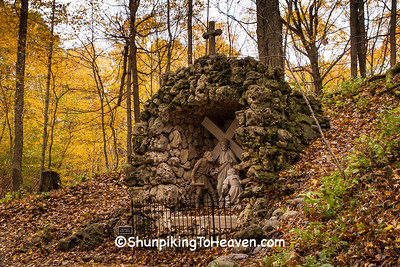 Station of the Cross, Holy Hill, Wisconsin
In early 1879, Fr. Raess worked with a Milwaukee Architect, H. C. Koch to draw plans and cost estimates for a second shrine church. Getting the bricks and materials to the top of the hill by horse teams was going to be extremely difficult. John Rover, a brick maker from Sheboygan found quality clay on a corner of the hill so bricks could be made there. And during the excavation of the hill to level it for the foundation, enough fieldstone was found to build the church foundation, reducing the number of horse-drawn trips required. Construction work began in the spring of 1879 and the church was completed for a cost of $5,000.

Holy Hill Basilica, Washington County, Wisconsin
The new church was seventy-six feet long, forty-six feet wide and the walls were twenty feet high. The roof was steep with a steeple and gilt cross on top. The chapel elevation was about sixty-eight feet.

Steeple of Holy Hill Basilica, Washington County, Wisconsin
From 1883 to 1893, Fr. Nicholas Zimmer, pastor of St. Kilian’s in Hartford was the caretaker of Holy Hill. He added a bell tower and a 1,200 pound bell (the largest of the three bells used today), three Gothic altars, and the second set of stations made from brick. Fr. Zimmer was succeeded by Fr. John Bertram in 1893. Fr. Bertram added the first Lourdes grotto, a new pipe organ, and oversaw many necessary repairs. Side Altar at Holy Hill Basilica, Washington County, Wisconsin
After Pope Leo XIII declared Holy Hill a Shrine in 1903, many more pilgrims began coming to Holy Hill by taking the train to Hartford or Richfield and then traveling to Holy Hill by horse-drawn carriage. Many came to pray for Mary’s intercession to the Lord for their healing. Pilgrims often left crutches and canes at Holy Hill as evidence of prayers answered, a practice that continues to this day. 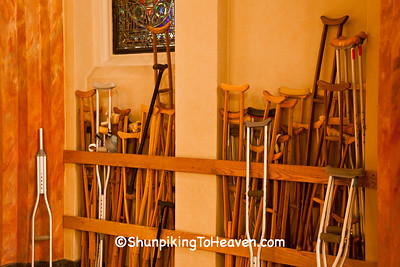 Crutches Left at Holy Hill Basilica, Washington County, Wisconsin
Because of the increasing number of visitors, the Milwaukee Archdiocese officials decided that Holy Hill should be cared for by a religious order. In June of 1906, Holy Hill was placed in the care of the Discalced Carmelite Friars from Bavaria, an order dedicated to Mary and well suited to care for her shrine at Holy Hill. The Lourdes Grotto in the next photo reproduces the scene of the apparition of the Virgin Mary to St. Bernadette in Lourdes, France in 1858. Holy Water is available at this grotto during warmer months.

Lourdes Grotto, Holy Hill, Washington County, Wisconsin
In 1914, a sculptor from Milwaukee, Joseph Aszklar, was commissioned to create the third and present set of the Stations of the Cross at Holy Hill. 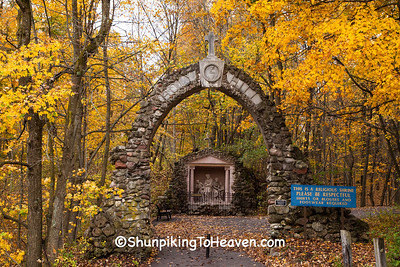 Entrance to Stations of the Cross, Holy Hill, Wisconsin

These are life-sized statues made of Bedford Stone and each scene is set in a fieldstone grotto.  It took the artist fourteen years to complete the stations, finishing in 1928.  This means that our grandparents’ honeymoon visit in 1919 occurred five years into this 14-year effort.  At that time, they could only imagine how grand the finished project would be.  And the beautiful basilica that now stands atop Holy Hill hadn’t been commissioned yet, so they would have visited the second shrine church, which no doubt seemed glorious to them. 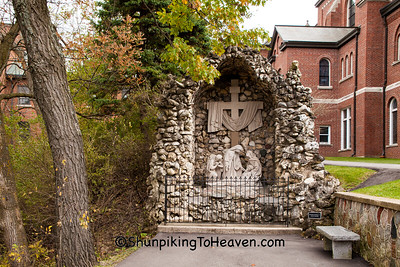 Station of the Cross, Holy Hill, Wisconsin
In 1925, construction of the third and current shrine church of Our Lady – Help of Christians was begun. On September 8, 1925, the feast of the Nativity of Our Lady, the final services were held in the second shrine. It was a tearful and moving time for many. In order to construct the new shrine church, the second church was razed and Fr. Bertram’s Lourdes Grotto was also destroyed. During construction, a small chapel on the grounds was used, the St. Thérèse Little Flower Mission Chapel. Considered possibly the most popular saint of recent centuries, she was a Discalced Carmelite nun from Lisieux, France, who died in 1897.

St. Thérèse Chapel, Holy Hill, Washington County, Wisconsin
The cornerstone of the third and present shrine church was placed on August 22, 1926 by Archbishop Sebastian G. Messmer. Written in Latin, the inscription translates as follows: “Because of the increased numbers of those honoring the helper, the Blessed Virgin Mary, l am already the cornerstone of the third temple on the summit of this mount. In the year of Our Lord 1926.” With construction complete, the new Shrine of Mary – Help of Christians at Holy Hill was dedicated on July 19, 1931. This Romanesque Revival Catholic church is on the National Register of Historic Places. 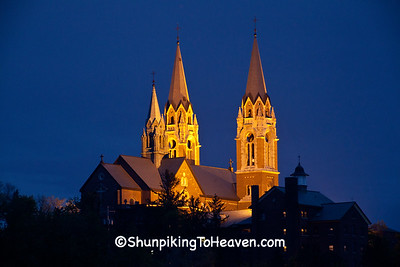 Holy Hill Basilica, Washington County, Wisconsin
At the center of the sanctuary of the current shrine church is the main altar, which took two years to build. The altar proper is sculptured from Tavernelle marble and weighs more than forty tons.

Holy Hill Basilica, Washington County, Wisconsin
The tabernacle, which weighs 500 pounds, has a triple crown at the top, representing Christ as prophet, priest, and king. 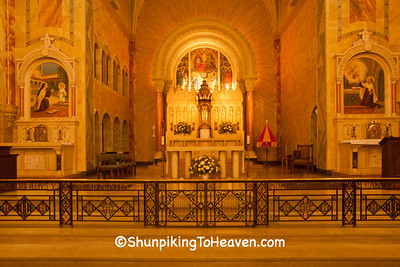 Sanctuary at Holy Hill Basilica, Washington County, Wisconsin
Besides the natural beauty of this area, there is a great religious significance to the location for this place of sacred pilgrimage. Throughout the bible, God often called His followers to high places for prayer and to speak to them. So it is fitting that pilgrims and tourists alike climb the steep path through beautiful woods to the top of Holy Hill.

Holy Hill Basilica, Washington County, Wisconsin
The sacred structures and shrines of Holy Hill are located 1,335 feet above sea level on about 40 acres of land that was dedicated to this holy place in the mid 1800’s. The Discalced Carmelite Friars acquired 400 additional acres of the surrounding natural woodland to preserve the contemplative nature of this serene area. 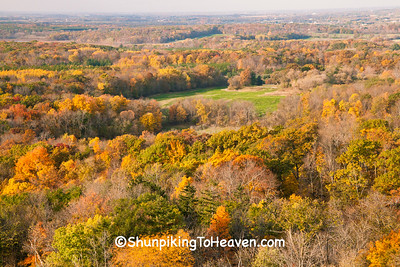 View from Scenic Tower, Holy Hill Basilica, Wisconsin
Holy Hill and the surrounding area is a wonderful destination to experience and appreciate the peaceful, serene, natural beauty of this earth that we call home. Happy Shunpiking!
Phyllis
Photos in this blog post can be purchased as wall art, paper prints, downloads, phone cases, and keepsakes by clicking on the photo. You will be taken to the gallery website where you will see a big blue "BUY" button. Or to see all photos available, click on the "Browse Galleries" button on the menu at the top of this page. Thank you for your interest!
Posted by Shunpiker at 8:33 PM 12 comments: