Somehow the year has flown by and we are already at Thanksgiving. Is it the same for you? Does the holiday season sneak up on you, too?

We love to see the fall displays, but all too soon, fall is over and the winter cold and snow arrive.

Earlier this fall, Joann and I were driving down a country road in western Wisconsin. As we drove past a house, we both noticed the turkey sculpture in the yard. One glance at each other, and Joann started looking for a place to turn around.

It makes you wonder what people were doing when they had this sort of idea. We knew he would be our Happy Thanksgiving turkey this year.

Whatever you do for the day, whether it is hosting family or friends, or travelling over the river and through the woods to someone else’s house, have a safe and happy Thanksgiving!

Two years ago, on an autumn trip to Minnesota, Ruth and I visited the Portland Prairie Methodist Episcopal Church in Houston County. 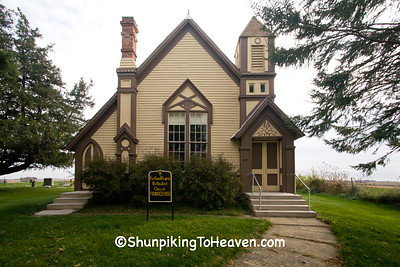 In 1855, six years after Minnesota became a territory, Methodist settlers from the states of Rhode Island, Massachusetts, and Connecticut, organized the church. At first, services were held in homes and then in the McNelly schoolhouse until the church was built in 1876 at a cost of $1,540.

The church was built in the Eastlake architectural style, which is part of the Queen Anne style of Victorian architecture. This style is known for its attention to detail and decorative wood trim.

The oldest known photo of the church shows a prairie-like setting with few trees. Now there are several large trees near the church, but it is still surrounded by farm fields, a reminder of the original agricultural community of Portland Prairie.

Behind the church is a simple, well-kept cemetery that is the final resting place of some of the original pioneer settlers. Many of them had traveled by train from Chicago to Rockford, Illinois; by stagecoach to Galena, Illinois; by riverboat to Lansing, Iowa; and then by ox team or on foot the last 20 miles to Portland Prairie. The oldest person buried in this cemetery was born in 1770 and died in 1857. 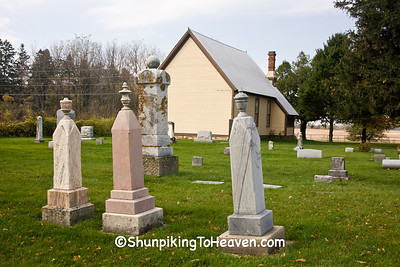 If you’re a faithful reader of these blog posts, you know that I always check the doors of old churches and schools to see if they are open. In this case, to my absolute delight, the doors were open and welcoming. Just inside the doors was a vestibule with a church bell rope hanging down from the bell tower and attached to the wall. It beckoned to be pulled, but Ruth and I resisted the temptation.

Beyond the vestibule, the doors led to rows of old wooden pews, with worn-out hymnals in every pew. An old-fashioned pump organ sat in the corner at the front of the church.

Instead of an altar in the front center of the church, a simple podium stood in front of an antique Victorian sofa.

In the early days of this church, Portland Prairie was a thriving community with 35 families belonging to the congregation. Services were provided by circuit riders who ministered to several rural churches. In the 1880s, pioneer families were devastated by crop failures and many moved on to the Dakotas and Nebraska.

Over the years, a total of 39 ministers have served in this simple, pioneer church. In 1932, regular services ended and the remaining families began transferring to the nearby Caledonia Methodist Church. Special services, such as weddings and baptisms are still held occasionally in the church. Also, there are two annual worship services – one on the last Sunday of July with a hymn sing prior to the service, and one on Christmas Eve.

The setting for the Christmas Eve service is rustic, with no heat or electricity and the church is dimly lit with candles and a few kerosene lamps. People say it reminds them of a cold stable and a lowly manger scene from a long, long time ago.

Last Sunday, Ruth posted a Quick Pic of the Grim Reaper waiting, which I captured in Filmore County, Minnesota. After that grim encounter (smile), we then headed for the backroads. As we came around a corner, we saw a farmer harvesting corn with a combine.

The combine was moving away from us at a quick pace, stirring up dust as it gobbled up the rows of corn. I pulled the car to the side of the road, jumped out, grabbed my camera, and snapped a photo. The combine continued to move quickly and started to disappear over a small hill. So I snapped another photo.

I love the look of fields of golden corn and am always disappointed when corn is chopped early in the fall before it has a chance to reach the golden stage. But I also like to see the harvest in action and this action was gone all too soon. As the combine totally disappeared over the hill, I wondered for a second if we should hang around and wait for the combine to come back. But it was a very large field and there was much for us to do that day.

And now, as most of the autumn leaves have fallen to the ground and the harvest season is nearing an end, I am saddened by the lack of photo opportunities. But soon the snow will make its appearance and we will once again hit the backroads in search of winter’s peace.

We were just looking for a parking place so Joann could take a picture. It was October of 2011 and we were in Southwestern Minnesota. As Joann got out of the car to get her equipment, she glanced toward an open door of a building and saw the Grim Reaper waiting in the lobby. She stepped inside to ask if she could take a picture of the display. She called out “Hello?”, but no one answered. She called again and still got no answer.

She took a couple of photos and then went out the door and on to what we had really stopped for. I wonder if he’s still waiting.

Hope your Halloween was a great end to the fall season.

Posted by Shunpiker at 11:41 AM No comments: