In April 2017, after having taken four previous trips to the southern and central parts of Ohio, we decided to return with a focus on northern Ohio. On the afternoon of our first full day in that beautiful state, we traveled the Lincoln Highway to the small rural town of Gomer. In her research, Ruth had discovered a large American Gothic barn and we knew we had to go find it. 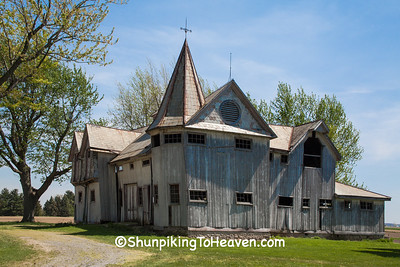 As we drove through the small residential section, we noticed the town hall for Sugar Creek Township. In front of this old-fashioned town hall building was a historical sign. It said, “1833, Gomer, Ohio, A Welsh Settlement. A village settled by the Watkins, Roberts, and Nicholas families, bringing with them their Welsh traditions and establishing a community in honor of their native land.” 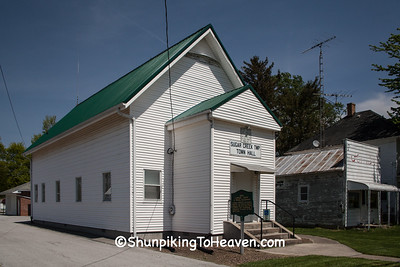 We left these two interesting buildings and started looking for the barn we had come to see. But it was sitting a long distance back from the Lincoln Highway and we couldn’t really get a good look at it. So, we drove into a church parking lot hoping to find a good place to view the barn. The parking lot was lined with large evergreen trees, so it wasn’t looking good. I got out of the car and walked to the edge to peer between the trees. And there it was, a good view of the farm but, again, it was quite a distance away. In the photo below, you can see the view I had, with a pump house on the left, the barn in the center, and what I thought was probably a granary on the right.

I figured the only option I had was to use my biggest zoom lens and take just a couple of photos due to only one angle being available. But there was an angel on my shoulder, as there often is when I am photographing. As I stood there desiring to get closer to this gorgeous and historical barn, a lawn tractor came zooming across the lawn near the barn. I quickly walked towards it to see if I could get permission to photograph the barn up close. 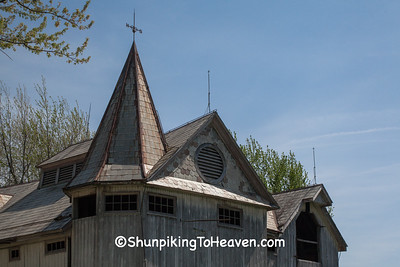 The man on the lawn tractor saw me walking toward him, so he stopped and shut off the mower. I introduced myself and he, in turn, said his name was Bill and that he was the owner of the barn. He gave me a bit of information about the barn and permission to walk around and photograph it and the other farm buildings. The lawn surrounding the buildings was huge, so I let him get back to work. As I walked around taking photos, I had to keep waiting for Bill and his tractor to move out of my frame as he crisscrossed the lawn.

Bill had told me that the roof of the barn was made of slate and that the tiled turret that rose above the various lines of the roof was the top of an interior water tower. I had seen water towers on a few farms but had never seen one that was built into a barn.

As I prepared to write this blog, I spent a couple of hours trying in vain to find out more information about this beautiful barn, but I couldn’t find much. But then, another angel landed on my shoulder and one last search turned up some detailed information written by Ohio-born artist Robert F. Kroeger, who recently visited and created a beautiful painting of this unique barn. According to Mr. Kroeger’s research, the barn was built, circa 1890, by Richard E. Jones, Gomer’s first physician. Dr. Jones had come to Gomer in 1848 at the age of 14 when his family immigrated from Wales. 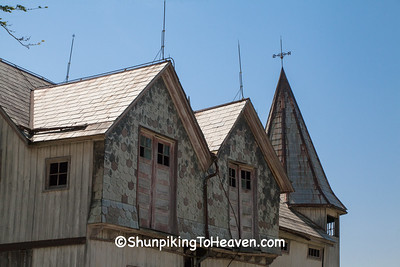 Dr. Jones had stored the grain from his crops in this barn. He also kept his horses and buggies in the barn, taking them out when he traveled or made house calls.

The three dormers of the barn were covered in expensive circular slate tiles. And one of the three, pictured below, has a large circular vent in the center of it. According to Mr. Kroeger, slate tiles often came from Wales and this allowed American barn and house owners to bring a bit of their native country to their new homes in America.

In the photography log that we use to record information about the photos we take, we had called this a Gothic barn. But I wasn’t sure if that was an accurate description of the architectural style. Before finding Mr. Kroeger’s history of the barn, I searched in one of my often-used reference books called “The Old Barn Book: A Field Guide to North American Barns & Other Farm Structures.” Imagine my surprise when I discovered a photo in this book of the building that was next to this barn, which we assumed was a granary. Mr. Kroeger’s document said this building was a granary and the doctor’s farm office. The field guide said this building was a carriage house, done in Victorian style. It was probably all these things at one time or another.

The field guide also explains that this type of cupola, with louver ventilators on all four sides, is typical for the Victorian Gothic style. 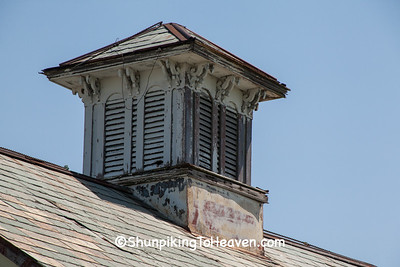 One final note about the little building next to the town hall that I mentioned at the start of this blog post: Bill said that it had been a barber shop in its heyday. He also told me that they used to make hamburgers in the back of the barber shop. You really have to talk to the locals if you want the little details that you’ll never find in books or on the internet!