A Roadside Philosopher – The Rest of the Story

In the late summer of 2011, Ruth and I stumbled upon a large blackboard by the side of the road that said, “Never Answer an Anonymous Letter.” We loved the idea of someone providing a little humor on a regular basis for the people driving past. This blackboard is quite a distance to the west of where I live (and from where we always depart on our photography trips), but we made it a point to check the blackboard whenever we were passing through the area. We first wrote about this Roadside Philosopher in March of 2012, and mentioned that we didn’t know anything about the person providing the roadside humor.

We’ve collected many more sayings from this blackboard since then, so Ruth recently wrote More from a Roadside Philosopher. And, again, she mentioned that we still didn’t know anything about this prolific writer. Recently, on the Saturday of Memorial Day weekend, we again stopped by the blackboard.

As I was photographing it, I noticed two people working outside in the area beyond the blackboard. So I walked down the driveway and told the woman (Diane) that I was hoping to meet the roadside philosopher. She smiled and pointed to her husband, Ron, saying it was him, not her. 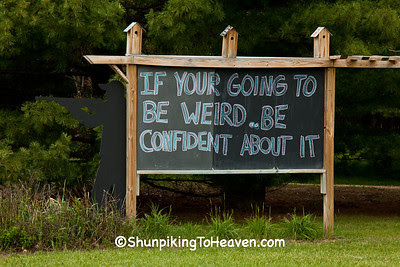 We talked for a long time and, in response to my questions, I learned that Ron’s parents used to subscribe to the Reader’s Digest when he was a kid and he always liked all the short quotes they printed. So he decided it would be fun to share humorous quotes in his own special way. His source for these humorous quotes is mainly the Internet, but he finds them other places, too.

I told Ron and Diane just how much fun that blackboard has been for us and how much we look forward to stopping by whenever our travels allow for it. They said people often stop and take pictures by the blackboard and the neighbors told them that sometimes someone even sets up a tripod. I responded, “That would be me!” I gave them my card and told them to go to our blog and search on Roadside Philosopher to see what Ruth had written about them. And now we have the rest of the story.

We headed on down the road and into the country for our usual backroads shunpiking. The first thing we deemed worthy of a photograph was a log cabin in a wonderful wooded setting. 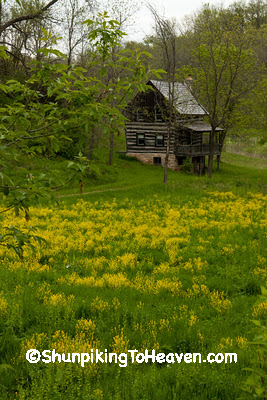 Next, we headed towards Spring Green and visited the Lloyd Jones Family Cemetery. Since it was Memorial Day weekend, I checked to see if any of the Lloyd Jones family members were veterans and I found this interesting gravestone. It says, “Enos David Lloyd Jones, Son of Ralph and Helen Lloyd Jones, Born June 5, 1920. Killed in Action Near Metz, France, Sept 13, 1944. Buried in the U.S. Cemetery, St. Avold, France.”

According to my research, 1st Lieutenant Enos David Lloyd Jones had established a soft water service company in Mason City, Iowa in 1937, where he intended to return after the end of World War II. He served in General Patton’s army in France and was killed in action, leaving a wife and 5-month-old son. According to Wikipedia, the Lorraine American Cemetery and Memorial is “Europe's largest United States’ World War II military cemetery with the graves of 10,489 American soldiers who died during World War II.”

We ended our peaceful day of photographing by capturing one of our favorite one-room schoolhouses in the lingering light of the setting sun. 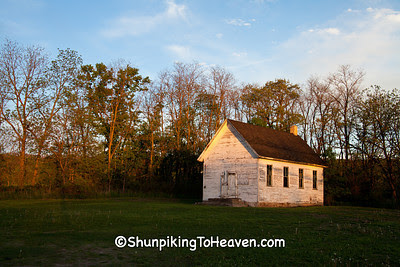 Maybe you have one in your neighborhood, or maybe you’ve driven by one. Little Free Libraries are popping up all over the United States, and in other countries of the world. 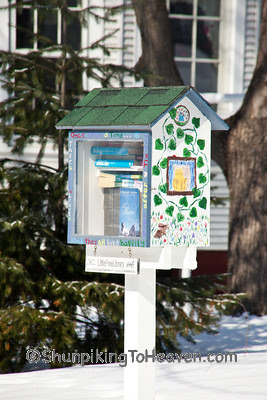 The first little free library was built by Todd Bol of Hudson, Wisconsin in 2009. He built the library in the shape of a one room school to honor his mother who had been a teacher and who loved books. He put it on a post in his front yard and filled it with books. His neighbors loved it. 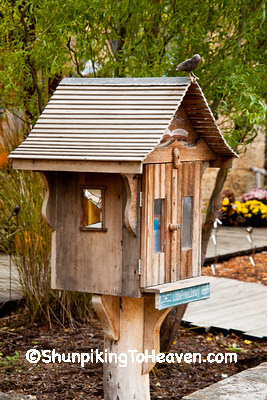 He built several more and gave them away. On each one, he put a sign that stated “free books.” And once you notice one, you start noticing them all around. At least, in Wisconsin you do. So far, I haven’t marked the locations in my research, so when we find one, we just turn around to get a picture. 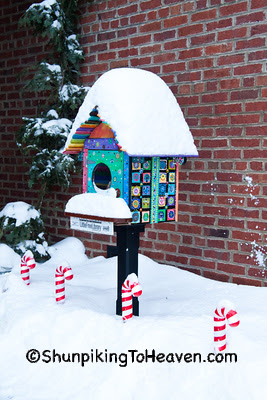 We’re looking forward to finding some in other states as we visit. It’s interesting to see the many different designs. For instance, in Baraboo, Wisconsin, home of the Circus World Museum, one of the Little Free Libraries is in the shape of a circus wagon. 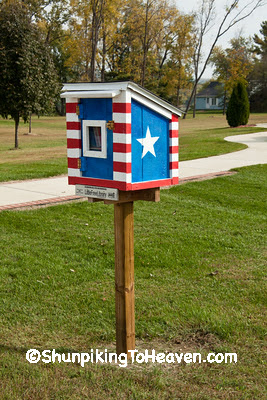 Both Joann and I love books, which for us started in the tiny library of our four-room Catholic grade school. Neither of us has taken a book or left a book at a little free library yet, but we sure get enjoyment out of seeing and photographing them.

Look around as you travel about, and you’re bound to see Little Free Libraries where you live.