Adventures on Route 66 in Illinois

The first place Joann and I ever visited on old Route 66 in Illinois was the former town of Funks Grove. I’m not even sure we knew it was on Route 66 on our first visit. Joann was visiting a friend in Bloomington, and it was a place we could go out of the city. 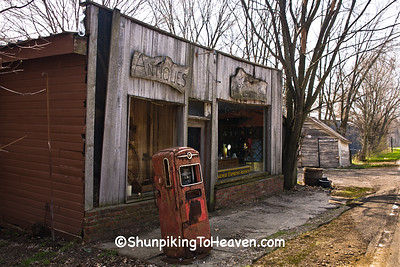 The old General Store looks a little worse for wear each time we visit, but it’s still there, just across the railroad tracks from the current old Route 66. The depot across from it has gotten some love since we first visited, but the old store sits abandoned.

The next time we visited Route 66 in Illinois was on a trip to the Ozarks in 2008. We always need places to get out of the car on long drives to other states, and I thought some of Route 66 would fit the bill. 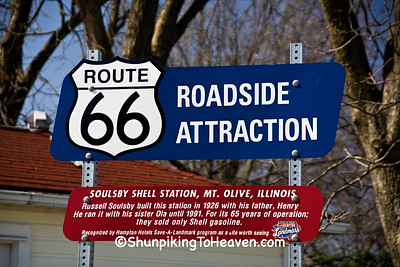 Along the route, you can find signs for many of the restored and maintained sites. This sign was at the Soulsby Shell Station in Mt. Olive, Illinois. It offers a little bit of history to the traveler. If you don’t keep notes of your pictures like we do (and honestly, who does?), the sign will help you remember where on your trip you were. 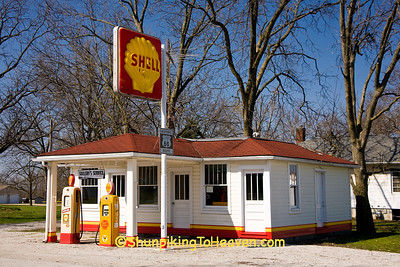 Henry Soulsby had been a miner until an injury forced him to give up that occupation. When he heard that a new highway would be passing through Mount Olive, he took his life savings and bought two lots on the corner of 1st Street and what is now Old Route 66. With the remaining money, he built his gas station in 1926 from his own design.

When Henry retired, his children Russell and Ola took over the station and ran it together.

They closed the station for good in 1993, and finally sold it to neighbor Mike Dragovich. When Russell Soulsby died in 1999, his funeral procession took him under the canopy of his gas station one last time. 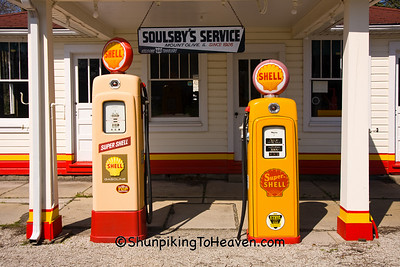 Mr. Dragovich and the Soulsby Preservation Society began preservation efforts in 2003. It was listed on the National Register of Historic Places in 2004. The vinyl siding was removed, the original doors and windows were restored, and the building was repainted. Today it looks as it did during its best days after World War II. 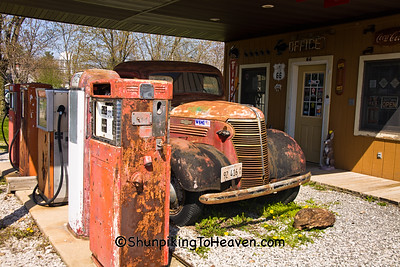 Another stop on that trip to the Ozarks was at Henry’s Rabbit Ranch in Staunton, Illinois. This one wasn’t an original gas station, but was built as a replica of a vintage canopy style gas station to serve as a visitor center. It is filled with Route 66 and trucking memorabilia. When we stopped in, what caught our eye was the Route 66 Beer (Root Beer). We bought a 6 pack to enjoy on our trip.

The canopy of the station features an old truck and rusty old gas pumps. Around the building you can find old Volkswagon Rabbits and even pens of live rabbits. Old signs hang on the building and dot the grounds, including old motel signs, like the one below. 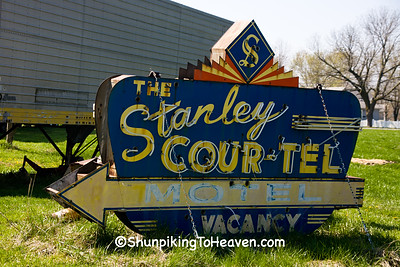 After this stop, we checked the time and knew we had to get going. We had a long ways to go to get to the Ozarks, so we got on the Interstate for the rest of our trip through Illinois.

The next time we made a stop on Route 66 in Illinois was in 2013 on our way to Ohio. I sort of over-planned the “to” route for that trip, but one of the stops was the town of Dwight, Illinois.

It sits on Old Route 66 and the best stop is Ambler’s Texaco Gas Station. Basil “Tubby” Ambler operated the station from 1938 to 1966. The original building was built in 1933 by Jack Shore with an office and a canopy extending out over the gas pumps. 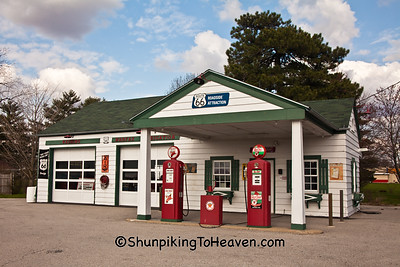 Mr. Ambler added the service bays, and ran the station until 1966. The station continued on selling gas until 1999; a total of 66 years. Then it was an auto repair shop until 2002 when it was closed and donated by owner Phillip Becker to the Village of Dwight. 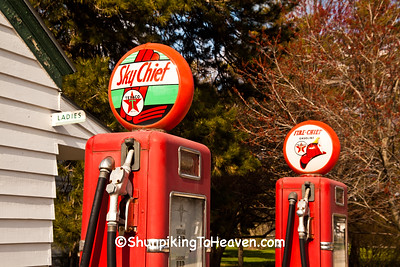 The Village restored the station to its former glory and today it serves as their visitor center.

Dwight also has a replica Shell Service Station with a red Ferrari painted on the front. It was formerly a Buick car dealership as well as several other businesses. 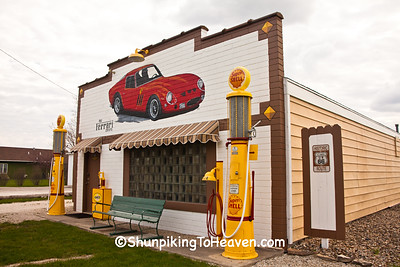 After this stop, we did manage to follow my plan and make it far enough into Indiana to be close to our first light stop the next morning. And needless to say, Joann asked me to not be quite so ambitious for first days on future trips.

We so appreciate the people who enjoy the nostalgic gas station memorabilia and restore them for display for others enjoyment.

We’ll have more Illinois Route 66 as well as Missouri Route 66 in future blogs. If you get the chance, get out there and have your own experiences on the Mother Road. In just the last week, two businesses along the route have been damaged by fire, and you never know which will be rebuilt and which will be gone forever.

On Sunday, a little before 5:00 a.m., Ruth arrived at my house so we could head out for a day of fall photography in Juneau and Monroe Counties. Ruth pulled her car into the garage, opened the kitchen door, and said, “Just so you know, it’s froggy out this morning,” which is what we jokingly say when it’s foggy out. Then she asked me if I could fill her water bottle. I filled the bottle and took it out to the car.

Needless to say, it startled me when the “leaf” came alive unexpectedly. Now all I had to figure out was how to catch the tiny frog so I could take him back outside. This proved to be a bit of a challenge. 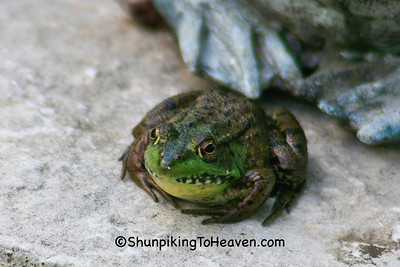 Every time I approached the frog and started to reach for him, he “boinged” halfway across the kitchen floor. And I had to keep chasing him back towards the sink so he wouldn’t go under the refrigerator or stove.

Meanwhile, the clock was ticking and it was already past the time we had planned to leave. So I grabbed a paper towel and lunged at him, successfully trapping him in the paper towel.

I took the little brown frog outside and let him go. I wish I could have gotten a picture of the frog, but he was too jumpy for me to do that. And I wish I knew what kind of frog it was. I was pretty sure it wasn’t a tree frog, which I often see and hear around my house. And I knew for sure it wasn’t a bullfrog! (Grin) 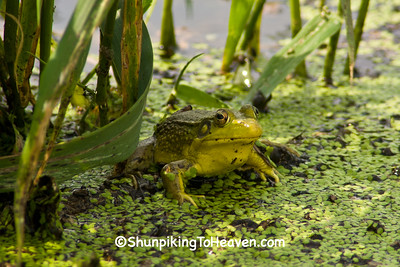 When we had finished loading the car, I went outside to make sure my little guest wasn’t sitting in the driveway behind my car. And then I heard something I’ve never heard outside my house in the thirteen years I’ve been here….a Spring Peeper. I didn’t know Spring Peepers sang in the fall, but I heard several again today. And then I read that they sometimes sing in the fall, especially when it’s warmer than normal, which it certainly was yesterday and today.

As we drove out into the country, I commented that it was indeed "froggy" that day, inside and out! I hope everyone is enjoying autumn. Just watch out for leaves that go “boing!”

Let me start this blog post with an apology. We try to release a new post about every 7-10 days, with two weeks as the maximum amount of time between posts. It’s now been three weeks since my last story about the Little White Church on the Hill. I had hoped to get something posted before leaving on a trip to Michigan’s Upper Peninsula, but trip preparations and dealing with hail damage totally consumed me. 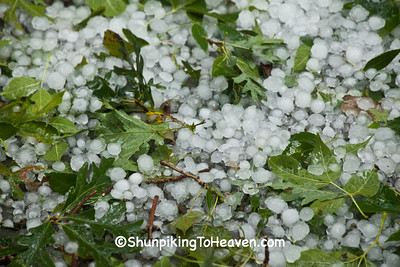 It’s been an unusual fall season so far in Wisconsin – unusually warm temperatures and an unusual amount of rainfall (not to mention the hailstorm that damaged so many homes and cars throughout Wisconsin). 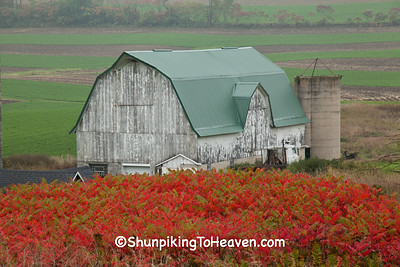 
The days since the official start of autumn have seemed more like the end of summer than the start of fall. Tomorrow, however, the first autumn-like day has been forecast, with a high temperature of 59 degrees, followed by morning temperatures in the 30’s. 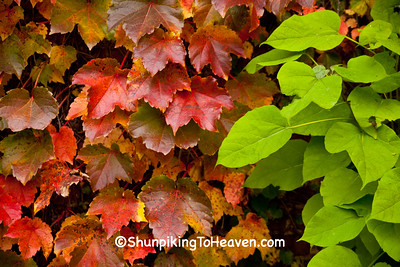 Ruth and I always wait (impatiently I might add) for the all-too-short fall season to begin so that we can capture some of our typical rural scenes with the added benefit of fall color.

And now that our Michigan trip is complete, we are taking some day trips along the colorful backroads of Wisconsin. In the near future, we will have photos to share and stories to tell about our adventures in Michigan’s Upper Peninsula. 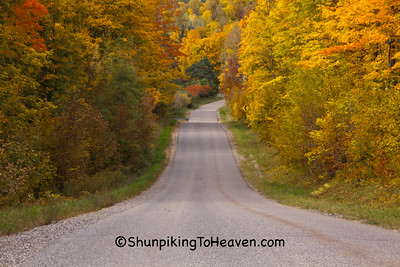 Until then, be sure to get outside to enjoy autumn in all its glory.