I’ve always loved pictures of old ghost towns, which are usually found in the western states. In Wisconsin, many towns were eventually abandoned, often due to the railroad bypassing the town. And, in most cases, none of the buildings exist anymore. So, in 2012, on a visit to northwest Wisconsin, I was really excited when Ruth told me we would be visiting a ghost town. 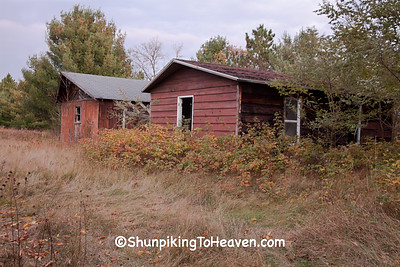 As Ruth began directing us toward the ghost town, the following conversation took place.

Joann: What’s the name of this ghost town? 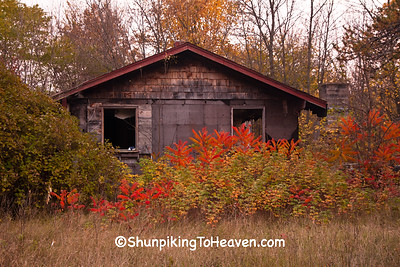 There isn’t much information to be found about the unincorporated town of Imalone, other than a 2007 Milwaukee Journal Sentinel article written about Heather Aldrich whose grandparents had owned the Wagon Wheel bar in Imalone. The article was about a road trip Heather took with a friend to prove that there really is a town in Wisconsin named Imalone. In the 1970s, Heather had attended summer bible camp in Imalone. 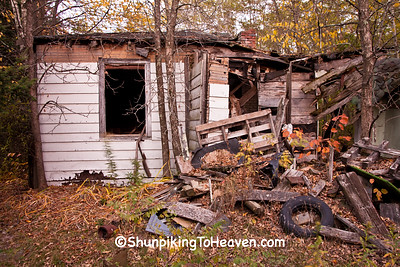 So, where did the name Imalone come from? Legend has it that the town was established by a man named Snowball Anderson, who built a gas station in the area. One day when Snowball left his gas station in the hands of an old-timer named Bill Granger, a salesman who was writing up an invoice asked for the name of the town. 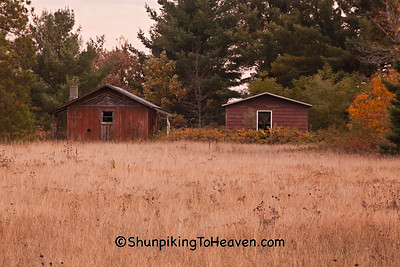 Not knowing there was an official name and having no one else there to ask, Bill said, “I’m alone.” So the salesman wrote Imalone on the invoice and it stuck.

Others say the legend isn’t true and it was actually Snowball Anderson who named it Imalone because he and his gas station were alone there at the time. 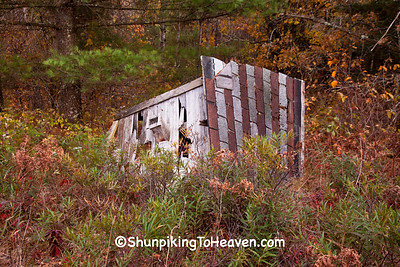 It was late in the day and the sun was sinking toward the horizon when we pulled off the county road onto a circular dirt road with the abandoned town in the distance. I wasn’t sure what to expect, but I grabbed my equipment and made my way through the tall grass to the first abandoned building I came upon. All that was left of it was a concrete block foundation and a couple of living room chairs.

As I looked through an open window frame of another deteriorating home, I could see the remains of a very old television set, with a shattered picture tube.

Just beyond the abandoned houses were the remains of an old concrete stave silo. So there must have been a farm there at one point. 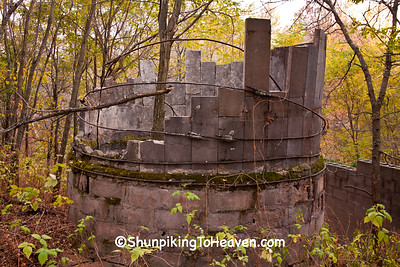 And an old stone well sat alone and forgotten in the woods behind the collapsing houses.

Imalone’s only other claim to fame was having its name on a 30- by 70-foot billboard about 10 years ago above a 20-story building in Midtown Manhattan. The billboard simply said, “Imalone WI, 934 Miles,” with an arrow pointing to the west. 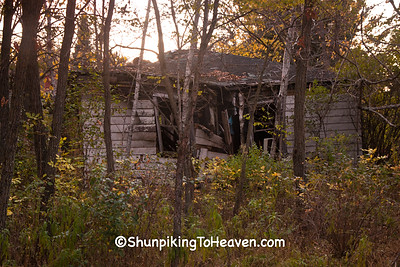 According to the 2007 Milwaukee Journal Sentinel article about Imalone, written by Jim Stingl, the billboard company had a gap between paid ads on that billboard, so they decided to get creative. A sales assistant suggested a mileage sign, so the VP of creative development looked for towns with strange names and decided to use Imalone. 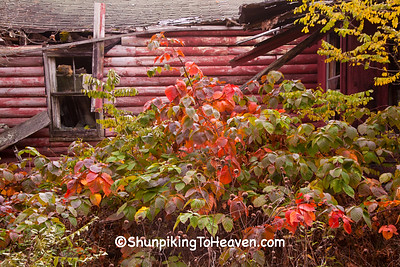 Walking through the remains of what once was a town was both sad and a little spooky. But now I can say that I visited a real Wisconsin ghost town.