A Mystery - Footings in the Woods

In the fall of 2010, Joann and I were in Monroe County near cranberry country (Warrens and Tomah). We came to a corner with a brick town hall and an old outhouse near the woods next to it. 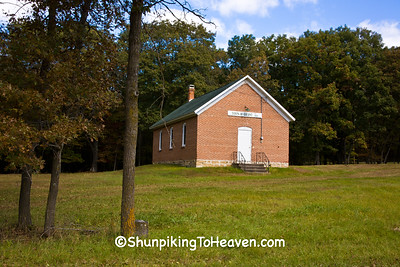 Following our normal process, Joann got out and got her equipment, and walked off to take photos of the town hall and the outhouse, while I started to look at the gazetteer to plan where we might head next.

After photographing the town hall and all around the outhouse, Joann came back to the car and said “You have to see what’s in the woods.”

I got out of the car and we walked back across the road and up into the woods. There among the grown trees and understory was a very large stone foundation with big concrete footings. We talked about what a building of that size might have been. Our first thought, because of the size, was some sort of mill, but we knew that was just a guess. 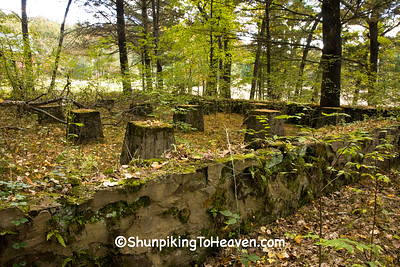 Joann decided it was too interesting not to take some photos, so she set up her equipment and I went back to the car to finish my plan. 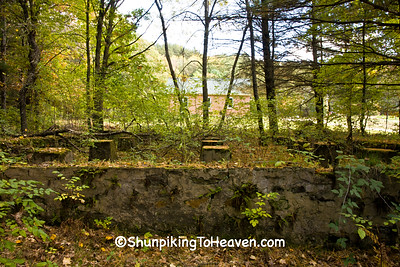 As is often the case, we forgot about the photos until Joann was processing other photos and stumbled on them. She wondered again what the building might have been and decided to contact the Monroe County Historical Society to see if they might know what had stood at that location.

They knew about the town hall and that it had begun its life as a school. When the town was organized, a new school was constructed across the highway and the brick school became their town hall. At some point, the new clapboard school had been moved, so what remained was the Grant Town Hall and its outhouse.

They didn’t know what the building in the woods was, but they did provide an old map with some building codes on it. Where the town hall stands was the code of TH, and next to it was a code of DH.

Joann guessed Dance Hall but we couldn’t get a confirmation. What we got was the complete map with codes at the bottom, but DH wasn’t among them. Now we were really curious about how to confirm what that building had been. 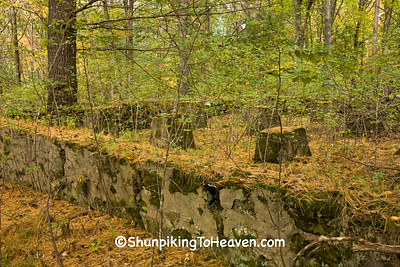 Then we found the email address for the Town of Grant which still meets at the Town Hall. Joann sent off an email with a link to the photos we had taken in the woods. We were hoping someone in the township might know someone old enough to remember or have heard about what building used to stand at that location.

We didn’t hear back from them, but we did get another email from the Monroe County Historical Society saying they could confirm that the DH stood for Dance Hall and that they had recently been contacted about the Grant Dance Hall.

We don’t know if it was our email to the Grant township that brought up the discussion of the old dance hall or not, but we’re happy to know the answer to our question about what that old building was in the woods. 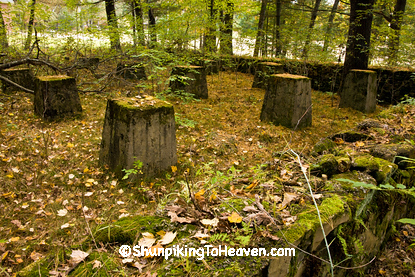 And it makes us sad that it was gone before we could add the building to our collection as a Dance Hall. Our father had taken us past an abandoned Dance Hall he used to frequent as a young unmarried man, and our mother and father took up polka dancing when we lived in Lake Mills. So it’s nice to visit some of the places where they might have danced if they were near them.

We have more mysteries from our years of travel, and maybe, as time permits, we might find out what some of those old buildings were. After all, we found them important or intriguing enough to photograph for our collection.

We never know what we’ll find along the backroads, but we do love a good mystery.

Posted by Shunpiker at 9:37 PM