I'm Dreaming of a White Christmas

I’ve always been a fan of snow, especially for Christmas. But this year, although November temperatures felt like January, we haven’t had any measurable snow in the month of December. And, as I begin the writing of this blog post, my home is surrounded in dense fog. Instead of looking out my window at the snow-covered woods, I am dreaming of a white Christmas, like the ones I remember as a child. 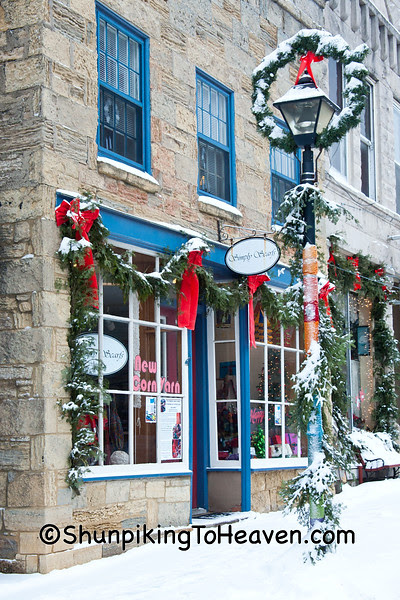 Last winter, due to the polar vortex that besieged much of the country, Ruth and I ventured out only twice to photograph. And because our family gathers on days other than Christmas Day, we had the opportunity on Christmas afternoon to capture some holiday scenes. 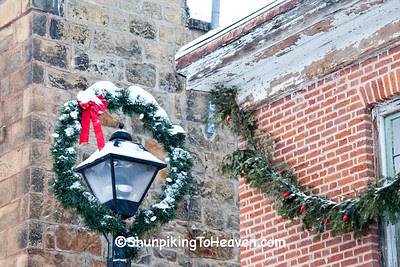 We decided to visit Mineral Point, Wisconsin’s third oldest city, with a population of about 2,500. Mineral Point has some of the most beautiful 19th century architecture and is a town filled with artists' studios. We figured we might find some great Christmas scenes there and our hunch was correct. 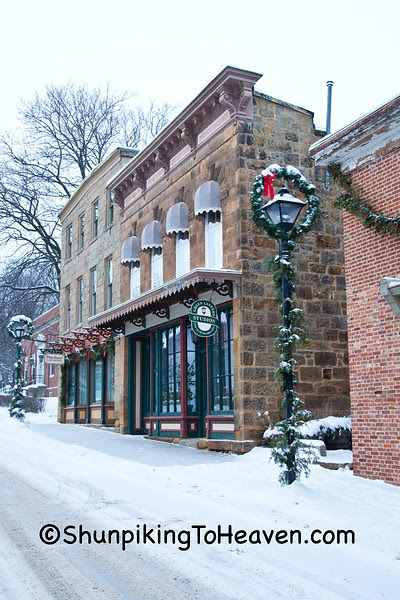 Mineral Point is about an hour to the southeast of where I live and we left home around mid-afternoon, thinking that would give us enough time to capture some snow scenes and Christmas scenes prior to dusk when the Christmas lights would come on. 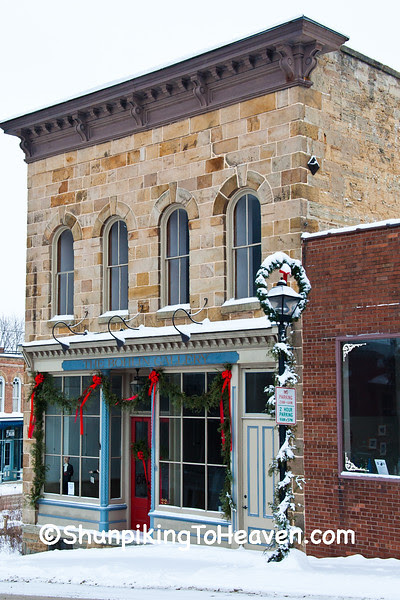 However, about 20 minutes from home, it began to snow heavily and we debated if we should continue our trip because the roads were getting a little slippery. The snow seemed intermittent so, being the diehards that we are, we decided to keep going. 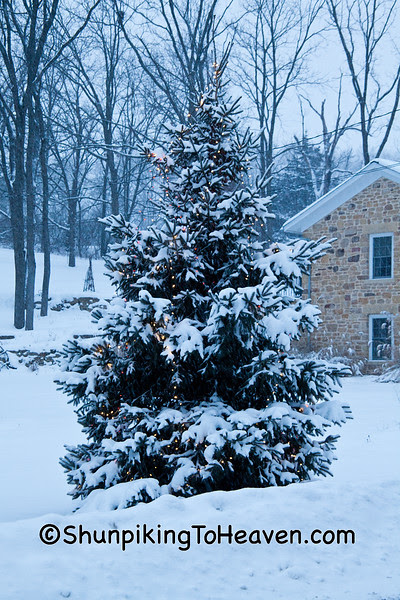 Due to the slower driving speed in the snow, we reached Mineral Point with a limited amount of time to photograph before dusk, so we worked quickly. First we visited High Street and captured some of the daylight scenes you saw above. Then we visited the First Methodist Church and I trudged through the snowbanks to capture the church doors as the snow continued to lightly fall. 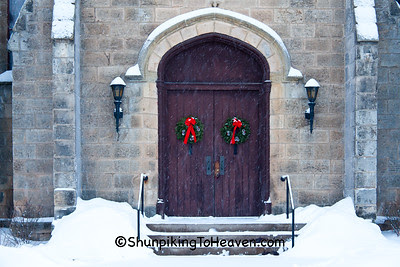 Then there was just enough time to drive down Shake Rag Street, where Cornish immigrants settled in the 1830s. I hurried to capture a few scenes before we needed to head back to High Street for the 20 minutes or so of perfect lighting for the Christmas lights. 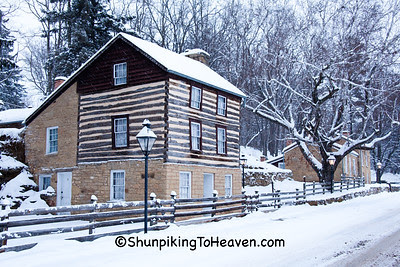 The scenes were beautiful but the snow began to fall more heavily and the snowflakes were huge and very wet. So it was a challenge to keep my camera lens clean as I captured the scenes. After a few minutes, I was covered in wet snow, but I had what I needed and we headed back downtown. 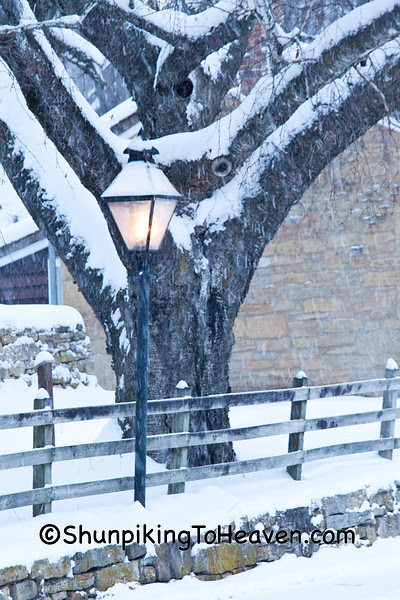 As dusk began to fall, we parked the car on Commerce Street to capture a row of stores all decked out for the holidays. There was garland around the windows and lamp posts, and there were wreaths on the street lamps. I set up my tripod and got my camera ready and waited for the lights to come on….and waited…..and waited.

“Oh, oh,” I said to myself, “I’ll bet they have the lights set to come on at 5:00 pm, which will be too late to get the perfect lighting.” Finally, I picked up my camera equipment and headed back to the car to talk to Ruth. Just as I began to tell her that we might be out of luck, the whole town lit up. Now there was no time to spare. So I quickly went back to my original position and started snapping. 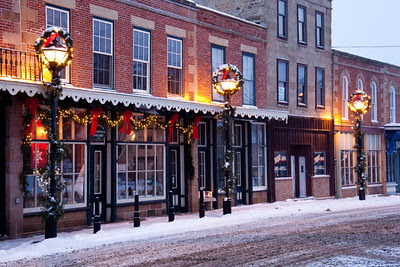 Then we headed up High Street to recapture some of the scenes I had captured earlier, now lit up with Christmas lights. The snow continued and the wind began to blow, which made it even more difficult to keep my camera lens free from splotches of wet snow. 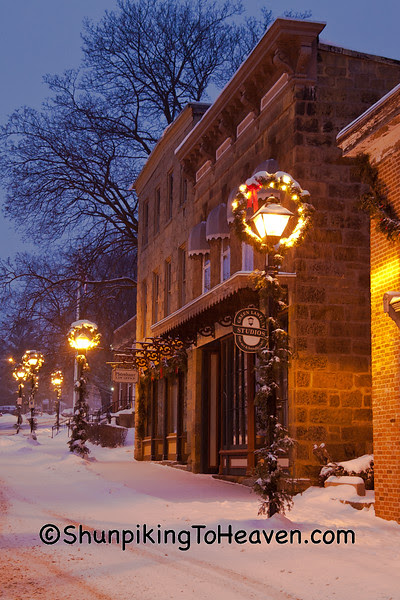 As darkness began to descend on the town, I worked to capture the last Christmas scenes before it was too dark. 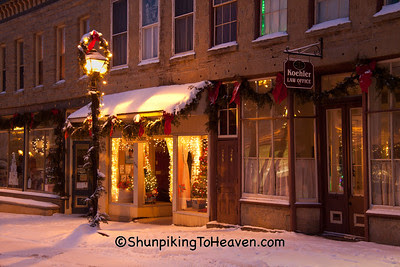 The last thing I really wanted to capture was a long street scene, but there was a car parked in the way….the only car on that side of the street at that time. I said, maybe even out loud, “I sure wish someone would move that car.” A few seconds later, a man came out of one of the doors, hopped in the car, and drove off. Ask and you shall receive. 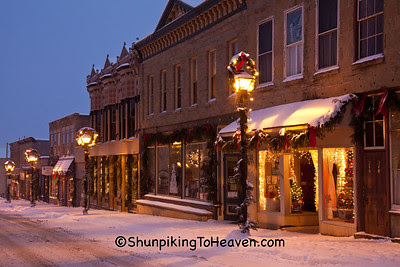 As I wrap up this blog post, I am listening to some instrumental Christmas music, drinking a cup of hot cocoa, savoring a gluten-free cutout cookie my sisters lovingly baked and beautifully decorated for me, and dreaming of a white Christmas. 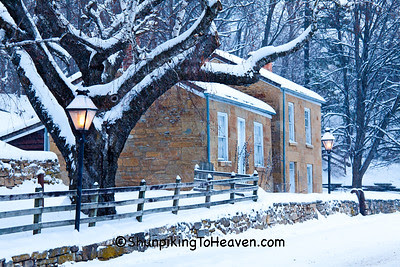 May your holiday season be a blessed one shared with family and friends and may you remember the true meaning of Christmas.

On December 14, 2013, Joann and I visited Forest Hill Cemetery on a mission. Earlier in the day, wreaths had been placed on many of the veterans’ graves during the national Wreaths Across America ceremony. 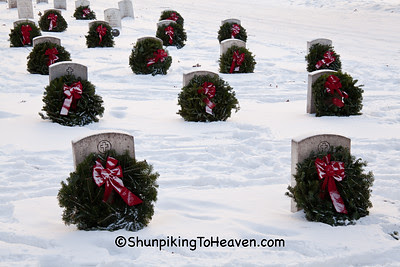 It all started with one man, Morrill Worcester, who owns the Worcester Wreath Company in Harrington, Maine. He had won a trip to Washington D.C. when he was 12, and one of the places he visited on that trip was Arlington National Cemetery. It made such an impression on him that, in 1992, when he found himself with excess wreaths towards the end of the Christmas season, he arranged to have them placed on the graves of veterans in one of the oldest sections of graves at Arlington. 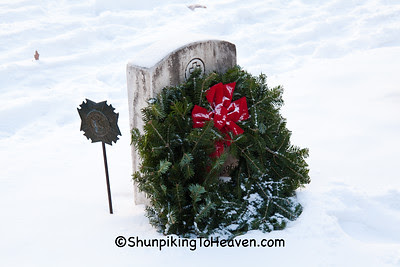 A trucking company volunteered to transport the wreaths all the way to Arlington and members of the local American Legion and VFW Posts gathered to decorate the wreaths with traditional red, hand-tied bows. The wreaths were laid at the graves by members of the Maine State Society of Washington D.C. That first wreath laying included a special ceremony at the Tomb of the Unknown Soldier. 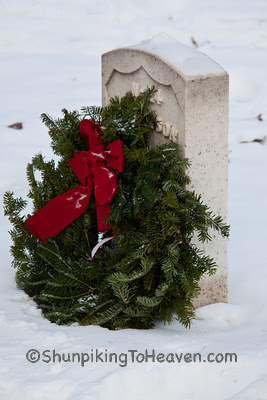 The annual wreath laying went on quietly until 2005 when a photographer posted a photo to the Internet of rows of graves adorned with wreaths at Arlington National Cemetery. The photograph generated national interest, and thousands of requests came from all over the country. People wanted to help at Arlington, or to start the same wreath laying at their own State and National Veterans cemeteries. 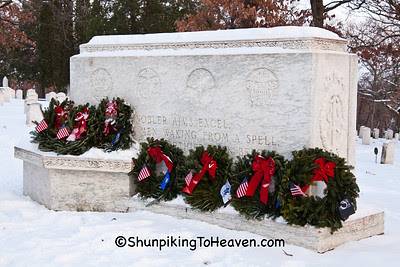 It was not possible for Worcester to donate thousands of wreaths to each state, so he began sending seven wreaths to every state, one for each branch of the military and for POW/MIAs. In 2006, the Civil Air Patrol and other civic organizations helped to coordinate the simultaneous laying of wreaths at over 150 locations around the country. That year, the Patriot Guard Riders volunteered to escort the wreaths to Arlington. That began the annual “Veterans Honor Parade” that travels the east coast from Maine to Virginia in early December. 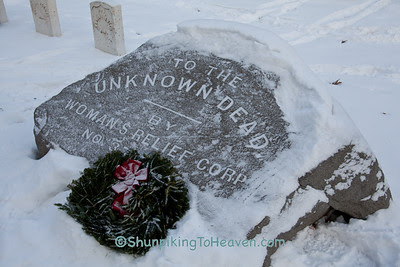 By this time, it was apparent that there was more interest in remembering and honoring our country’s veterans than just Arlington, and it was bigger than this one company could take on. 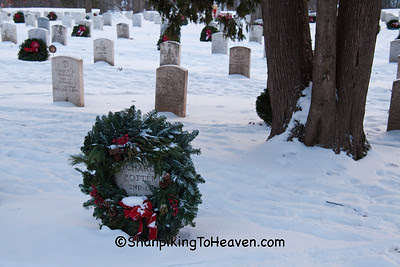 In 2007, the Worcester family, veterans groups, and other individuals who had helped with the annual Christmas wreath ceremony at Arlington formed Wreaths Across America. The mission is simply “Remember. Honor. Teach.” 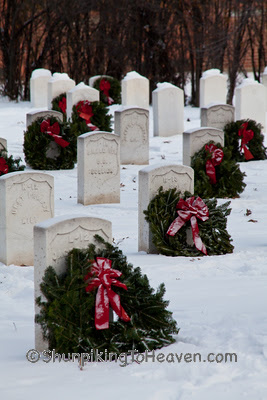 In 2008, the wreath laying ceremonies had expanded to over 300 locations in every state, Puerto Rico, and 24 overseas cemeteries. Over 100,000 wreaths were laid, and over 60,000 volunteers participated. That year, December 13, 2008 was unanimously voted by the US Congress as “Wreaths Across America Day.” 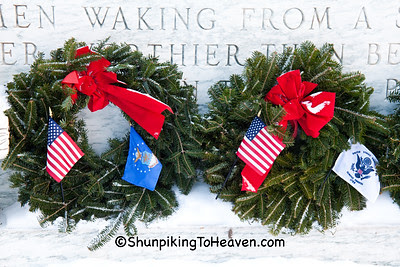 By 2010, the number of wreaths had grown to over 220,000, and the number of locations had grown to 545, including the Pearl Harbor Memorial, Bunker Hill, Valley Forge, and the sites of the September 11 tragedies. It was accomplished by 902 fundraising groups, corporate contributions, donations of trucking and shipping, and the help of thousands of volunteers. 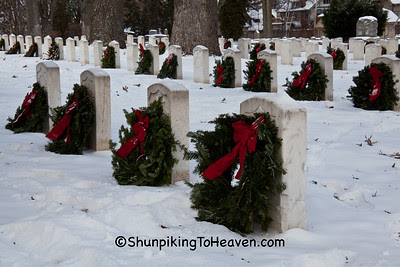 The wreath laying is still held annually on the second or third Saturday in December. The goal for most of the cemeteries is to lay a wreath at each gravestone, but they need more donations to make that happen. 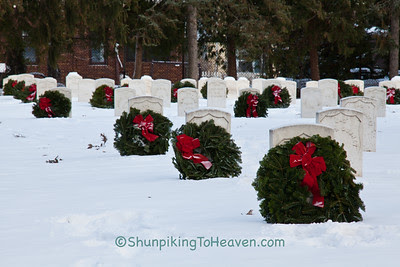 If you are near a National cemetery or a cemetery with a Soldiers’ Lot, stop in and pay your respects at the veterans’ graves. You won’t soon forget the sight of the rows and rows of identical gravestones, and the wreaths laying at many.

A Salute to Miners Everywhere

December 6 is National Miner’s Day. It is a day to celebrate miners and remember those who lost their lives in mining activities in our country. We don’t often stop to think about where all of our creature comforts and electronic gadgets come from, but most of it would not exist if it weren’t for miners across the country. In the middle of the small unincorporated town of Baxter, Kentucky stands a coal miners monument. The monument was constructed in the 1950s out of coal taken from thirty different coal mines that were operating at that time. 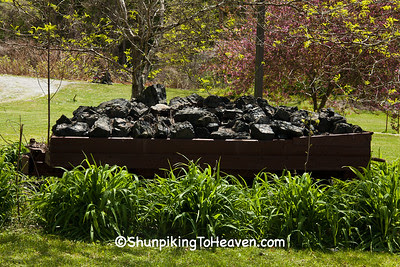 It is fitting that December 6 is Miners Day, as it is the anniversary of the worst industrial accident in our nation’s history. It was the Monongah Disaster which occurred in the Fairmont Coal Company’s No. 6 and No. 8 mines near Monongah, West Virginia on December 6, 1907. In that single disaster, 367 miners were lost.

West Virginia led the push for National Miner’s day and the resolution was passed on December 3, 2009.