In early May of this year, Bucky on Parade, a free public art event a dozen years in the making, was unveiled in the Madison, Wisconsin area. The project featured 85 statues of Bucky Badger, the official mascot of the University of Wisconsin–Madison. The statue below of Bucky in his football uniform was designed by FAST Corporation, the company from Sparta, Wisconsin that produced the statues. 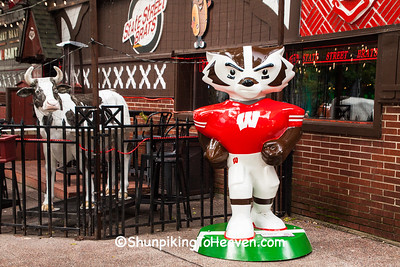 The statues would be on display from May 7 through September 12. Most of them would be in downtown Madison, but several would also be located in surrounding communities. A day or two after the event began, I stopped at the Middleton library and was surprised to see “Bucky the Builder," designed by artist Erica Vetrovec, standing next to City Hall. I didn’t know Middleton would be lucky enough to host one of the statues. And a couple weeks later, I realized Middleton was hosting two of them when I discovered “Work Safe Bucky” in Lakeview Park.

On May 10, I spent several hours photographing the beautiful spring blossoms at Longenecker Gardens in the UW Arboretum. After that, I visited Olbrich Botanical Gardens, where I discovered a Bucky statue called “Grow.” As I was snapping a photograph, a woman told me to make sure I saw the one across the street at Olbrich Park. I’m glad she pointed it out because it was a fun one – “Hip Buckster,” designed by artists Brooke Weiland & Evan Schultz, with his 1970s tie-dye shirt and rainbow-colored peace symbol.

As spring turned into summer, I kept meaning to visit all the Bucky statues in downtown Madison. Even with the constant reminder by friends and family who were posting their Bucky photos on Facebook, I didn’t get around to going to see them myself. As summer was coming to an end and the kids were heading back to school, I realized there were only a few days left before many of the Bucky statues would be removed and auctioned off. This is “Baller Bucky,” by artist Brooke Wentland, suited up for a basketball game and standing in front of the University of Wisconsin’s Red Gym. 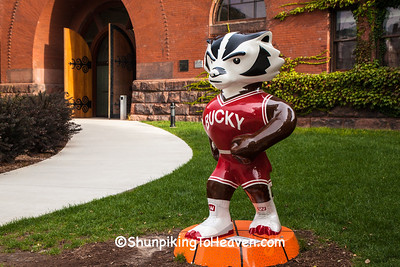 The upcoming weekend would be crowded downtown due to a Badger football game on Saturday and an Ironman competition on Sunday, so I decided I needed to go on Friday and visit as many Bucky statues as possible. However, that meant fighting weekday traffic and parking problems, along with all the university students walking and riding to classes. So I headed out before dawn and started with one of my favorites, “Major Bucky,” which was designed by artist Rachel Lyga, and honors the drum major and leader of the UW marching band.

Parking near these statues was difficult, so after capturing the first three statues, I parked in the Lake Street ramp and began the long route on foot. First, I captured “#GameDayBucky” by artists Rose Malm and Austin Fath, with his Jump Around shirt. October 10 of this year marks the 20th anniversary of the first time "Jump Around" by the House of Pain was played between the third and fourth quarters. For anyone who doesn’t know what this fun tradition looks like, here’s a short Jump Around YouTube video.

I walked across Library Mall and hiked up Bascom Hill to capture another favorite, “Graduation Bucky,” designed by FAST Corporation. Next I walked down to the Memorial Union Terrace and captured “Sunset” Bucky, by artists Allyson Casey and Megan Breene, which has all the colors of a Lake Mendota sunset. Then I walked several blocks of State Street, capturing numerous Bucky statues, including “Bucky at the Terrace,” by artist Nicole Rosenbaum. Both of these Bucky statues feature the iconic sunburst Terrace chairs.

I walked back past the Lake Street ramp and over to the Gordon Dining and Event Center to capture “Pucky” Bucky by artist Dan Gardiner. Pucky is wearing his hockey uniform and ice skates and is holding his hockey stick, ready for a game. I walked from there to the Kohl Center to capture “And On Wisconsin,” a Bucky statue designed by artist Jill Iwanski and representing past, present, and future members of the UW Marching Band.

Whew! I didn’t track my steps but should have. By this time, I must have walked at least 3 or 4 miles. I returned to my car and drove from that parking ramp to another ramp near the Capitol Square where there were quite a few more statues. One very creative statue was “Animals Need Bucky Too” by artist Kathy King. This Bucky statue had collages of pets, farm animals, and zoo animals on the front and back. 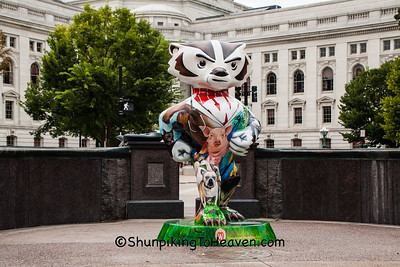 Another favorite of mine (maybe because I grew up on a Holstein dairy farm) was “Wisconsin Colors,” located outside the State Capitol and designed by artist S. V. Medaris. This Bucky statue is colored in black and white like a Holstein and he sports a sweater with Holsteins in a pasture, honoring the beauty of Wisconsin’s Driftless Area. 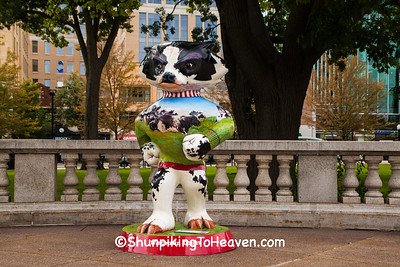 There were many more Bucky statues around the Capitol Square and along adjoining streets. I certainly had no plans to capture all 85 statues, but I worked hard to visit almost all of the ones that I felt were the most creative. I enjoyed my adventure and met some really nice people along the route. But after walking a couple more miles, I was ready to head for home. The last Bucky statue I captured was the beautiful “Celestial Bucky,” designed by artist Christy Grace and standing high on Observatory Drive at the Lake Mendota overlook. 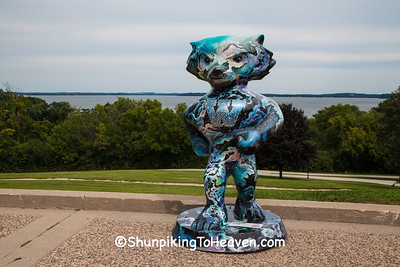 There will be a Bucky on Parade Finale Party at the Kohl Center in Madison on September 29. Thirty of the Bucky statues will be on display and up for auction. Proceeds from the event will benefit Garding Against Cancer, the Madison Area Sports Commission, and other community charities. For more information, visit the “Bucky on Parade” website.

And for photos of Bucky statues not featured in this blog post, visit our Bucky on Parade photo gallery.

An Anything But Ordinary Tuesday

Just like the day President Kennedy was shot, if you were old enough to have clear memories, you remember where you were.

September 11, 2001 started like an ordinary Tuesday. I was at work by 7:00 A.M. It wasn’t until coworkers who started at 8:00 began to arrive that I knew something was wrong. Those who had their radios on had heard that a plane had hit the North Tower of the World Trade Center in New York City. The terrible news was continuous throughout the day and for many days after. 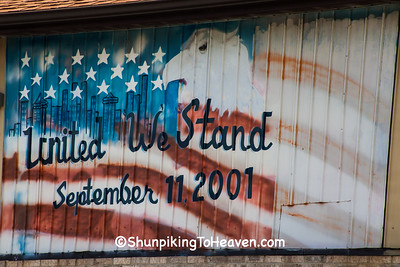 Joann and I have never really talked about that day. We have an agreement that even if we speak about something unpleasant, we’re only allowed a minute or two to kvetch and then we turn our attention to the backroads.

It wasn’t until 2016 that we stumbled on a memorial in Ohio dedicated to 9-11 and including a piece of twisted steel from the Word Trade Center site.

The program of giving 9-11 artifacts to communities began in 2010, after New York City claimed thousands of artifacts. The artifacts were free. They had to be used for a public display and the application had to describe the display so that they could match an artifact to the project. Some pieces of steel were so large that they were cut into smaller pieces, some as small as 6 inches. 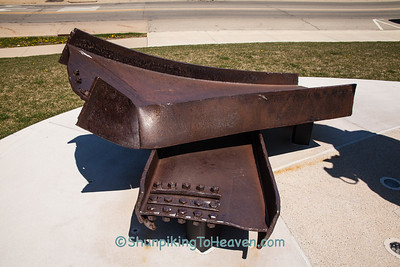 The program gave more than 2600 artifacts to 1,585 fire and police departments, schools, museums and other non-profit organizations in every state and 10 other countries. The artifacts were stored at JFK International Airport's Hangar 17. The last artifact left the hangar in the summer of 2016. 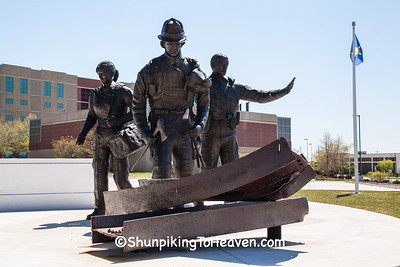 After finding our first memorial, I started to research before our trips to make sure we weren’t missing any in our travels.

On the first day of our 2017 trip to Ohio, we visited Rockford, Illinois and their First Responders and 9/11 Memorial. 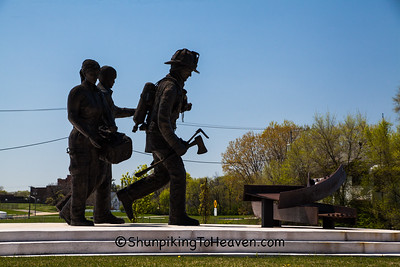 And just last fall, at the end of September, we made our way to Soldiers Walk Veterans Memorial Park in Arcadia, Wisconsin.

This park had also been on my list to visit for several years. It is 54 acres, and the largest Memorial Park in the United States, outside of Washington D.C. 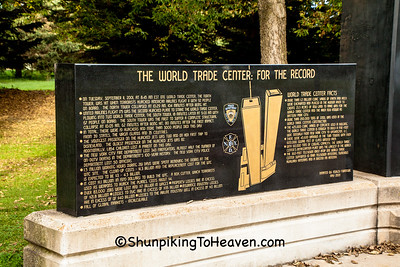 The park is about 40 minutes north of La Crosse and is free to visit. You can visit their website to find out more. 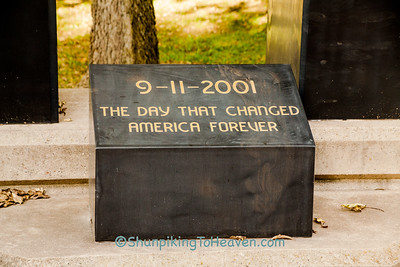 Whatever you do today, take a few minutes to remember those who perished that day, and those who have died since from illnesses related to their work at the site. 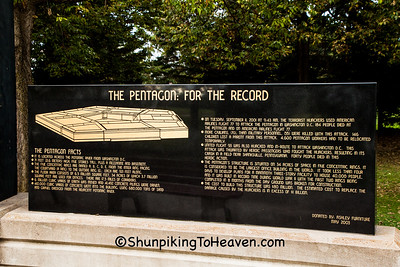 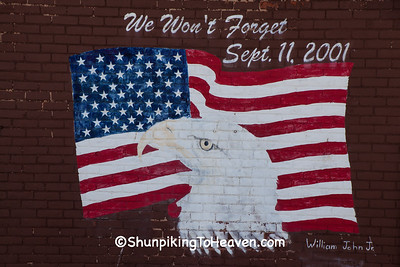 We will never forget,
Ruth