Last September, on a beautiful autumn day, Ruth and I kicked off our annual fall photography with some exploring in Adams County, Wisconsin. One of the things we had on our list was the gravestone of a Native American baby on the shore of Petenwell Lake.

Ruth had stumbled on this unique gravestone in her research, so we just had to go check it out, but we didn’t know anything about it at the time. The gravestone sits inside a wrought iron fence and says simply “Indian Baby 1854.” After some additional research, I was thrilled to find a bit of history in the book entitled, “Weird Wisconsin: Your Travel Guide to Wisconsin’s Local Legends and Best Kept Secrets,” by Linda S. Godfrey and Richard D. Hendricks. According to the book, the original marker was wooden, but it was replaced by a stone marker after the original one was destroyed by vandals.

To add some historical context to this story, I studied the chronology of Adams County, which added meaning to this sad tale. In 1837, seventeen years before the death of this baby, the first non-Indian child was born on Fourteen Mile Creek in what would become Adams County. In that same year, the Wisconsin Ho-Chunk tribe was coerced into signing a treaty by which they gave up all their remaining land in Wisconsin.

From 1840 to 1844, federal troops attempted to force the Ho Chunk people out of central Wisconsin and onto reservations in Iowa. And in 1848, the Menominee Indians relinquished their rights to land in east central Wisconsin, including Adams County, which had been created that year by the Wisconsin Territorial Legislature.

Meanwhile, white settlers continued to arrive in Adams County. In 1850, the population (on both sides of the Wisconsin River) was 187 and the first post office was established at the Marsh House tavern, which had opened five years earlier. By 1852, all of Adams County had been surveyed and the land was ready for sale.

Now, back to the story of this little Indian baby which, according to the book “Weird Wisconsin,” comes from a pioneer woman named Emily Winters St. Clair. In 1854, she and her family traveled from Pennsylvania to settle in Wisconsin. As they made this difficult journey, their infant daughter died, so they buried her in Petenwell Lake as they crossed it to continue their journey to their new home.

Upon reaching the shore, Emily and her family heard the mournful cries of a grieving mother coming from a Native American campsite near the lakeshore. What they discovered was an Indian mother who had just lost an infant son. They decided to delay their travels to attend the burial of this little Indian baby.

Over the next six years, settlers continued to pour into Adams County. They built mills and schools, opened businesses, and created towns with post offices and courthouses. By 1860, the population of Adams County had increased to 6,492 (which is an increase of over 3,000% in just ten years). I have to assume that the Native American mother of this little baby boy was forced, along with her tribe, to leave central Wisconsin.

And what about the St. Clair family? Well, they settled in the area and Emily faithfully tended to the grave in honor of both the Native American boy and her little girl who both rest forever at Petenwell Lake.

In the spring of 2017, Joann and I were on our way to photograph in East Liverpool, Ohio, but first I had a little detour for us into Chester, West Virginia, just across the Ohio River. 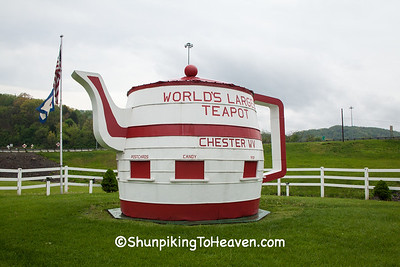 You have to get off the new Highway 30 onto Old Highway 30 (The Lincoln Highway) to see the teapot. It started as a big barrel advertising Hire’s Root Beer in Pennsylvania. In 1938, William “Babe” Devon purchased the big barrel and had it shipped to Chester. It was covered in tin to form a teapot shape, along with adding a spout, a handle, and a large glass ball to make the knob of the “lid.”

The Teapot stood in front of Devon's pottery outlet store. Local teenagers were hired to run a concession and souvenir stand which was set up inside the Teapot.

During World War II, the teapot was closed for two years. It reopened in 1947 with new owners and food was sold again until the late 1960’s. 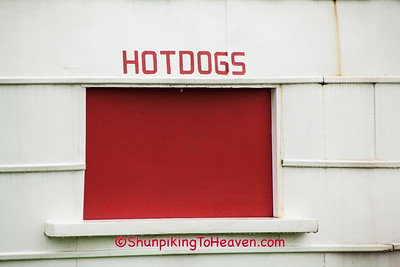 For a time, the teapot was painted blue and white and sold other items including lawn and garden items, china, and novelty items. When the business closed, the teapot sat abandoned until 1984.

When C&P Telephone bought the land it sat on, it was in danger of being scrapped. Geneva Hill, a Chester native rallied the citizens to save it.

For years, the teapot was moved around town as money was raised for restoration and problems were discovered and resolved.

Finally, in 1990, the teapot was moved to a location at the intersection of Old Highway 30 and State Highway 2, and a white fence was built around it. When we visited, even the little creamer had been restored. 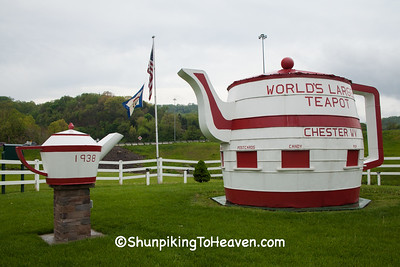 If you pay attention when you’re traveling, you’ll be surprised by some of the interesting, or kitschy things you might be able to take a slight detour to see.