As I snapped my pictures, the owner came out and explained that the drive-in was recently renovated and they were hoping to open for the summer season. He told me how he had acquired the hot dog statue and also the vintage car driven by Elvis that was adorning the front of the building. I wished him good luck with his new business and we went on our way. 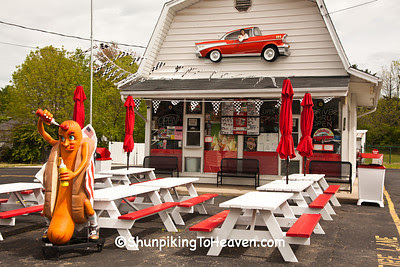 A quick Google search today revealed that the drive-in had some bad reviews in 2013 and their Facebook page now says, “Permanently Closed.” Hopefully, this wonderful little drive-in will get new owners (or maybe it already has) because it would be a shame to lose this nostalgic drive-in.

Monday, July 27, is National Korean War Veterans Armistice Day. In 1998, July 27 was declared a national day of recognition by then President Bill Clinton to honor the more than 37,000 US service personnel who lost their lives during the Korean War.

The Korean War began on June 25, 1950. By December of that year, negotiations were already underway for an armistice. It took until July 27, 1953 for the armistice to be signed. This was supposed to end all hostilities until a final peaceful settlement was achieved. To this day, that has not happened. 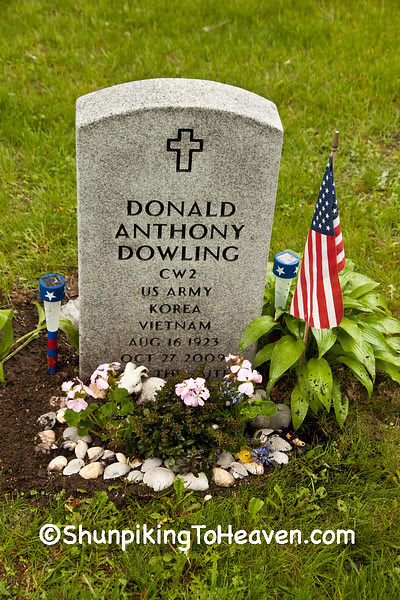 In our travels, Joann and I have been visiting more cemeteries. We are drawn to the older sections of these cemeteries, but sometimes we stumble on the graves of Korean War Veterans. When we find them, it is usually because of the setting, or the flags and markers, or flowers around the grave. 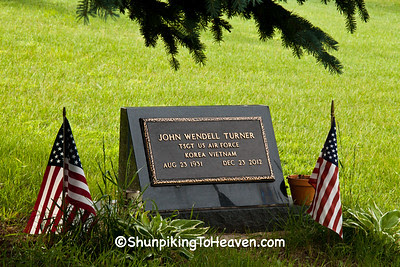 As we travel through small towns and cities, we find many patriotic displays like the one below on the roof of a Madison VFW Hall. We noticed this flag on a sunny day and returned at first light a few days later to capture it. 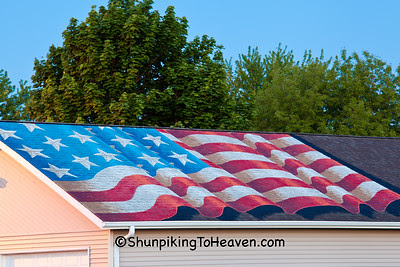 In 2013, on a trip to Ohio, we started out on a scenic route through some small towns of Illinois and passed by the Fairmount Cemetery. A tree had come down near the road, and someone had carved this eagle and American Flag from the stump of the tree. 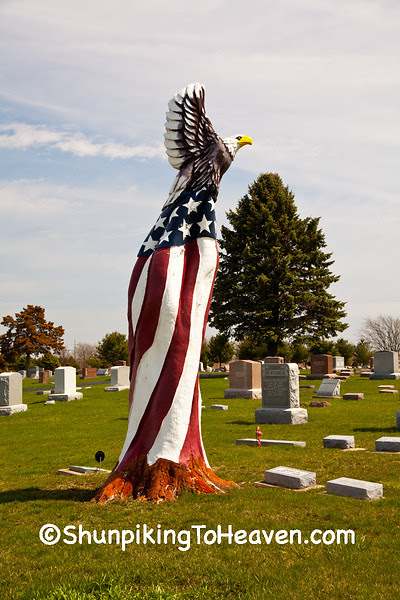 The Korean War has long been known as “The Forgotten War”, but as Korean War Veterans are now in their 80’s, there seems to be more attention paid to remembering them. This year marks the 62nd anniversary of the armistice, and many ceremonies are planned around the country.

Many people remember the Korean War from the long-running show MASH, which had the most watched series finale of all time. The final episode ended with an aerial shot of the word goodbye spelled out with rocks on the helipad. It was a goodbye from B.J. to his friend and tent mate Hawkeye. 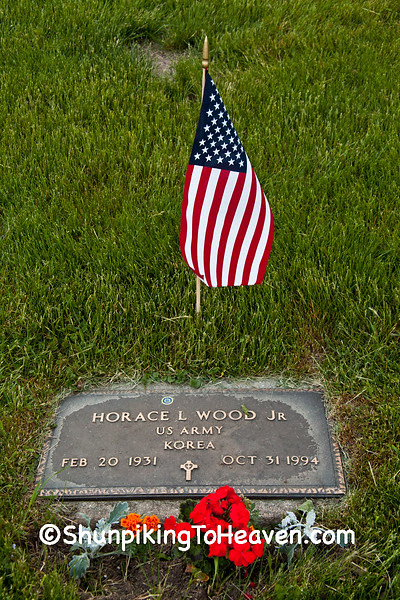 If you enjoy visiting cemeteries, be sure to check out the back of the gravestones, and you will often find a flat military marker attached to the headstone. It will list the branch of service, and the wars they fought in. 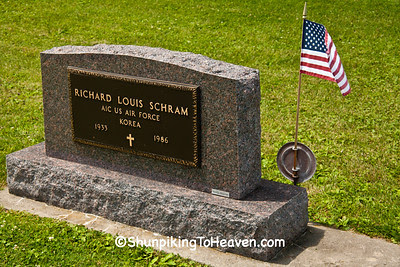 Thanks to all of our Korean War Veterans for their service.

On October 3, 2009, Ruth and I took a photography trip to Minnesota. We always pick a subject to photograph at first light and on this trip, we decided that we wanted to be at the Pickwick Mill near Winona, Minnesota. The mill is located across the Mighty Mississippi River from the small town of Trempealeau, Wisconsin. It is about three hours from my house, so that meant that we had to leave home around 3:00 am in order to allow a couple of stretch breaks on the way and still be at the mill at the crack of dawn. 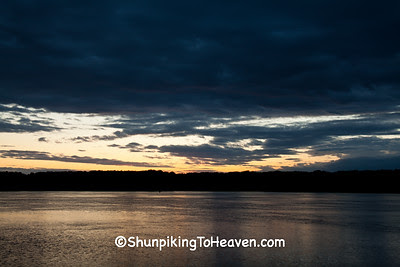 We took I-90 to the Mississippi, then crossed over into Minnesota. It was still quite dark as we made our way along the river toward Pickwick Mill. Ruth was looking out her window at the river when all of a sudden she said, “I think I just saw the Loch Ness Monster.” We began to giggle, which turned into hysterical laughing that was unstoppable (probably due to how tired we both were for having gotten up in the middle of the night). 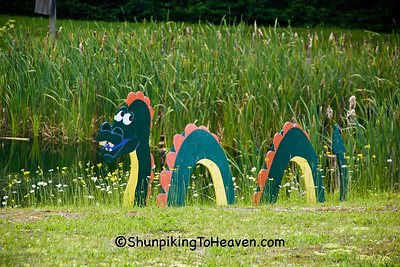 As the tears rolled down our cheeks from laughing so hard, I almost had to pull the car over until I could get control of myself. Luckily, there were few other cars on the road at that hour. Since that “sighting,” we’ve been on the lookout for sea monsters. We’ve found them in some unlikely places, such as on the side of this barn in Vernon County, Wisconsin. 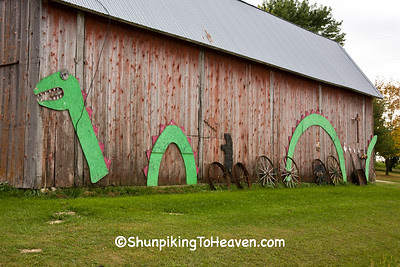 On July 17 of this year, there were news reports about Steve Feltham, a man who has been looking for the legendary Loch Ness monster for the past 24 years and who holds a Guinness World Record for the longest monster hunting vigil. According to the news, Mr. Feltham has concluded that, rather than some form of prehistoric monster, the Loch Ness monster is likely a Wels catfish. According to Wikipedia, these fish can grow up to 13 feet in length and weigh over 800 pounds. 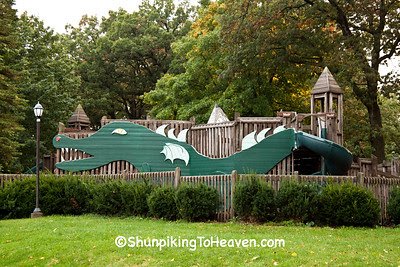 Mr. Feltham left his home, his job, and his girlfriend in 1991 to live on the shores of Loch Ness and to scan the waters for the legendary monster. Although he has suggested that the “monster” is most likely a catfish, he isn’t claiming to have solved the mystery that has baffled people for the past 70 years. In fact, he has said that he plans to continue his search. 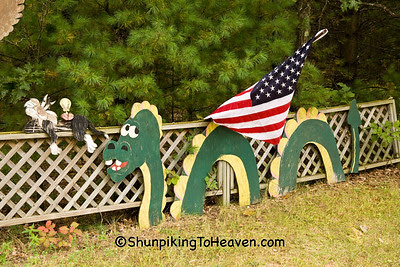 Ruth and I will also continue our search for these mythical creatures of the water (and land). Our latest sighting occurred in Burlington, Iowa, during our spring photography trip this year. As I returned to the car after doing some early morning photography, I noticed a whimsical sea monster painted on a park bench near the car. 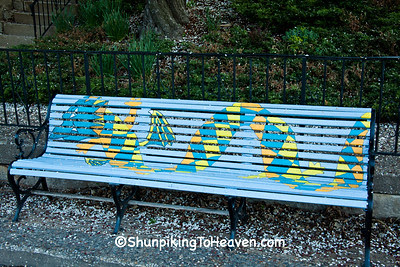 If you enjoy mythical creatures such as Nessie, the Loch Ness monster, keep an eye out for them. You never know when they will appear before your very eyes.

The Amazing Birds at My Windows

On March 1 of this year, as I worked on my laptop at the breakfast counter, something caught my eye outside my dining room window. When I turned my head to see what it was, I was startled to see a large Pileated Woodpecker hanging on the peanut feeder just outside the window. I slowly turned around to watch it and I noted that it stayed on the feeder for NINE minutes. 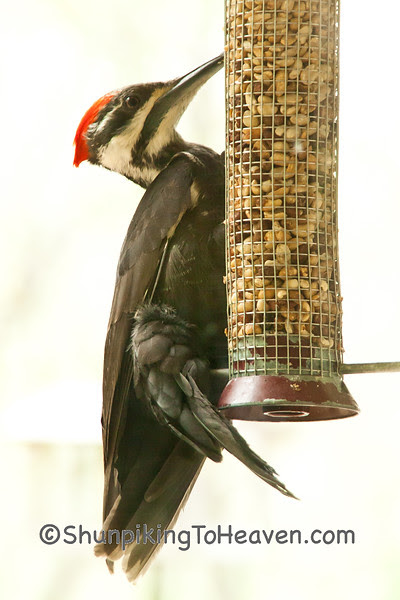 It’s only about 14 feet from my dining room window to the start of the woods. I first moved here in 2003 and, sometime during the first year, a Pileated Woodpecker landed on the ground at the edge of the woods. I was very excited about this because I had never seen one that close. 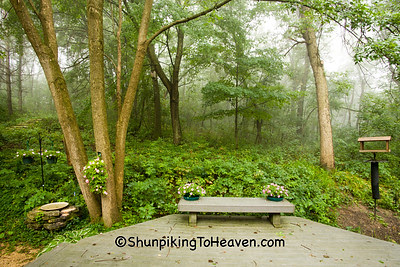 This Pileated Woodpecker also tried to get some suet from a small suet feeder that was hanging on a bird feeder pole. So I went out and bought another suet feeder made for larger birds. It had a long wooden “tail rest” at the bottom, which would be perfect for such a large woodpecker. I hung it on the tree above the bird bath. However, as the years went by, no Pileated Woodpeckers came to that suet feeder. I had often heard their distinct call coming from somewhere in the woods, but had only seen them in the distance.

To my surprise and delight, 2015 has been quite a different story. Throughout the months of March, April, and May, a Pileated Woodpecker continued to visit the peanut feeder several times a day, staying for as long as 13 minutes. 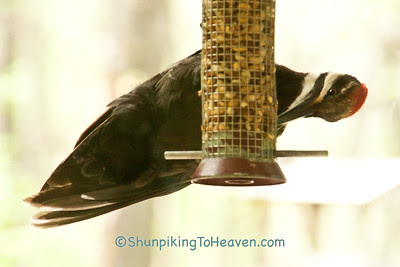 Because Pileated Woodpeckers are shy and cautious, and I have only seen them occasionally over the years, I wasn’t sure how to tell if it was a male or a female. And for some reason, I never took the time to look in any of my birding guides until today. I had my camera at the ready only one of the times that the bird visited, so I only have pictures of the female. But several times, I did briefly see another pileated woodpecker land on the tree by the deck while the other one of the pair was on the peanut feeder. 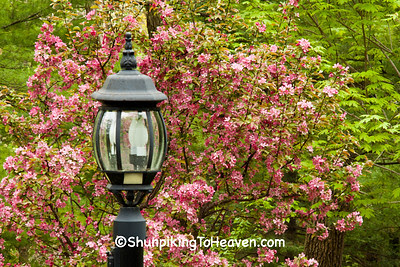 When spring arrived, I put out my hummingbird feeders and immediately had Ruby-throated Hummingbirds coming close to my kitchen window for a drink. What was truly amazing was that there were hummingbirds (members of the smallest bird species in existence) at my kitchen window, while a few feet away at my dining room window, there was often a Pileated Woodpecker (the largest woodpecker known to exist in North America) eating from the peanut feeder. 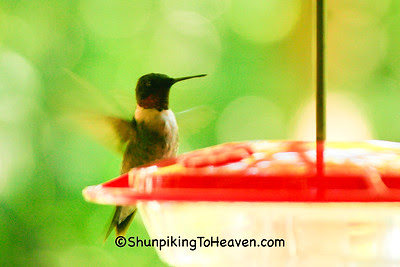 According to the Cornell Lab of Ornithology, the Ruby-throated Hummingbird weighs a mere .1 to .2 ounces, has a wingspan of 3.1 to 4.3 inches, and beats its wings about 53 times a second. The Ruby-throated is the only breeding hummingbird in eastern North America. Pairs are together only long enough for courtship and mating and they migrate to Central America for the winter. 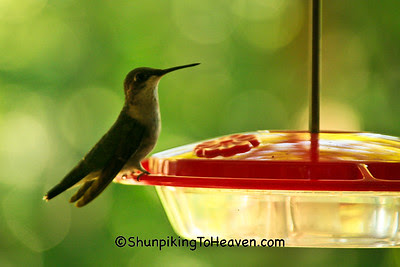 The Pileated Woodpecker, according to Cornell, is “one of the biggest, most striking forest birds on the continent.” It weighs 8.8 to 12.3 ounces, has a wingspan of 26 to 29.5 inches, and its wingbeats are “strong, but slow.” Pairs are together for life and they remain in their territory year-round. 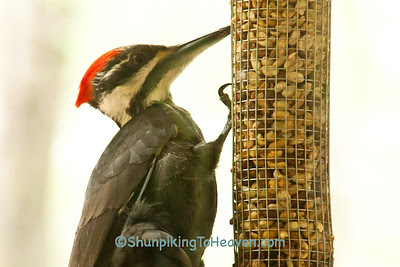 Finally, for those of you who believe in animal totems, the woodpecker is a sign of great changes. When a woodpecker comes knocking, remember to seize the moment!