Since 1776, when America declared its independence from Great Britain, Americans have celebrated their independence during the month of July. Our independence was hard-won by our ancestors who served this country in the American Revolution, which was fought from 1775 to 1783. 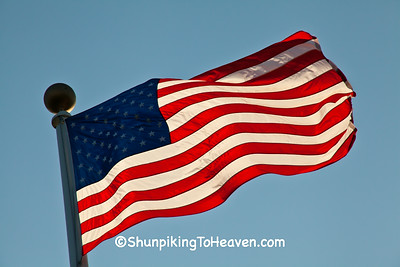 I was surprised recently to learn that there are 40 veterans of the Revolutionary War buried here in Wisconsin. This year, during the July 4th weekend, Ruth and I visited the Old Fort Winnebago Cemetery, where two of these veterans are buried.

As you enter Old Fort Winnebago Cemetery, a National Soldiers’ Lot, there is a historic marker to the left of the gate with information about Patriots Cooper Pixley and Alexander Porter, the two Revolutionary War soldiers buried there. Just inside the gate is a memorial marker “to the memory of our historic dead” that was erected in 1915 by the Daughters of the American Revolution.

According to the historical marker, Cooper Pixley was born in Massachusetts on July 16, 1763 and he enlisted at the age of 15. Following the Revolution, he lived in New York and Canada, moving to Portage in June 1849. Cooper Pixley died March 12, 1855.

Alexander Porter was born December 14, 1757 in Connecticut. On July 11, 1775, 18-year-old Porter enlisted in the Revolution. After the war, Alexander lived in Hebron, Connecticut and Oppenheim, New York, where he died April 28, 1833. He was originally buried in Freedom, New York, with his remains being moved to Portage and reinterred in this cemetery in 1924.

When the U.S. again fought Great Britain in the War of 1812, the only battle fought on Wisconsin soil took place on July 17, 1814 at Fort Shelby in Prairie du Chien. This year, a re-enactment of this battle took place at the Villa Louis in Prairie du Chien to commemorate the 200th anniversary of the battle.

The Old Fort Winnebago Cemetery is also the final resting place of at least two veterans of the War of 1812.

We owe our independence and our freedom to the brave soldiers who have selflessly served this country since its beginning.