If you guessed Lexington, Kentucky, you’re right! If you went further and figured out I’m at the Parkette Drive-In, you’re GOOD!

It was closed again in 2007 for renovation and was bought by Randy Kaplan and his brother Jeff. They reopened the restaurant in the spring of 2009.

The Diners, Drive-Ins, and Dives episode featuring the Parkette Drive-In aired on the Food Network on September 20, 2010.

I was parked at one of the outdoor speakers and Joann tried several times to order, but it must not have been working. They ended up leaving without their treat…..oh well.

Thanks for guessing and Happy Shunpiking!
James

Posted by Shunpiker at 10:38 PM No comments:

Ready for another quiz? Let’s try something from our travels.

I’m in one of the four states known as a Commonwealth.

Fayette County is home to the city I’m in.

The city’s slogan is “Horse Capital of the World”.

For extra credit, I’m parked at a restaurant featured on the Food Network show “Diners, Drive-Ins, and Dives”.

Where am I? (And if you’re really good, what restaurant am I at?)

Please leave us a comment with your guess and tune back in for the answer.

Until then, Happy Shunpiking!
James

As we enter into a new year and look forward to our best year ever, it’s good to reflect on the year we’ve left behind.

Last winter was brutally cold beginning in January, so Ruth and I ventured out only once on a sunny day in February. We captured this wonderful old one-room schoolhouse, which says “District No. 3, 1895” on the front. As I was standing on the road in front of the school, a car pulled up and a kind woman informed me that the school was known as Hillside School.

We spent the rest of the winter preparing for our spring photography trip. On April 19, we headed toward Kentucky, passing through the town of Robinson, Illinois. There I discovered a photographer’s studio in an old brick building.

And whenever I photograph an old building, I always check for interesting doors and doorknobs. This one had a great porcelain knob.

The next state we passed through was Indiana, where I captured the window of a post office in an old general store, which was originally located in New Philadelphia, Indiana.

The backroads of Kentucky provided some great rural architecture, like this weatherworn old house.

We also explored many small towns, where we found some great subjects, such as this old barber shop.

And, of course, it had an old-fashioned barber pole that was too good to pass up.

We returned home in late April and found that winter still had a grip on Wisconsin. That left us plenty of time to thoroughly enjoy Wisconsin spring when it did arrive. In mid-May, on a beautiful spring day, we captured this historic Lutheran church near Mount Horeb.

In June, family commitments kept us from hitting the backroads, but we did stop on Father’s Day to capture a Chicago-style hot dog stand in Lake Mills. When we were growing up there in the late 60’s and early 70’s, the building was a cottage-style gas station, which originally opened in the 1940s as a Pure Service Station.

On the July 4th weekend, we had a marathon photography day in the eastern part of the state. Around mid-morning, we passed through the small town of Kingston, stopping to photograph a small patriotic display on the porch of the old Kingston House restaurant.

As I surveyed the rest of the downtown area for photo opportunities, I saw several people lounging in front of an old store.

“What’s going on?” one of them asked from across the street.
“Looks like nothin’!” I joked, referring to their lounging.

They all laughed and then I crossed the street and had a nice chat with them before heading back to the car.

August found us on the backroads of Sauk County, which we visit often due to its close proximity to Dane County, where we live. 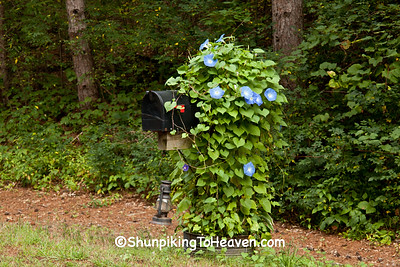 We often visit our neighboring state, Iowa, in September and 2014 was no exception. On a late September day, on the backroads of Iowa, we discovered a very long fence decorated by various sizes of rusty wagon wheels. I can’t imagine how long it took to collect them and place them in a row. And there was a very cooperative horse and an Amish farm to accent my photos of the fence.

A couple days after we returned from Iowa, we started our fall photography here in Wisconsin. And for the first time, we enjoyed the annual Farm/Art DTour, which is described as “a 50-mile self-guided back roads tour by car, bike or buggy through the beautiful, unglaciated hills and valleys of Sauk County.”

We explored half the route on a rainy Friday and thoroughly enjoyed ourselves with roadside artistic displays like this takeoff from the movie, “Driving Miss Daisy.”

A day later, we left on a four-day trip to northwestern Wisconsin, going as far north as St. Croix Falls. While there, we crossed the St. Croix River for the evening to explore Taylors Falls, Minnesota. While there, we stopped to capture some fall color by the historic Folsom House, which was built in 1855 by lumberman William Henry Carman Folsom.

On the last day of this four-day trip, we came back through Sauk County, Wisconsin and explored the other half of the Farm/Art DTour. One of the most interesting creations was a depiction of kudzu leaves overtaking an abandoned farmhouse. The leaves, created by artist Isabelle Garbani, from Brooklyn, New York, were crocheted from plastic shopping bags.

As much as I enjoy traveling the backroads of Wisconsin in autumn, it’s always nice to return home to enjoy the view out my own back door.

Lookin' Out My Back Door, Dane County, Wisconsin

Winter came early with the first measureable snowfall in mid-November. Luckily, this happened on a Sunday morning, so I had the opportunity to visit Council Spring in the UW Arboretum.

As I mentioned in my last post, there wasn’t any measurable snow in December and the November snow had melted during a warm stretch. However, I still took the opportunity to photograph the lighted tree at the Fair Valley School in Sauk City as I passed through there one evening in December. 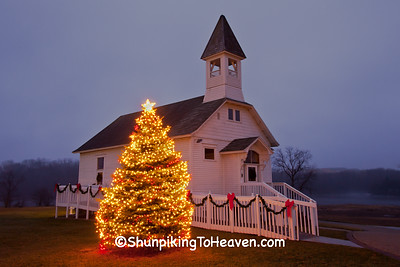 As I write this, the snow is coming down outside my window and the wind is blowing heavily, with a forecast of below zero temperatures for the next week. So I will continue to wait for conditions that are conducive to good photography.

In the meantime, I hope 2015 is starting off well for everyone and that the new year brings much happiness and good health to you all!