One of the most interesting encounters I had on our recent trip to North Carolina was with a man and his dogs. It was our third day in North Carolina and we had just entered Alamance County. As we drove down a country road, we passed an old red and white Chevy automobile with a “For Sale” sign on it. It was early afternoon on a very sunny day, so the lighting was pretty harsh, but I decided to snap a couple of pictures of the old car anyway.

As I set up my tripod, I heard some dogs barking from across the road. When I turned around to see what the commotion was about, I realized that the dogs were about to run out into the road. Just then, an older gentleman with white hair came out of a large shed and scolded the dogs. “Rowdy! Rambo! Get back here!” he shouted. As I watched him, I realized that he looked a lot like the eccentric inventor, Dr. Emmett Brown, in the movie Back to the Futue. 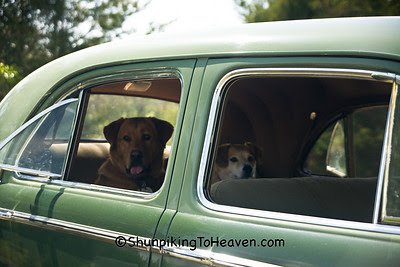 Rambo and Rowdy Waiting for a Ride in a 1940 Buick Special, Alamance County, North Carolina
I went across the road and introduced myself and he said his name was Cary, “spelled like Cary Grant.” He told me that the old car was a 1955 Chevy Bel Air two-door hard top and that it was pretty rare. He said that, if he had restored it, it would be worth about four times what he was asking for it in its present condition. Then he said, “I’ve also got a 1940 Buick Special in the shed. It’s fully restored and it runs perfectly. Would you like me to pull it out so you can take a picture of it?” 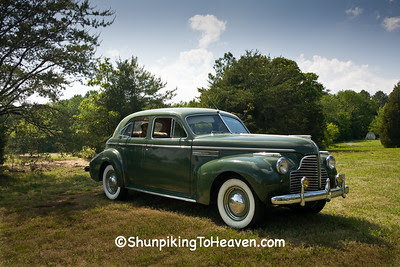 I said, “Sure, that would be great!” Cary quickly turned around and headed into the shed. Rowdy and Rambo were running around in front of the shed. As I tried to get a photograph of them, Cary called from the shed, “Come on, get in.” I wasn’t sure if he was talking to me, but then Rowdy and Rambo made a mad dash for the back seat. Cary started up the Buick Special, revved up the engine (which he later explained was a Straight-8), and backed the car out of the shed. He drove it across the road and towards the Chevy Bel Air. 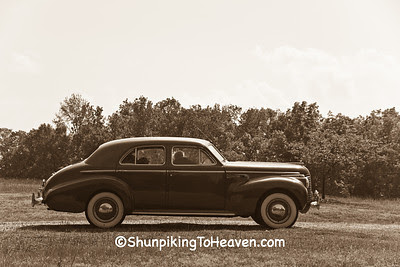 I was still standing on the other side of the road by the shed, and as Cary stopped the car, I noticed a great silhouette with him in the driver’s seat and Rowdy’s profile in the back seat. I attempted to capture the silhouette, but Cary was too quick to jump out of the car. It was then that I realized that, although his appearance reminded me of Dr. Emmett Brown, his mannerisms reminded me of the character, Kramer, from the sitcom Seinfeld. 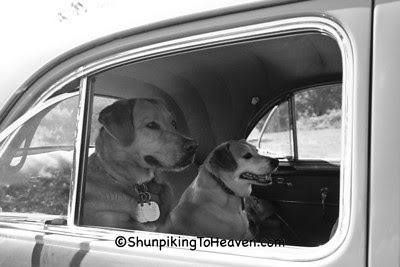 Rambo and Rowdy Waiting for a Ride in a 1940 Buick Special, Alamance County, North Carolina

I crossed the road and Cary asked me if he had parked the Buick Special in a good spot for my photos. I asked him if he could move it a bit so that there was a better background. He willingly obliged and, all the while, Rambo and Rowdy were sitting in the back seat, just like a couple of people waiting for the chauffeur to drive them somewhere. 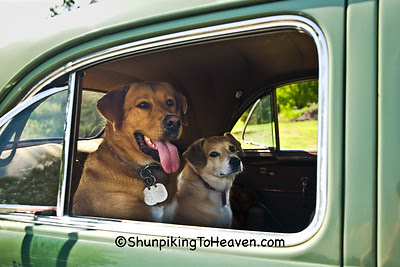 Rambo and Rowdy Waiting for a Ride in a 1940 Buick Special, Alamance County, North Carolina

I took a couple of shots of the Buick Special and then pulled in close to capture Rowdy and Rambo as they waited patiently in the back seat for the short ride back to the shed. And while I photographed them, I couldn’t help but laugh out loud. You never know who you’ll meet as you travel the back roads of this great country. In this case, two rambunctious dogs, Rowdy and Rambo, had made my day.

Posted by Shunpiker at 2:57 PM