In the spring of 2017, we returned to Ohio for our fifth 10-day photography trip in that beautiful and historical state. One of the subjects Ruth had researched was the history of Annie Oakley, so she had several locations marked having to do with this world famous sharpshooter. We spent the first two days photographing our way across Illinois and Indiana. On the third day, we crossed into Ohio and were soon in the Willowdell area, Annie's birthplace. 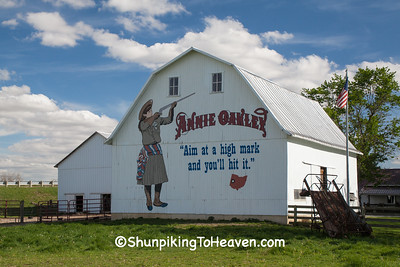 Annie Oakley was born Phoebe Ann Moses (or Mosey) on August 13, 1860. Her family called her Annie. According to the Annie Oakley Center Foundation, there has always been confusion over the family name. In fact, the historical sign at her birthplace said “Moses” and the one at her gravesite said “Mosey.”

Annie’s father Jacob fought at a very young age in the War of 1812. In 1848, at the age of 49, he married Susan Wise, who was 16 years old. Jacob and Susan were Quakers who came from Pennsylvania to settle on a farm in rural Darke County, Ohio, near the Indiana border. By 1865, they had nine children (two of whom died as infants). The photo below shows a simple memorial that marks the location where Annie was born. 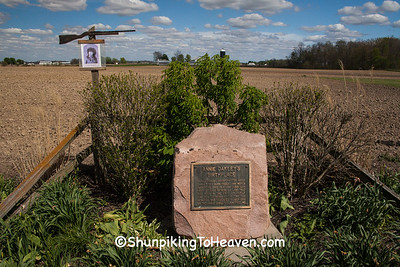 Jacob and Susan worked hard to feed and clothe their family. They raised corn and wheat, which Jacob hauled 20 miles with a horse-drawn wagon to Bear’s Mill to be ground. Sometime during the winter of 1865, Jacob made this trip to purchase supplies and to have his grain ground. During the trip, a snowstorm blew in and Jacob struggled to get home. He fell ill with pneumonia from the overexposure to freezing temperatures and died on February 11, 1866 at the age of 66. When I discovered this fact about Bear’s Mill, I realized that we had visited the mill on a short 3-day trip to Ohio in 2004 on our way to see the Christmas lights at Clifton Mill.

At the time of Jacob’s death, Annie’s mother Susan was left with seven children, aged one to 14. Annie was only five years old. Susan moved the family to a smaller home and everyone pitched in to support the family. And then another tragedy hit. A mere 14 months after Jacob died, their oldest child, Mary Jane, died of tuberculosis 11 days before her 16th birthday. Susan didn’t have the money to pay Mary Jane’s doctor and funeral expenses, so she sold their pet milk cow.

Annie helped feed her family by trapping birds and small animals. Around age seven, she began using the muzzle-loading gun that had belonged to her father and discovered she had a natural talent for shooting. In fact, Annie was so good at shooting game that she was able to contribute financially to her family by selling it to the Katzenberger Brothers’ Grocery Store in Greenville. They distributed it to restaurants and hotels in Cincinnati. By the age of 15, Annie had paid off the mortgage on her family’s home.

On Thanksgiving Day, 1875, 15-year-old Annie was invited to participate in a shooting contest with champion marksman Frank E. Butler, who was in a traveling show in Cincinnati. Butler, in his mid-twenties, was astonished when Annie beat him by making 25 shots out of her 25 attempts, while he missed one of his 25 attempts. Not only did Annie win the shooting match, but she captured Frank’s heart. On August 23, 1876, they were married. Annie had just turned 16, the same age her mother was when she married Annie’s father.

In May 1882, Annie and Frank began performing together and Annie chose the stage name “Annie Oakley.” No one is sure about the origin of this name, but Oakley was a neighborhood in Cincinnati where she and Frank lived. For three years, either Frank received top billing or he and Annie shared it. In April 1885, Annie and Frank began performing in Buffalo Bill’s Wild West show. Annie quickly became the star, with posters advertising her as “Champion Markswoman.” Frank was proud of his wife and gladly stepped back to manage her career and assist with her shooting tricks.

From 75 feet away, Annie could hit the thin edge of a playing card. She could also shoot off the end of a cigarette that Frank held between his lips and hit distant targets by looking at them in a mirror. From 90 feet, she could shoot the cork out of a bottle or put out a candle flame. If Frank tossed playing cards into the air, Annie could shoot holes in them before they hit the ground. At only five feet tall, and because of her talent and confidence, Annie earned the name “Little Sure Shot,” which was given to her by Sitting Bull, the Sioux (Lakota) leader. 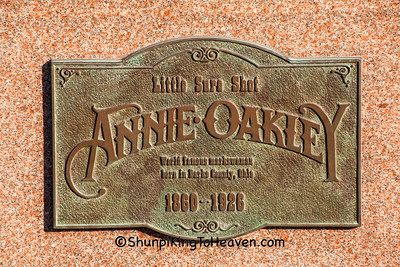 Annie and Frank performed in Buffalo Bill’s Wild West show for 16 seasons. They left the show in 1901 after a serious train accident injured Annie’s back. The couple continued to perform on a less demanding schedule, retiring from show business in 1913. In retirement, Annie spent her time giving shooting lessons to women, performing at charity events, and hunting (which she had enjoyed since she was a small child). On November 3, 1926, Annie died of pernicious anemia at the age of 66 (the same age at which her father had died).

At the time of Annie’s death, she and Frank had been happily married for fifty years. Frank was heartbroken and just stopped eating. He died 18 days after Annie on November 21, 1926. They are both buried in the Moses family plot in beautiful Brock Cemetery, about 8 miles from where Annie was born.

At Annie Oakley Park in Greenville, Ohio, the following quote is attributed to Annie Oakley, a Legend in Her Own Time - "Aim at a high mark and you'll hit it. No, not the first time, nor the second time and maybe not the third, but keep on aiming and keep on shooting for only practice will make you perfect. Finally you'll hit the bull's eye of success."