In the spring of 2016, we returned to Ohio, one of our favorite states for rural and historical photography. We spent the first few days photographing in the towns, cities, and countryside along the Ohio River. At first light on the fourth day of this eleven-day trip, we crossed the river to visit Maysville, Kentucky, the hometown of actor Rosemary Clooney. After visiting the Russell Theater where Rosemary’s first film premiered, we headed towards the flood wall where there was a mural featuring Ms. Clooney. On the way, we passed an old building that said it was the Modern Laundry.

We love old storefronts, so we pulled into the parking lot beside the building. There was a coin-operated laundromat at the back end of the building. Covering much of the side of the laundry and dry cleaning building was the biggest No Parking sign we had ever seen. In HUGE letters, it said, “NO PARKING” and beneath that “except while in laundry or coin-op.” Unfortunately for us, there was one car parked in front of the sign. 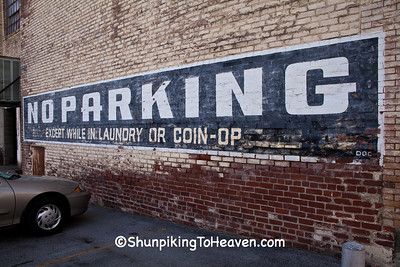 We parked the car further back in the parking lot and as I got out my camera equipment, I could see workers moving around on the loading dock of the building. Although it was still pretty early in the morning, the laundry was actually open to customers. I went inside to ask if it was okay if I took some pictures of the front of the building. The people working in the laundry were extremely friendly and gave me permission to take some photographs. As we talked, I noticed some historical photos that were framed and hanging on the wall by the service counter. When I started looking at them, they eagerly gave me some historical information about Modern Laundry. 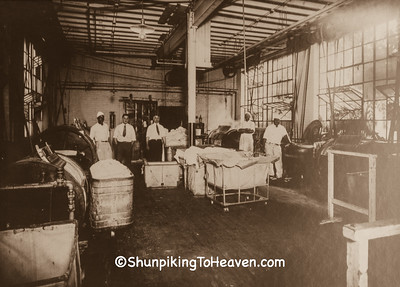 In 2015, Modern Laundry celebrated 100 years since its incorporation in 1915. However, they have actually been in business since Ernest Roden founded Modern Laundry in 1895. There was a wonderful sepia-toned photograph in a fitting rustic wooden frame, which I believe was taken in 1901. If I have this correct, it shows Ernest Roden, some of his employees, and a horse and buggy in front of the original Modern Laundry building.

In those days, they transported their customers’ laundry to the train depot where it would be taken by train to Cincinnati, Ohio to be cleaned. The clean laundry would then be sent back on the train to be returned to their customers at their Maysville store. 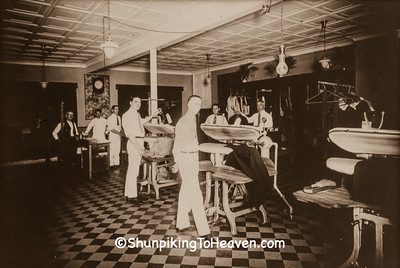 Sometime in the early 1900’s, Mr. Roden decided to expand Modern Laundry so they could offer on-site washing and dry-cleaning services to their customers. They moved to their current location in 1923. A 1935 book entitled “The Spirit of a Greater Maysville and Mason County” featured many of Maysville’s businesses. It said that the Modern Laundry and Dry Cleaning Company’s plant was “one of the most complete and up-to-date.” At that time, it employed more than 40 people. Today, the company is still owned and operated by descendants of the original founder. 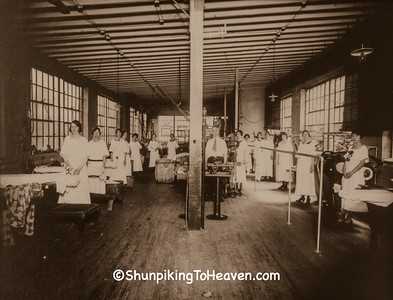 My favorite among the historical photos they allowed me to photograph is this picture of the current Modern Laundry building in 1944. There are mountains of dirty laundry bags piled on the sidewalk in front of the store. My guess is that this was before they had a loading dock and the dirty laundry was picked up in the early morning hours before the business opened for the day. The building on the left in this photo was replaced with the parking lot. 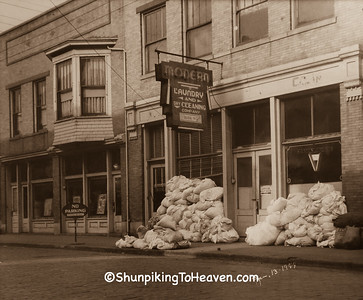 If I could make one wish come true about this visit to Modern Laundry, it would be to find the old-fashioned neon Modern Laundry sign still there. It said “Modern Laundry and Dry Cleaning Company.” Below that was their slogan: “Striving to Please.” And one humorous thing to note is the size of the No Parking sign in this photo as compared to the monstrous one that currently resides on the side of the building.

I’d like to thank the folks at Modern Laundry for allowing me to peer into their wonderful historical past. 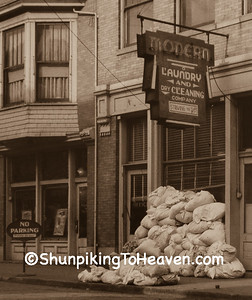 A Detour to Grand Marais

At the end of June in 2010, Joann and I were starting to head for home from a marathon photography trip to northeastern Minnesota, when we visited the Toimi School. Toimi was settled by Finnish pioneers and the school is the only remaining building. 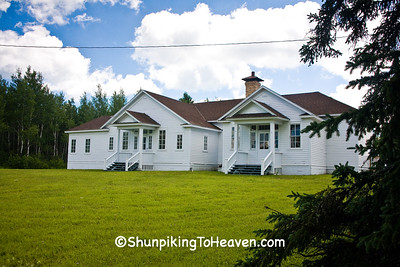 The school was built in 1913. As the number of students increased, an addition was needed. At the same time, an apartment for the teacher was also added.

The school also functioned as a meeting place for the whole community with dances and meetings being held there. In 1923, the Toimi Town Hall was built just across the road and community functions moved there.

Toimi School, Lake County, Minnesota
From a high of almost 100 students, enrollment began to decrease until the school was closed in 1942.

After the school closed, it was used as a storage building for the U.S. Forest Service fire fighting supplies and then as a garage for the Lake County Highway Department.

In 1977 a full school reunion of former classmates was held. This was the first public event at the school since its closure in 1942.

Toimi School, Lake County, Minnesota
In 1991, ownership was transferred from the Lake County Board of Commissioners to the Toimi School Community Center Committee and restoration work began. Since the building had been used by the Forest Service and then by the county, the building was still structurally sound. The building has been totally restored to its former glory.

We left the school and headed for highway 61, which follows the shore of Lake Superior. On the way we discussed whether we should take a detour and go north to visit Grand Marais where I had several historic locations marked to photograph. We decided we didn’t know when we would get that far north again, so we’d go on this trip. 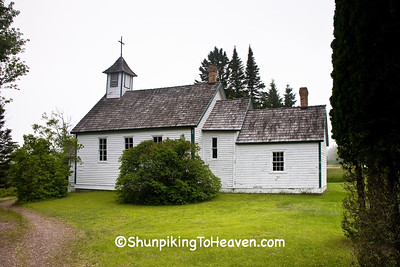 Since it was summer and vacation time, there was a lot of traffic heading north, and it was slow going. It was also foggy with intermittent rain showers.

When we finally arrived at Grand Marais, we decided to head to the northern edge of town to visit St. Francis Xavier Church. It is the only building remaining in what was the town of Chippewa City. 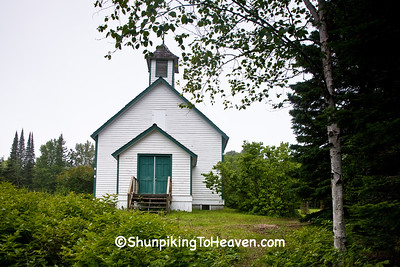 Chippewa City was an Ojibwe community of about 100 families located near this site. Jesuit missionaries held services in residents’ homes until the church was established in 1895. To raise money for construction, local women held basket socials where area lumberjacks bid heavily on handmade birch bark baskets filled with home-baked goods. 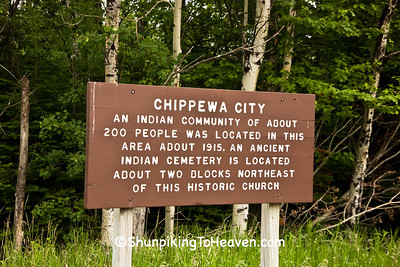 Jesuit priests served Chippewa City until 1905 when Benedictines from St. John's Abbey in Collegeville, Minnesota, became responsible for this territory. They, like the Jesuits, made only monthly visits until 1933, when Father Oswald Johannes became the resident pastor.

For a time, he alternated Sunday services between this church and the newly-constructed St. John the Baptist Church in Grand Marais. A declining congregation forced St. Francis Xavier Church, the last remaining building in Chippewa City, to close in 1936. Its religious functions were transferred to the Grand Marais church. Although empty for decades, this church remains an important example of the state's 19th century Indian missions. It was restored in 1970-1974.

After visiting this historic church, we came back into Grand Marais to find the Bill Bally Blacksmith Shop. 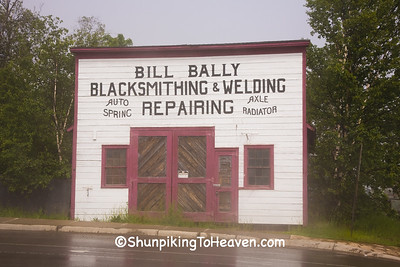 The building’s original owner was Sam Bally, who relocated from Bayfield, Wisconsin to Grand Marais in 1903. He was a blacksmith with the Cook County Manufacturing Company until he opened his own shop in 1911.

Since its founding, the Bally Blacksmith Shop has been the only blacksmith in Grand Marais. It has chronicled the history of the city from horse-drawn, lumber camp equipment to motorized commercial fishing rigs, to tourists’ automobiles and snowmobiles. The building is now maintained by the Cook County Historical Society, which bought the building from Bill’s widow in 2013. The building is host to the Annual Bally Blacksmith Shop Demo Day where you can tour the building as well as see demonstrations of blacksmithing.