In 2014, on the July 4th weekend, Ruth and I went for a long day of photographing to the northeast of Madison. Our family was going through some tough times then. Our brother Paul had died rather unexpectedly on June 4 followed by a lengthy hospital stay for our dad. So Ruth and I just needed to hit the backroads for a little stress relief.

As we often do, we left my house in the dark so we could start photographing at first light. We drove the 45 minutes to Old Fort Winnebago Cemetery near Portage, Wisconsin, and I took my first photograph of the day at 4:57 a.m.

I parked the car across the street from the Kingston House, and began to set up my tripod to photograph it. As I was aiming my camera at the supper club building, I heard the clip-clop of a horse nearby and quickly focused my camera in another direction to capture an Amish man riding behind a trotting horse. 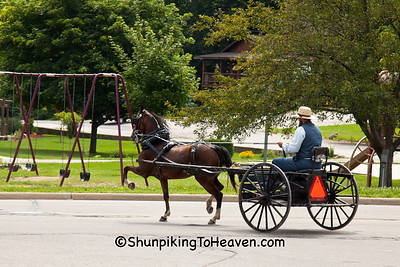 It was nearly 1:00 p.m. when we crossed into Fond du Lac County. I photographed a few farms and an old stone church and then we stopped for a picnic lunch around 2:00 p.m. After lunch, we entered Dodge County and spent a couple of hours photographing farms and cemeteries, along with a depot, a grain elevator, and a lumber building.

At some point, we stopped to fill up the gas tank and I went into the convenience store to use the restroom. When I returned to the car, the following conversation took place:

Joann: “The second time for what?”

Ruth: “When you were out by the gas pump, a dragonfly came into the car.”

Joann: “What do you mean about it being the second time?”

Ruth: “Early this morning, when you were out photographing in Kingston, two blue dragonflies were buzzing around the car and one of them flew into the car. And now, another dragonfly came into the car.”

Joann: “That IS weird. Hey, maybe Paul is sending us dragonflies to let us know he’s okay and that he hears us when we talk about him.”

Dragonflies are associated with the symbolic meaning of change and transformation, along with joy and lightness of being. And some say our loved ones who have crossed over may send us signs through butterflies, dragonflies, rainbows, cloud formations, etc. So we decided it was Paul letting us know he was fishing up in heaven like he loved to do when he was here on earth.

It was almost 4:30 p.m. when we crossed into Washington County and after 6:00 p.m. when we entered Ozaukee County. This was as far northeast as we had planned to go, but there was still much to photograph. I worked quickly and we finished capturing most of the subjects on our list. Then we headed to Stony Hill School and enjoyed a peaceful picnic supper on the school grounds. 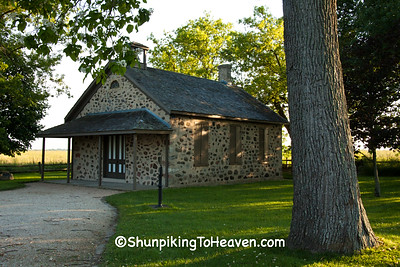 It was around 7:30 p.m. by the time we finished our supper, so we knew we’d better get started on the 2-hour drive home. About 8:40 p.m., we passed through the city of West Bend and the daylight was waning. As we sat at a stoplight, I realized that we had planned to make it to West Bend with enough daylight to visit a labyrinth garden where the grassy pathway is lined with flowers, herbs, and ornamental grasses.

As I expressed my disappointment to Ruth, she said, “Well, do you want to at least go take a quick look at it to see if it’s worth returning? I think we’re near it.” I responded, “Yes!” so she told me to take a right and we headed to Regen Park, where the labyrinth is located. I quickly parked the car in the nearest parking lot, grabbed my equipment, and literally ran back to the labyrinth, which is called Labyrinth Garden Earth Sculpture.

I entered through the arched gate and began to quickly size up the layout to see what I could capture in the few minutes of daylight that were left. It was a large labyrinth with mowed pathways between rows of beautiful flowers. I found out later that it was designed in the tradition of a seven-circuit Cretan labyrinth and it is 90 feet in diameter.

I took several shots along the pathway and then pulled in close on a couple patches of beautiful Asiatic Lilies. 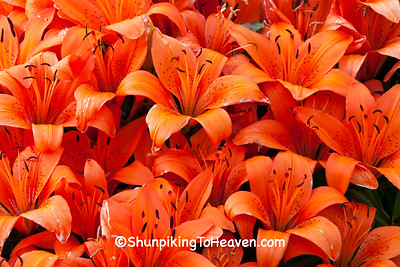 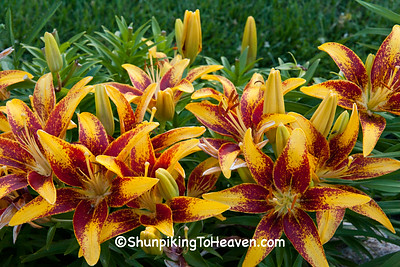 As the light was getting almost too dim to photograph, I saw some beautiful Calla Lilies that I wanted to see if I could capture as the last photos of the day. I lowered my tripod and snapped a close-up of one Calla Lily.

As I reframed for another capture, I saw an orange glow reflecting on my LCD screen on the back of the camera. I guess the Universe had other ideas about what should be my last photos of the day. As I turned around, I was stunned to see a huge dragonfly sculpture silhouetted against a beautiful sunset. 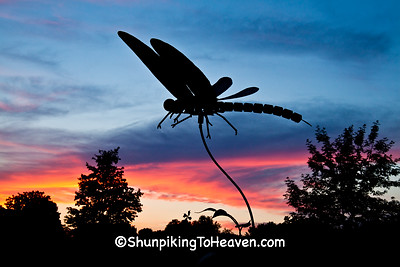 I stood for a few seconds, mesmerized by the bigger-than-life message from my brother, Paul. All is well and the Universe is a beautiful place, both here and on the other side. Since that time, I’ve had some wonderful encounters with dragonflies. Thank you, Paul, for continuing to send them as a reminder of your beautiful soul.

On Saturday, Ruth sent me a Facebook message saying that it was the anniversary of the death of legendary movie star John Wayne. She had been watching TV and wondering why they were playing a series of John Wayne movies. After discovering the reason, she suggested that we write a blog post about him next year on June 11. I decided to do it this year because I didn’t think we would remember next year. 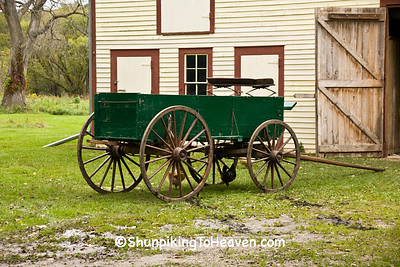 John Wayne, who was also known as Duke, was born Marion Robert Morrison on May 26, 1907, in a simple four-room house in the small central Iowa town of Winterset. Since being restored in the early 1980s, this home has been toured by more than a million visitors from all 50 states and 40 foreign countries.

John Wayne’s acting career spanned roughly 50 years and nearly 250 movies. He acted in more than 70 low-budget films before becoming a star with the release of the movie “Stagecoach” in 1939.

One of my favorite John Wayne movies is “The Man Who Shot Liberty Valance,” a 1962 Western that also stars James Stewart. Several scenes in this movie take place inside and outside the saloon in the town of Shinbone.

In 1963, John Wayne starred in a comedy Western entitled, “McLintock!”. In the movie, he plays cattle and mining baron George Washington "G.W." McLintock. G. W. would come home drunk every night and throw his hat onto the weather vane located on the dormer end of a three-story house. 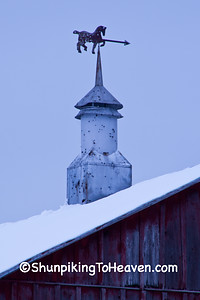