Several times Joann and I have talked about how lucky we are that nothing tragic happened to any of the children in our family working on the family farm. There were many opportunities for one of us to become hurt or maimed. Luckily nothing severe ever happened to any of us. 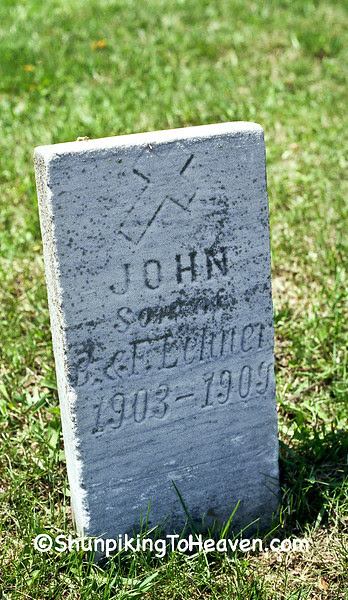 But on a trip to Spring Green in 1992, Joann photographed the grave of our great-uncle John who died at the age of six during an outbreak of diphtheria in 1909 in the Spring Green area. Our grandmother was 13 when her brother died. Joseph, another of her brothers, also came down with diphtheria, but he survived. The family was very traumatized by the disease and his death. Our great aunt Katie was only four but she could recall the strong smell of disinfectant used to wrap the body in. 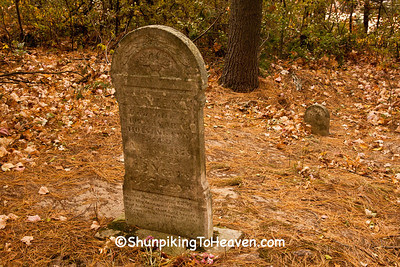 We usually don’t think about those outbreaks that befell people in the earlier days of our country. When we visit cemeteries, we often see old family sections with many children’s headstones among the graves, and we are saddened and wonder about the circumstances of their deaths. 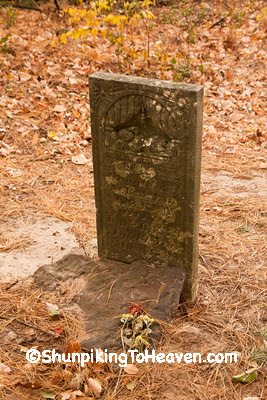 Then in the fall of 2012 on our way north, we drove down a country road that had two small unique cemeteries on it. One was named Small Pox Cemetery and the other Diphtheria Cemetery. They are only a couple of miles apart along this country road. 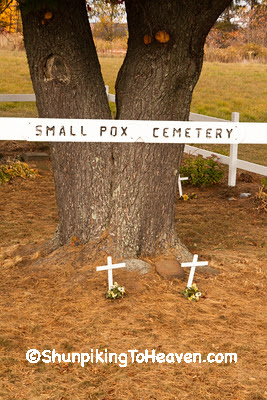 The Smallpox Cemetery is a small cemetery surrounded by a white fence. Some of the grave markers were small white crosses with no names, yet there were flowers planted at the crosses. 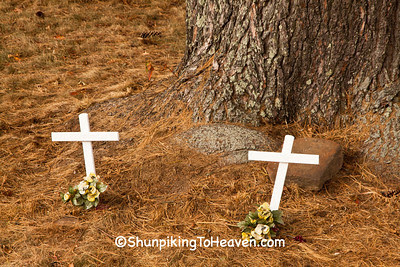 The Diphtheria Cemetery had a sign by the road and wooden steps going up the hill to the cemetery. Only a couple of gravestones in the cemetery were legible. 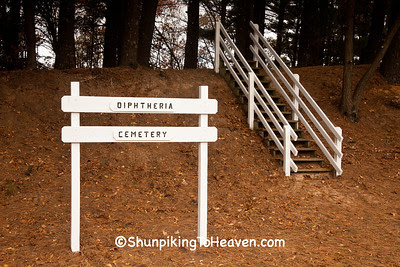 During these early outbreaks of disease, it was often the custom to have the burials during the night so that few people were around. Only one person from the family would be allowed to go to the cemetery and observe where their loved one was buried. And it couldn’t be someone who had attended the sick. For this reason, parents often could not attend their own children’s burials. Our great grandparents could not attend the burial of their six-year-old son, John. So his 15-year-old sister, Elizabeth, went. What a huge and sorrowful responsibility for a teenager! 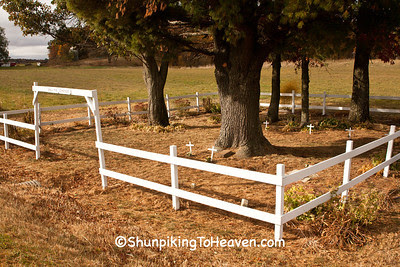 Sometimes a crier was sent before the casket to warn anyone along the way that someone who had died of small pox or diphtheria was on the way to be buried. Burials took place as soon as possible after the death. A vaccine for small pox became widely available in the late 1800’s, while the first diphtheria vaccine wasn’t available until the 1920’s. 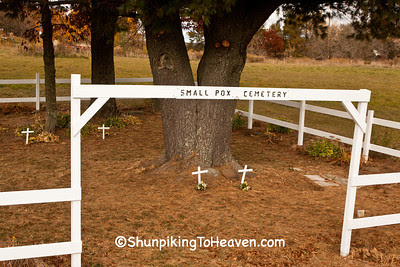 Many families lost multiple children during these outbreaks, and oftentimes one or more adults who attended the sick children would also succumb to the disease. 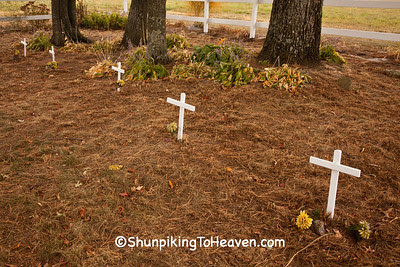 The stories of these two cemeteries show that this was the case in this area for these diseases. Two families lost ten family members to smallpox, while another lost five children to diphtheria. 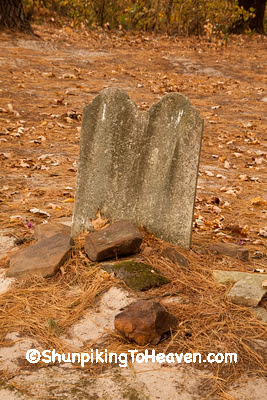 If you pass an old cemetery along the road, and you have a few minutes to spare, walk among the gravestones. You may feel the same feeling of peace that we do.

When we were kids, we often played a game called Chutes and Ladders. This game was released by Milton Bradley in 1943 and consisted of a game board with 100 numbered squares. Scattered among those squares were various chutes and ladders. 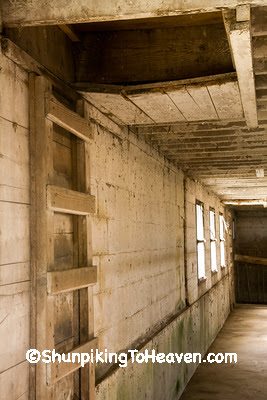 The object of the game was to move your token along the numbered squares starting from Square 1 and be the first player to land on Square 100. Players flicked a spinner with the numbers 1 to 6 and then moved the corresponding number of squares on the board. If they landed at the foot of a ladder, they could instantly climb to the top of the ladder, which usually advanced them many more squares closer to Square 100. 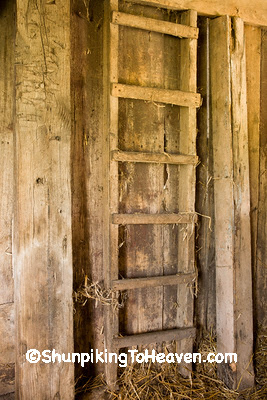 If they landed at the top of a chute, they had to instantly slide down the chute, which resulted in their token being taken back towards Square 1. It was a fun game based totally on luck. 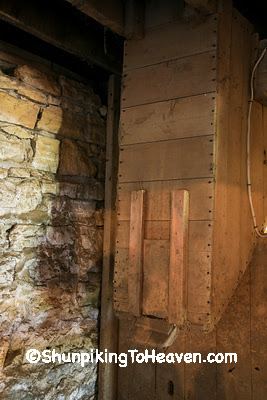 As Ruth and I travel along the backroads, we sometimes have the privilege of seeing the interiors of barns. And most barns contain at least a few chutes and a few ladders. The ladders are used to climb up into the hay mow. 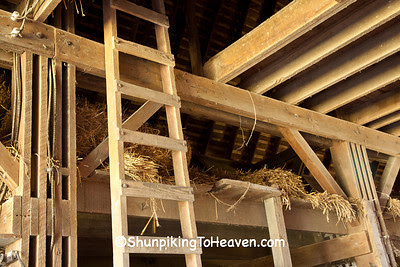 Open chutes like the one below are used to throw hay down from the hay mow to be fed to the cattle. Sometimes they are covered to prevent someone from falling through them. Most times, however, they are left open, requiring caution by farmers and their families and workers to avoid falling. 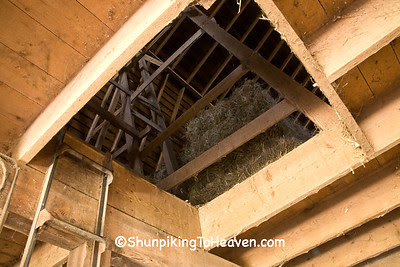 Ruth can attest to the need for caution with these open chutes because she actually fell from a hay chute as a child while throwing hay down for the cattle. She landed on her hands and knees on the concrete below. Luckily, she wasn’t hurt too badly.

Then there are closed chutes like the ones below, which are used to funnel grain down to the lower floor for feeding to cattle. Oftentimes, a large cart is parked below the chute to catch the feed. The cart is then wheeled in front of the cattle and they are given their allotted amount of feed. 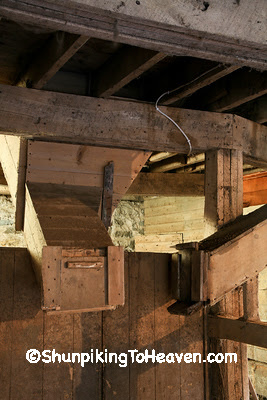 Both chutes and ladders are practical necessities. Sometimes they are primitive, like this hayloft ladder carved from a tree trunk. It still has the tree bark along the edges. 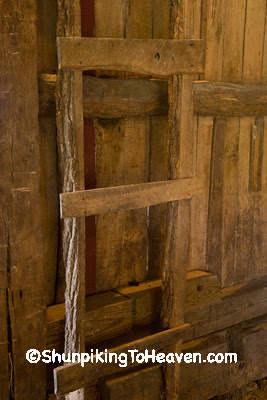 And sometimes they are more sophisticated, like this chute which houses an elevator for transporting scoops of grain. 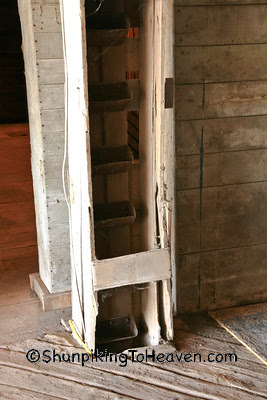 Sometimes they are short because that’s all that’s needed, like this short ladder to reach a loading dock. 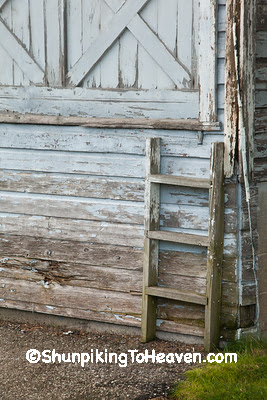 And sometimes they are very tall, to reach the upper portion of the hay mow. 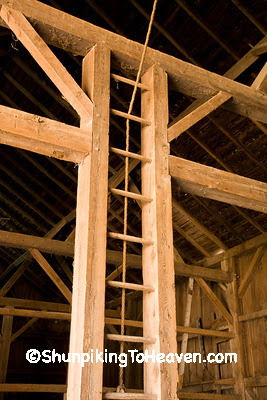 We always expect to find chutes in the barns we visit. But last year on the way to Ohio, we were surprised to find a chute at the Cherry Grade School in Bureau County, Illinois. In all the years I’ve been photographing rural architecture, I’ve never seen a school with a fire escape chute. 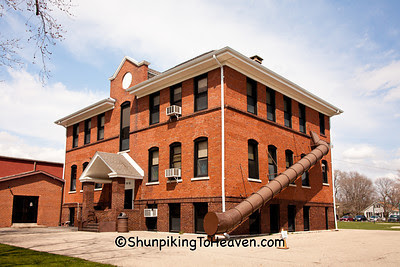 This fire escape chute was installed to allow the teachers and students on the upper floor to escape a building fire by sliding down to the ground below. In researching these chutes, I learned of one school where the students and their teacher used the chute to slide to the ground for recess. This allowed them to be very comfortable with the procedure should an emergency occur. 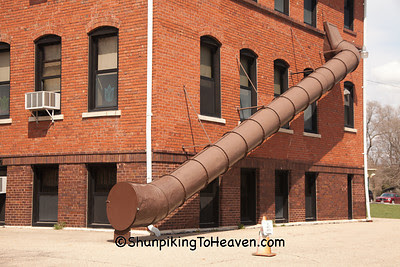 I also learned that some of the chutes did not have a door at the bottom like this one, so kids used them as slides during the summer. Sounds like fun!

February 2nd is Groundhog Day, the day when famous weather-forecasting groundhogs from across the country predict the arrival of spring. 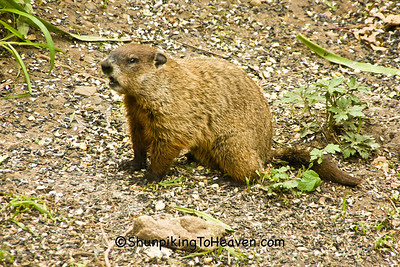 According to legend, if it’s sunny when the groundhog comes out of his burrow, he will see his shadow and there will be another six weeks of winter. 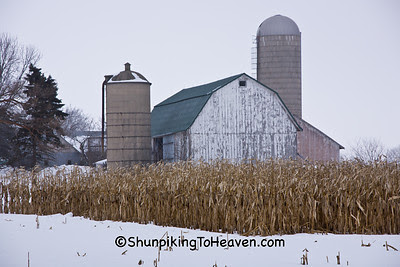 If, however, the day is cloudy and he doesn’t see his shadow, there will be an early spring. 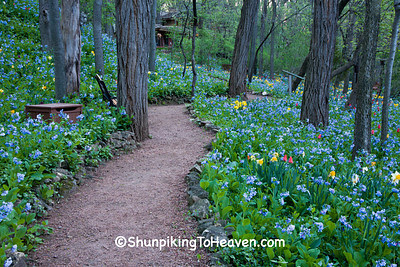 Groundhog Day has its origins in an ancient Christian holiday known as Candlemas Day, a day celebrating the midpoint between the winter solstice (the beginning of winter) and the spring equinox (the beginning of spring). This was the day that all candles that were to be used in the church during the year would be blessed. 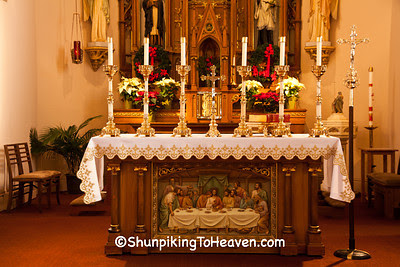 Pennsylvania’s earliest settlers brought with them the legend of Candlemas Day. They recited: “For as the sun shines on Candlemas Day, so far will the snow swirl until the May.” In Europe, they had watched for hibernating animals, such as badgers, bears, and hedgehogs, to come out of their burrows as a sign of winter’s end. German immigrants in Pennsylvania in the mid-1800s found an abundance of groundhogs, who also hibernate, so they began watching them to forecast the end of winter. 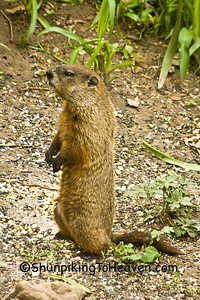 Groundhogs have a couple of other common names. One is the woodchuck. Almost everyone is familiar with the tongue-twister riddle, “How much wood would a woodchuck chuck if a woodchuck could chuck wood?” 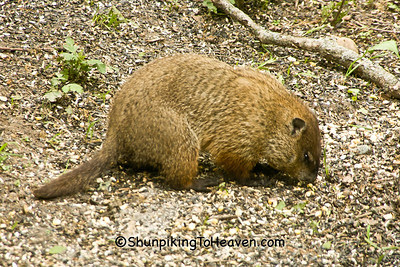 Groundhogs are also known as whistle-pigs because they whistle when they are frightened and also when they are mating. In 1990, the Doc Watson Family released a song called “Groundhog.” It contains the line “Run here Sally with a ten-foot pole, to twist this whistle-pig out of his hole.” Interestingly, that same year our dad and stepmom had their picture taken at the Groundhog Ball in Sun Prairie, Wisconsin, which is called the Groundhog Capital of the World. 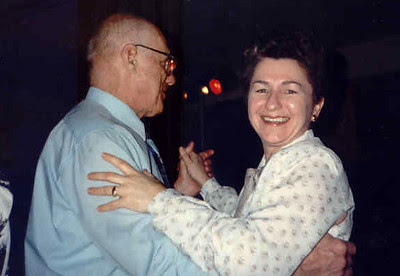 Many of you are probably familiar with the famous Pennsylvania groundhog, Punxsutawney Phil. Here in Wisconsin, we watch for the forecast provided by Jimmy the Groundhog. Jimmy has predicted an early spring for 14 of the past 20 years. This has been such a long, cold winter, so let’s hope he accurately predicts an early spring!