This year, over Memorial Day weekend, Ruth and I spent Sunday photographing to the east of where we live. We covered a few counties that day: Columbia and Dodge Counties in the morning, Washington County in the early afternoon, and Ozaukee County in the late afternoon and evening. Then we returned to Washington County, photographing our way into the blue hour until we finally had to give it up and head home. One of our late evening finds that day was an amusing homemade self-serve honey stand that used the honor system. It said, “Take the Honey, Leave the Money.” 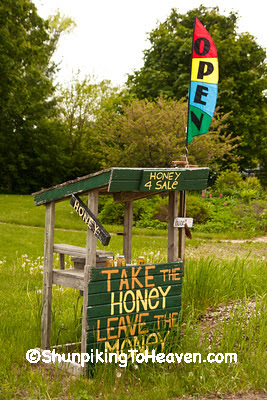 Neither of us needed honey at the time, but what we took with us instead was this image and the smiles it brought to our faces.

Our Lady of Lourdes Catholic Church

In June of 2010, on the fourth night of our marathon trip to Minnesota, we had motel reservations in Eau Claire, Wisconsin. The following morning, I had plans to get us to a stop at first light that we had been to before, but usually at the wrong time of day.

As usual, I had a lot of planned stops on the way south, and it was getting close to dusk as we cruised down a county road, more than an hour from our motel. And then Joann asked me if there was anything nearby that we might visit for the blue hour. The blue hour is defined as “the period of twilight each morning and evening where there is neither full daylight nor complete darkness. The time is considered special because of the quality of the light.”

Looking down at the map, I told her that there was a church not too far south of our location, but that was all I had marked for a long ways, and I didn’t have any information on what the church looked like. We decided to drive to the church and wait the little while until twilight. Luckily there was a cemetery next to the church where Joann could wander and photograph until the lighting was right for the church.

This was the site of the first Catholic Church in Barron County. That first church was a small log building. In 1895, the log church burned and a temporary church was built to replace it.

In 1902, the parishioners voted to build a new stone church. The stone for the church was obtained from an area east of the church called the “Blue Hills” area. Parishioners hauled 2,613 tons of red quartzite stone on sleighs during the winter of 1902-1903.

The stones were shaped by hand and were raised to the wall by a jinny powered by Shimon horses. (A jinny is a block carriage on a crane that sustains pulley blocks hung from an eyebar or crossbar). The interior of the church was competed and a statue of Our Lady of Lourdes was placed on top of the steeple.

The church was dedicated on November 17, 1904. The statue was later moved inside the tower and a cross was installed on top of the steeple.

The front of the church and the statue are lit with spotlights. We stayed until it was too dark to continue taking photos, and then Joann packed up her camera so we could head to the motel.

It was around 11:00 pm by the time we reached the motel and got checked in. Our room that night was the best of the trip, but as the front desk person was describing breakfast, Joann told him that we would be leaving before daylight the next morning. His response was a sort of stunned look and a laugh.

Although it was midnight by the time our heads hit the pillows, we kept our plans to rise the next morning at 4:00 am to catch the blue hour at a mill. No wonder we always return from “vacation” as tired as or more tired than when we left. But it’s all worth it when we review the photos we manage to capture.

Whatever your hobby is, we hope you enjoy it as much as we do ours.

Sometimes in our travels we are lucky enough to get inside barns. Often the barns have been cleaned up, and sometimes it’s like the farmer walked out of the barn one day and never went back.

One of the most interesting finds inside any of the barns we’ve visited were old fire grenades. These grenades were some of the first fire extinguishers. They were glass bulbs that were filled with a liquid. This type of fire extinguisher was manufactured for 40 years, from 1870 to 1910. 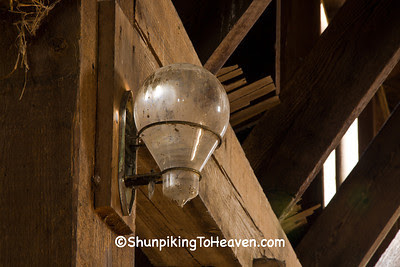 The bulbs came with a holder to be hung on the wall. They could be grabbed from the holder and thrown at the fire. The liquid inside would help to deprive the fire of oxygen. The bulbs were only helpful for small fires, or to gain a few minutes of time until other help arrived. Since these bulbs were for one-time use and very fragile, few have survived. 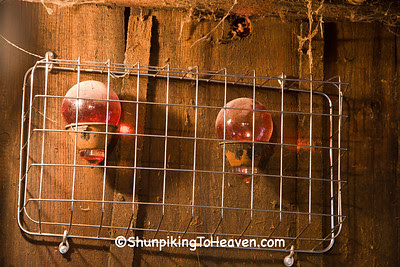 Considering the age of the bulbs, we were surprised to find any intact inside the barns we have visited. 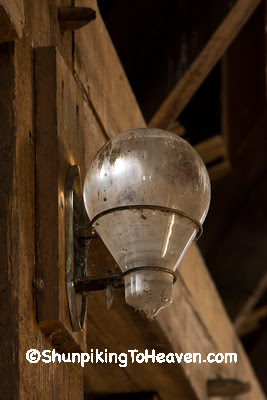 As always, we are happy to find these historic items and buildings, often hiding in plain sight.