As time marches on and the years seem to come and go at such a rapid pace, I feel that it is more important than ever, for me at least, to focus on what matters. There will always be a Christmas rush, with people hurrying to complete their Christmas shopping. But Christmas should be more about being with the people we love (in whatever form that takes) and doing things for them rather than the material things we give and get.

Grand gestures are sometimes nice but, as far as I’m concerned, it’s the little things that mean the most. And what seems like a little thing can sometimes be very significant. Listening and recognizing the feelings behind the words can be profound. Anticipating and meeting another’s needs without them speaking a word shows the kind of respect we seem to be lacking these days. And valuing others for their differences, rather than tolerating them or, worse yet, persecuting them, certainly makes the world a better place.

With each passing day, not just at Christmastime, but throughout the entire year, I realize how important it is to be grateful for so many things, especially those we take for granted. For example, the gift of eyesight to view all the beauty in this world, like wildlife or silently falling snow. 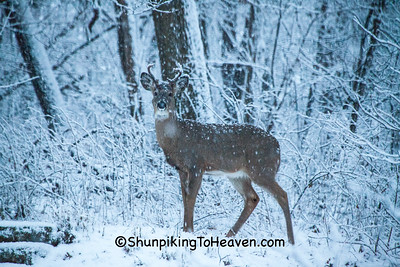 Or the gift of hearing birds gently welcoming the dawn or the almost deafening rush of a huge waterfall. 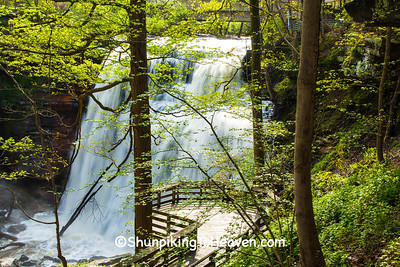 There is a lot of turmoil in our world right now, but I choose to focus on all of the gifts we’ve been given by God or the Universe or however you choose to explain some of the most beautiful and unexplainable wonders in this world. Beauty is all around us. All you have to do is let it in. This Christmas, I wish you the inspiration to do just that. 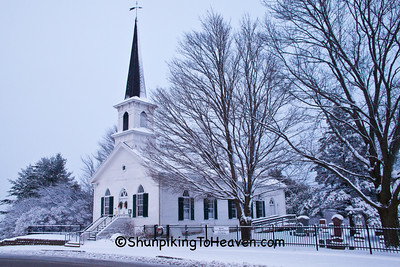 We’ve known for many years about the tobacco advertising on the buildings around the railroad tracks in Edgerton, Wisconsin. Edgerton became the center of tobacco growing in Southern Wisconsin when dozens of warehouses were built in the late 1800s to early 1900s. 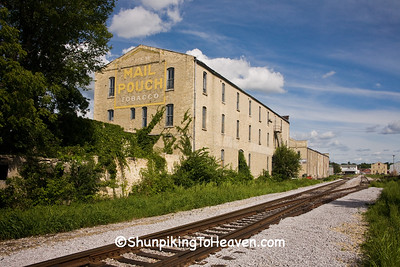 On Labor Day, 2011, we decided to spend the day photographing locally. Our first photos were of things on our list around Madison, Wisconsin. Often, we do this when we read in the paper that some historic business is closing or is in danger of being torn down. Such was the case on this day. But we finished in town early and decided to hit the highway and head for tobacco country to the south.

As we cruised down Highway 51 towards Stoughton, I was looking down at my notebook and the map, as I am often doing, trying to formulate a plan. And suddenly, Joann braked hard and told me to “hold on.” She was going to take the first opportunity to make a U-turn, but she didn’t tell me why. When I asked what I had missed, she told me that she had seen the word “CHEW” on the end of an old tobacco barn. 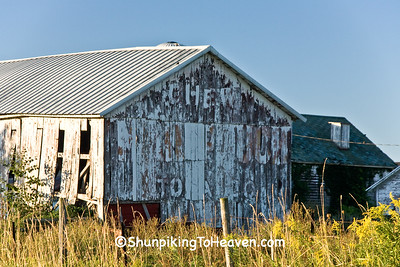 Well! All these years we had been discussing how odd it was that we didn’t find any tobacco ads on barns around southern Wisconsin, especially considering it had been the state's center of tobacco growing. And now, here was one that had been hiding for years beneath a coat of white paint. And it was along a state highway, which is where we had found them in our travels in other states.

We took a few photos and then continued on our way. As we drove the highway, we discussed that we should get the photos processed soon and report this find to the Mail Pouch Barnstormers group, which tracks all the Mail Pouch signs and their locations across the country.

For some reason, Joann didn’t get around to processing the photos and we didn’t revisit this barn until March 2017 when we were running an errand to Stoughton. Even though it wasn’t our normal route, we decided to take the highway again to check on the barn and snap a few photos.

After we finished our errand in Stoughton, we talked about taking a different route home, but something made us decide to go back up the highway. And boy, are we ever glad we did!

As we approached the location of the barn, we saw what we had missed driving south -- a large Mail Pouch ad painted on the long side of the barn. In the years since our last visit, more of the paint had flaked off all sides of the barn and this sign could be plainly seen. Again, we discussed that we really needed to report this to the Mail Pouch Barnstormers. But somehow, life always seems to get in the way. 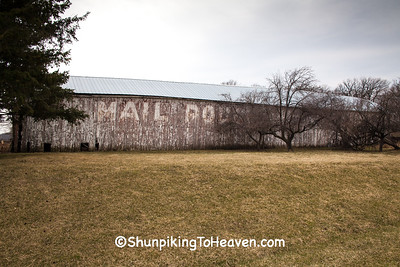 We visited the barn again in January 2019 to check on its status and to get some pictures in the snow. Luckily, the barn has a relatively new roof, but hadn’t been repainted to cover up the signs. We took more photos of both the end of the barn, which had the words “Chew Mail Pouch Tobacco” and the long side of the barn, which had the words “Mail Pouch” in large letters.

We feel the need to get as many photos as possible in case something happens to the barn. It might get torn down since it doesn’t appear to be used, or it might get painted over and the sign would again be hidden as it had been for many years. 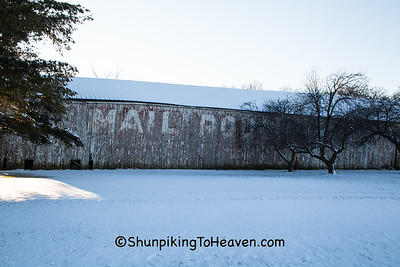 This also makes us feel like we should travel more of the highways around the tobacco towns in southern Wisconsin. What if there are other barns like this one? We usually try to stick to the backroads in our travels because highways are getting so dangerous and wide shoulders often aren’t available, but this sign definitely piqued our interest.

We know tobacco was grown in many counties of southern Wisconsin, so as you travel around on Wisconsin highways, keep an eye out for Mail Pouch advertising signs bleeding through on any old barns or buildings. If you find one, please let us know. And now that we finally have all the photos of this barn processed, we’ll be sure to let the Barnstormers know.