Last week, I told you about our visit to the Whipple Company Store in Fayette County, West Virginia. We had intended to stop there for a few minutes, but we were there for an hour or so, and probably could have stayed all day listening to the wealth of information Joy and Charles Lynn had to share about the coal miners and the Company Store. When we finally got back on the road, we traveled through the town of Fayetteville. And even though we were behind schedule, we couldn’t resist stopping to take a photo of this old fashioned Fayette Feed Company building, which is now the New River Bikes store. Then we continued along the scenic mountain roads of Fayette County in search of an old grist mill Ruth had planned for us to visit.

The mill is known as Cotton Hill Mill and it sits on the banks of Laurel Creek, a beautifully flowing mountain creek. The best views of the mill are from the busy highway, so we pulled into an abandoned gas station that was built over the creek (basically on stilts) just past the mill. 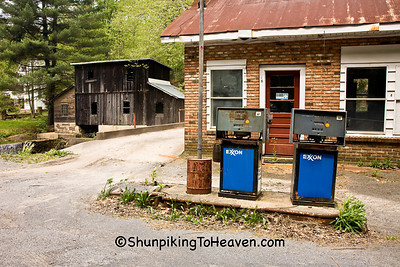 I pulled out my camera equipment and hiked back up the highway until I was above the dam. It was a nice view from there because there was a blooming redbud tree to frame my image. Then I walked back towards the car and set up my tripod to capture the view from below the dam. As I was finishing, a pickup truck pulled up and the man said, “So you like the old mill, do you?” 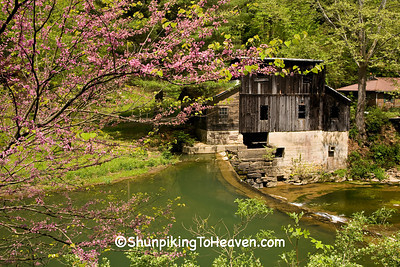 “Are you the owner?” I asked, hoping to learn more about this mill. His name was Gordon and he told me that he was the great grandson of the man who built the mill and that the mill had been handed down in the family. The millstone contained within the mill is dated 1845 and it was cut from stone taken from the Seine River in France. Gordon also said that he had been waiting for years to have the opportunity to buy the house next to the mill, which had also been built by his great grandfather. And he recently had the good fortune of acquiring the home. 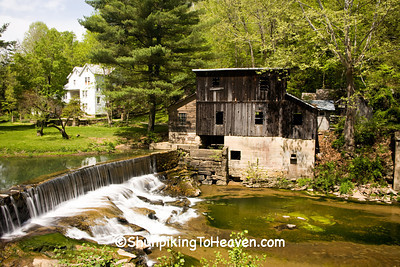 Gordon’s great grandfather was one of those railroad workers and he met Gordon’s great grandmother when he stayed at their boarding house. As fate would have it, they fell in love and he asked for her hand in marriage. Her father, however, wanted to make sure that this young man would be able to provide a good life for his daughter.

So he told the young man that he couldn’t marry his daughter until he could prove his worth. Upon hearing this, Gordon’s great grandfather purchased the land below the hill next to Laurel Creek and proceeded to build a grist mill to support himself and his bride to be. This land also had a log cabin on it and Gordon’s great grandfather built a house around it, which now belongs to Gordon.

I thanked Gordon for the information and for giving me permission to walk around the mill for a closer look and then we were on our way. As we headed toward Kentucky, we passed the beautiful Cathedral Falls. There is a small bridge over the stream where you can stand for a great view of the waterfall. So I took the following shot standing on that bridge.

But then I couldn’t resist trying to get close enough to capture the scene below. It meant hiking along the edge of a fairly steep embankment and then walking gingerly across many rocks in the stream, but I managed to do so without any mishaps. Meanwhile, Ruth was back at the car with her fingers crossed, as I’m sure happens often. 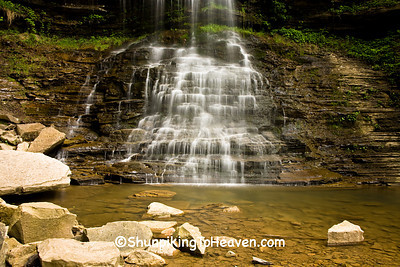 I hope you’ve enjoyed these stories from West Virginia. As I mentioned last week, we spent less than 24 hours there, but we gave it everything we had and we still have at least one more story for you from our travels there.

Posted by Shunpiker at 8:38 PM