Whenever we head out for a day of photographing, we always have an area and an agenda of sorts in mind. And in most cases, we end up capturing at least some of the things we had intended to photograph. But more often than not, we are rewarded with something that we never expected, something that touches our hearts, something simple, but profound.

On August 29, 2009, we began our day before dawn, exploring the Stoughton, Wisconsin area. At one point, we stopped at the Cooksville Store and I captured this patriotic flag scene. Around 4:00 pm, we started heading for home. Although I was getting very tired, we decided to go on a mission to photograph some weeping willows that someone had asked for. After completing our mission, it was close to 6:00 pm and I said, “I can’t wait to get home. I’m really beat.” But the universe had one more opportunity in store for us. 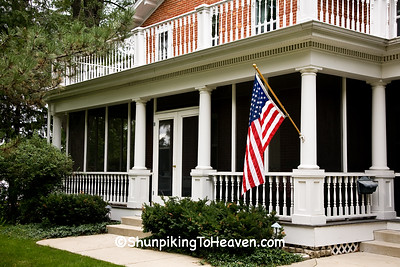 The quickest route home took us past a historical farmhouse that I had photographed before in the winter. This time, it had an American flag flying out front at the edge of the porch. I had wanted to find an old-fashioned porch scene with an American flag flying and here it was. I pulled over in a nearby parking lot and called the owner to ask if it was okay to photograph the scene. She graciously gave me permission and then explained that she had spent the day watching the funeral of Senator Ted Kennedy on TV. And when it was over, she knew she needed to display the flag in his honor.

As she explained this to me, I could feel how much Teddy’s death had touched her heart. I could feel the mourning of the end of an era and I was grateful that I was allowed to capture it with my camera.

Posted by Shunpiker at 9:45 PM