Yesterday was the start of the second half of April but here in Wisconsin, there have been only fleeting moments of spring. In fact, yesterday, it snowed steadily for about two hours where I live. And tonight they have predicted one to three inches of snow. I happen to love winter, but this winter has been one of the longest for me. It seems like spring will never arrive.

Last week on a chilly but sunny day, I decided to try to coax spring along by dragging out all of my hoses. As I placed the coiled hoses in the front of my house, I noticed a small patch of yellow, a small patch of white, and a tiny dot of purple in my woods. These small splashes of color amidst the brown carpet of leaves were too much to resist. So I headed to the woods to investigate.

The patch of yellow and the dot of purple were actually crocuses that had, I suspect, been “planted” by squirrels that stole some of my crocus bulbs and then buried them for a mid-winter meal. The patch of white was a fairly large and condensed group of bloodroot that had pushed through the leaves to soak up the early spring sunshine. What a welcome sight. I decided then and there that there was hope that spring would arrive soon.

Bloodroot, Hemlock Draw, Sauk County, Wisconsin
As I contemplated spring, I was reminded of a lengthy search two years earlier for what I now refer to as “the secret garden.” But before I explain, I need to share a quick “secret garden” moment at my own house. Shortly after I moved to this beautiful home, I decided to install a set of stone steps in the hillside behind the house. There are three tiers of steps, twenty-three in all, leading up to the woods beyond them. They’re very inviting and are often a topic of conversation when guests visit my home.

Stone Steps, Windchime, and Norway Maple, Dane County, Wisconsin
As my family and I dined on the deck, my niece Emily, who was quite young at the time, asked, “Aunt Joann, where do those steps go?” I said, in a rather hushed tone, “Oh, they go to a secret garden!” I had barely spoken those words when she jumped up and bounded up the steps. When she reached the top, she carefully surveyed her surroundings and then exclaimed in utter disappointment, “There’s no secret garden up here!” Alas, it was only the woods and all I could say was, “I told you it was a secret.”

Daffodils and Tulips, Dane County, Wisconsin
Okay, back to my story of the secret garden. Two years ago, I met a new friend who was interested in my photography. She especially liked my flower photos. Then one day she told me that someone had told her about a beautiful garden that was filled with the most colorful flowers, paths and benches, and that it was a public garden. She didn’t know exactly where it was but told me the general area.

Of course, I couldn’t resist the thought of photographing in this beautiful place, so I began to search for it. I didn’t think it would be that hard to find, but try as I might, I couldn’t locate it. When I asked my new friend if she could get better directions, she said she couldn’t remember who had told her about it.

All that spring, I continued to look for it and I finally found what I thought might be it, but it appeared to be private. I stopped at the house next to it, but no one was home. A few days later, I stopped again and found the owner working diligently clearing weeds from this beautiful garden. So I struck up a conversation and he told me that it was his wife’s garden. He also told me that I could come and photograph if I wanted to, but the spring flowers were about done blooming. So I had to be content with knowing that I had finally found the secret garden and could return the following spring.

Last year, from February to April, Ruth and I were hard at work preparing for our two-week photography trip to North Carolina. We were leaving on April 21 and I was hoping that we could experience spring in the south and then spring here in Wisconsin when we returned. However, last year spring came rather early, so I knew that I would again miss the blooming of the secret garden if I didn’t try to capture it before we left.

Spring Garden, Dane County, Wisconsin
So, on a workday a couple days before we left on the trip, I arose in the wee hours and got myself ready for work, except for putting on my work clothes. Instead, I put on my photography clothes (jeans, a shirt with pockets, and hiking boots). I checked and loaded my camera gear into the car and headed toward the secret garden. When I got close to it, I pulled off the road and parked the car because it was still dark. And then it began to rain.

I knew this was probably my only chance to get these photos, so I sat and patiently waited to see what the dawn would bring. Luckily, as the dawn arrived, it stopped raining and I parked my car at the far end of the garden to avoid waking anyone, grabbed my gear, and started to work as quickly as I could. I knew I only had about two hours before I needed to head off to work and I didn’t know if it would start to rain again. It didn’t and I managed to capture some great shots. 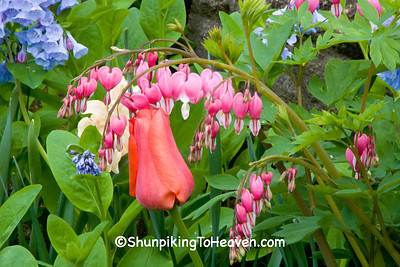 My niece, Emily, is now 17 and I should probably make amends for the trick I played on her by taking her to the secret garden. I guess that’s the least I could do.

Happy Spring and, as always, Happy Shunpiking!
Joann
Posted by Shunpiker at 12:32 AM