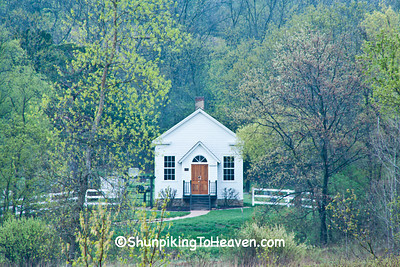 Hyde Chapel is a small, one-room white clapboard building nestled among the rolling hills and wetlands surrounding Mill Creek. It was built in the Greek Revival architectural style in 1861 by the English and Welsh settlers of the area. The church was formally founded in January, 1862. 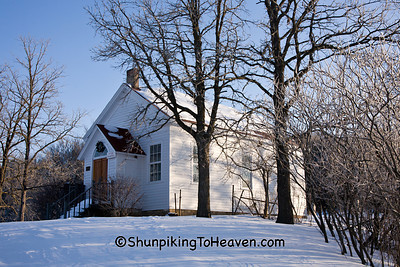 It appears that the newly formed congregation struggled in its efforts to grow the membership as there are no church records for roughly a decade starting in 1863. In 1874, a committee was appointed to secure both a preacher and a Sabbath School teacher. These activities created new interest in the revitalization of the church. It was painted and carpeted, and an organ was donated.

In 1878, on New Year’s Day, the church was rededicated as the Mill Creek Congregational Church. In 1880, there were 42 registered members and by 1884, membership totaled 53.

At some point, the church became known as the Hyde Congregational Church and by 1940, membership had dwindled to 22 members representing 12 families. Many of the descendants of the early pioneers had either joined churches in surrounding areas or moved away. In April of 1957, a decision was made to disband the congregation and close the church doors except for occasional funerals.

In 1966, Tom McCutchin, then a Hyde resident and president of the Hyde Cemetery Association, found out that the church was for sale. So UW wildlife ecology professors Robert McCabe and Clay Schoenfeld, who both trained with famed conservationist Aldo Leopold and who both owned recreational land near the church, purchased the building. Clay’s father and two uncles had each served the Hyde Congregational Church as ministers. With the help of Tom McCutchin, Bob McCabe and Clay Schoenfeld formed the Hyde Community Association (HCA).

The newly formed HCA held their first workday on Sept. 24, 1966. The men worked on scraping and painting the outside of the church while the women mopped and scrubbed the inside of the church. Window panes were replaced, worn pews were waxed, and a mason from nearby Ridgeway promised to chink the foundation.

On Dec. 18 of that year, forty members and guests turned out for the business meeting at which HCA became the legal owner of the church. The meeting was accompanied by carol singing and a table full of Christmas cookies and coffee.

There was also some reminiscing by older members who had attended church services there. Lance Dodge, the oldest member of HCA at 86, who had owned the local blacksmith shop and who was one of the men who discovered Cave of the Mounds in 1939, shared that the church at one time had two stoves, one on each side. The men sat on one side of the church and the women sat on the other side. The meeting was adjourned after the singing of an old hymn, “Blest Be the Tie That Binds,” which contains the phrase, “the fellowship of kindred minds.”

Ruth and I have visited Hyde Chapel many times in every season of the year. And we are grateful for the “fellowship of kindred minds” of the Hyde Community Association, and for its dedication to the preservation of this wonderful historic church, which was added to the National Register of Historic Places in 1988.

Posted by Shunpiker at 6:23 PM