Years ago, in the early days of my research, I found a book on Amazon about churches in Wisconsin and Minnesota. This was before the days of Amazon’s “look inside” feature, so I had no idea what I was buying.

When the book arrived, it was a tiny little thing with sketches of churches rather than pictures, and often the sketches were conceptual rather than architecturally correct, so it was hard to know what the church really looked like.

Among all the churches, one page in the book described a roadside grave marker for a baby. It was called “Isherwood's Cradle.” I marked it, but it was 2007 before Joann and I decided to see if we could find it.

It took some looking, but we did manage to find the location. It was in a tangle of underbrush, and we decided that there really weren’t any photos to be had. We continued on into the countryside and took photos of farms and other rural buildings.

We even found what we suspect was an old mill. The building sits on Flume Creek, but it was much too sunny that day, so it’s another location on our long list of places to revisit.

Since that time, we have started to hunt up unusual gravesites, so, as I was planning our trip to the Upper Peninsula of Michigan last fall, I asked Joann if she wanted to drive past again and see what we thought with our “new eyes.”

Driving slowly down the road, it was hard to pick out the cradle, but when we found it again, we also found that the site had been cleaned up. Much of the underbrush had been removed, so the cradle was a little easier to see.

The story that accompanied the sketch in my book was that an old man had told a farmer of his baby who had been buried at the edge of the road sixty years ago during a seven day blizzard. The baby had been born in the farmhouse and, sadly, had died. They couldn’t get further than the edge of the road, so the baby was buried in the ditch near a lilac bush. 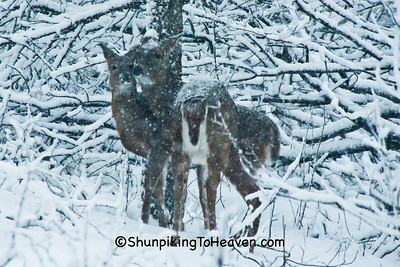 Feeling that the baby should be memorialized in some way, the farmer and his son crafted a marker in the shape of a cradle. On the four corners, they welded symbols of Christianity, Islam, Buddhism, and Native American spirituality.

They built a mound of native stone and placed the cradle on top of it. There is a small marker inside the cradle, but there is no wording to be seen on it.

I haven’t managed to find any additional information about this unusual gravesite. My book is 20 years old, and the story about this “cradle grave” said the man was old at that time. It also states that the baby had been buried sixty years before. By now, the man and his baby may be reunited in heaven.

The longer we enjoy this business of ours, documenting history across our beautiful country, the more lessons we learn. In this case, it was to document our finds in photographs when we first visit them. Even in Wisconsin, with so many locations marked to investigate, it’s often hard to find time to return. Luckily for us, when we returned this time, the site was in better shape.

Posted by Shunpiker at 5:00 PM