In the early fall of 2006, just after Joann bought her first digital camera, we planned a 3-day trip to Iowa. We had stumbled on some information about barn tours in the state, and decided that since you could tour the inside of barns, rather than just taking all photographs from the road, we would go and see what the tours were like. 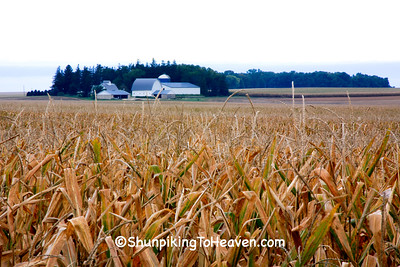 The tour was state-wide, so we decided that we would leave on Friday, photographing our way to the area where we were going to visit some of the barns on the tour. We would tour barns on Saturday and Sunday when the barns were open, then photograph on the way home. You probably already have an idea of how this went! We had only been to Iowa photographing a couple of times before this, so every area we went to was new to us. Iowa has many counties with Quilt Barn Trails, and we ended up chasing quite a few of those barns. 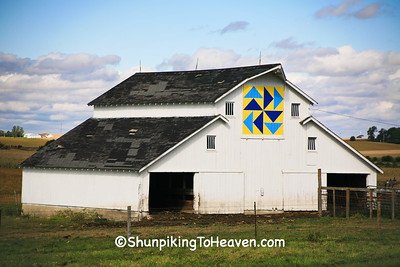 Barns on the tour open at 9:00 A.M., but we like to get out early, so we had to find something else to do until the barns opened. On the second morning, we left our motel and headed to the historic Fields stone barn outside of Cedar Falls. 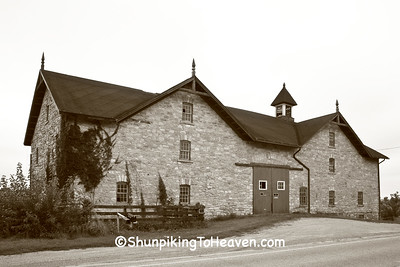 This historic limestone barn was built in 1875 by William and Charles Fields, and once housed prized stallions. By the time I found out about the barn, it was already starting to crumble in the back, and I knew we had to visit at our first opportunity.

There were rumors of a tunnel from the barn to the farmhouse, which was reported to be a stop on the Underground Railroad, but no tunnel was ever found.

Sadly, the barn continued to deteriorate, and even though locals tried to find funding to repair the barn, it was demolished in December of 2008.

We made our way to Story County and visited the Handsaker barn. Finally we were at a barn on the tour! It was a square barn built in 1875. A table in the downstairs of the barn was covered with many containers of cookies and bars. The treats were baked by the barn owner, who was getting up in age, and didn’t come out to the barn. Her family members were answering questions about the barn and offering the treats. 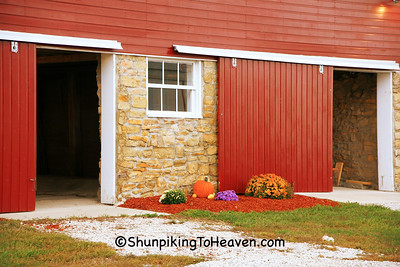 The barn also had a barn bridge leading to the second story. These are less common than the traditional bank barn with an earthen ramp. 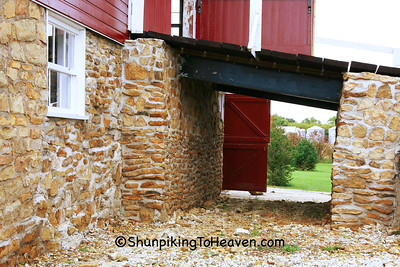 We stayed Saturday night in Pella, and the following morning, we didn’t have a set destination for our starting point, so I picked a road heading east and we took off. 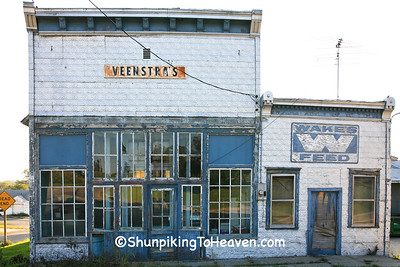 We were lucky enough to stumble on this old feed store. It had such a unique front on it, and all of the windows were still there. 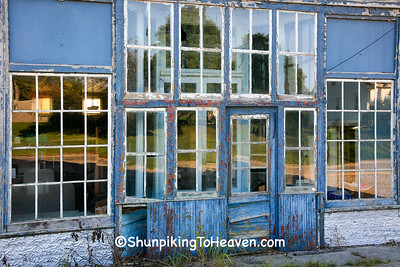 We had the location on our wish list to return to, but by 2010, all of the windows were boarded up with plywood. Recent pictures from 2015 show the building still standing, and still boarded up. Again, we were so very lucky to have found the place with the windows and doors intact.

We did manage to visit a couple more barns on the tour as we headed towards home. We also discussed our approach to these trips and decided we should try to make it to as many barns on the tours as possible on our trips. 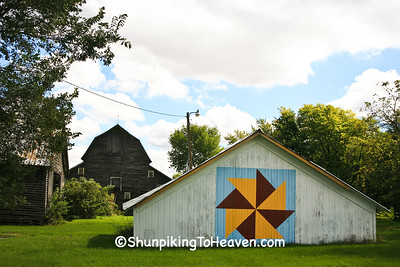 For several years, that’s exactly what we did. And then we figured out that we were driving too many miles and passing up other opportunities. So, we’ve come full circle, and we pick an area, try to fit in as many barn tour barns as we can, but also stop at other interesting things while we’re in the area.

If you’re interested in the barn tours, you can find information at the Iowa Barn Foundation website. The spring/summer tour is this weekend, June 10 & 11. If you don’t mind hot and humid, and have no weekend plans, you could go and check them out. (We had planned to go, but we both hate hot and humid!) These are some of the only barn tours we’ve found that are self-guided rather than paying a fee and riding a bus to the barns. This way you can stay as much or as little time as you would like at each barn.