This past summer, the town of Cooksville celebrated their 175th anniversary. The whole town is listed as a historic district on the National Register of Historic Places. It was the second district in Wisconsin to be listed. (The first was Mineral Point.)

One of the main buildings in the historic district is the General Store that was built circa 1846. It is believed to be the oldest general store in Wisconsin.

The store building was built, and is owned, by Waucoma Masonic Lodge No. 90, which meets on the second floor above the retail space. In all the years we’ve visited the store, we were unaware of this fact, and never noticed the globe light with the faded masonic symbol on it.

Cooksville and Waucoma were two towns adjacent to each other. The two villages were settled by people from New England, New York, the British Isles, and later, Norway. The combined villages became known as Cooksville because of the post office’s location. The planned railroad bypassed the town and instead went to Edgerton and Stoughton, and Cooksville became “the town that time forgot.”

The town was set up like a traditional New England town with a public square or commons. The original one-room school was built about 1850 and was made of brick. It sat on the commons but because of structural problems and its small size, it was replaced by the current wood frame building, with its bell tower and two entry doors. The two doors, one for girls and one for boys, were a traditional New England-Puritanical design. 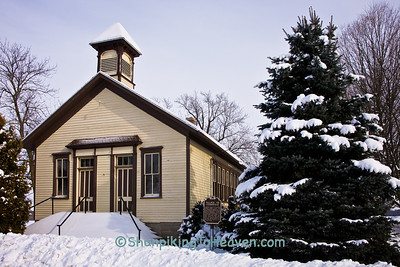 When all of the rural schools were consolidated in 1961, the Cooksville School closed. The following year, the Cooksville Community Center was organized, and still uses the building today.

Behind the school, the old witch’s hat merry-go-round still stands.

The town also includes two churches. The first is the Cooksville Congregational Church, which no longer has an active congregation but can be used for weddings and events. The architecture of the church, including the cupola and spires, had been altered over the years, but were restored to their original glory. It is “the little brown church on the corner,” since it sits at the intersection of highways 59 and 138. 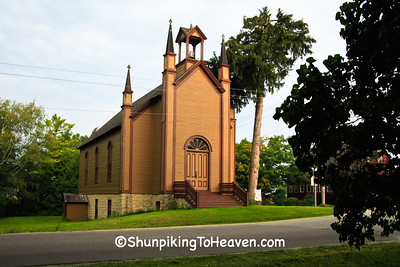 The second church is the Cooksville Lutheran Church, which still has an active congregation and recently celebrated their 125th anniversary.

Over the years, Cooksville had many blacksmith shops. The only one remaining is the William Graves Blacksmith Shop. It was built around 1886 and was attached to the Blackman-Graves house. By the 1960’s the house was in ruins and finally collapsed in 2000, and the attached pink-cream brick blacksmith shop was also badly deteriorated.

But in 2010, the mostly collapsed building was faithfully reconstructed on the original site using the salvaged original pink-cream brick. It is now the only historic “blacksmith shop” in the village. 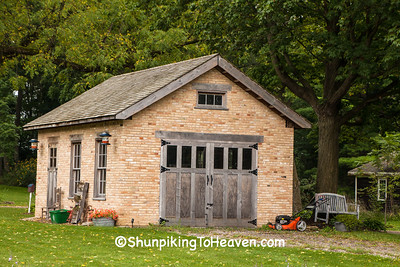 Grave’s Blacksmith Shop, Cooksville, Wisconsin
If you find yourself near Stoughton or Edgerton, it’s worth the short drive to Cooksville to check out this historic town. And don’t forget to stop at the general store for a cool drink, an ice cream cone, or some baking supplies.