March 4th is National Hug a GI Day, a day to show our appreciation to GIs, the people who serve in our armed forces, with a friendly hug. And it nudges me to tell a story of a veteran we met in Rockford, Illinois on the first day of last year’s spring photography trip.

It was April 23rd and the day was a sunny, blue-sky kind of day. We left home mid-morning and headed south, crossing the Illinois border a little before noon. After visiting historic Macktown, one of the earliest settlements in northern Illinois, we drove into downtown Rockford. First, we photographed some old neon signs and then we parked in front of the Veterans Memorial Hall and Museum. This building is also known on the National Register of Historic Places as Soldiers and Sailors Memorial Hall. A memorial stone in front of the hall says: This memorial hall, the first of its kind in the United States, dedicated to our veterans of all wars, was completed in the year 1903 with dedication ceremonies on June Third of that year by our twenty-sixth President Theodore Roosevelt with these words: "No more fitting memorial could be erected to the men who fought than a hall such as this.....a hall beautiful because of the uses to which it is consecrated."

After capturing a few photos of this beautiful hall, I walked down to the corner where there was a veterans memorial, entitled “Victory.” The sculpture, by Gene Horvath, depicts men and women of diverse ethnic groups from all branches of the services. 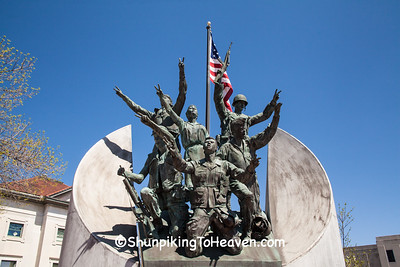 The plaque below the sculpture reads: “To all Veterans, to our neighbors and friends, to the men and women who served in every branch of the Armed Forces in time of war or peace, we dedicate this memorial. Remembered here before us are brave veterans from World War II, Korea, Vietnam, and the Persian Gulf conflicts. United by love of country and service to each other we celebrate our ethnic diversity as we salute each individual’s victory of courage over fear and hardship. We will not forget our comrades who died.” 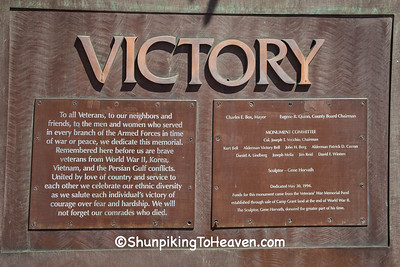 He told me his name was Mark and that he was a veteran who had served in the Persian Gulf War and that he had suffered injuries and was a Purple Heart recipient. So I told him to stand in front of the sculpture and as I snapped a couple of pictures, he held up his hand and sang some kind of marching tune. I only wish I would have thought to take a video.

When the photo session was finished, Mark told me that everyone called him Smiley, which was a great name for him because he had been smiling the whole time. He said everyone at the Veterans Memorial Hall knew him. Then he told me it was his birthday that day and he was wondering if I could spare a little change because he was on a mission to collect enough change to maybe get a motel room for the night and “watch a little TV.” He said he needed only another $13 to make that dream come true.

I wished him a Happy Birthday and told him I didn’t have any change on me, but if he wanted to walk back to the car with me, I would give him something. On the way back to the car, he told me that he was homeless because the injuries he had suffered in the war made it hard for him to work. I could see that he was having trouble with his feet and with his eyes.

When we got back to the car, I put my equipment away and Mark continued to talk. He gave Ruth and me his full name and rank and then talked about the war and the injuries he had suffered. As he talked, I grabbed a small notebook and wrote down some notes. Of course, I couldn’t help but wonder about the truth of all this, but it didn’t really matter.

Here was a fellow human being a little down on his luck, but still as good-natured as could be and who had such hope that by nightfall he could collect enough change to get a cheap motel room with a TV. 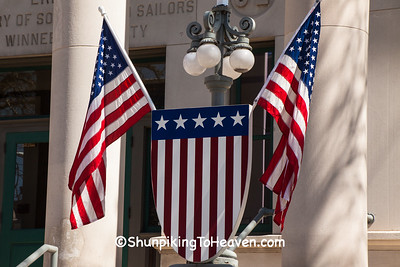 I reached for my wallet and took out a $20 bill. I handed it to Mark and said, “Happy Birthday, Mark. Get yourself some lunch and enjoy that motel room tonight. He looked at the money in his hand and tears filled his eyes. Then he hugged me and said, “No one has ever been this kind to me. Thank you so much.” As he headed down the street, Ruth told me that all he had asked her for was a penny. And then we laughed as we heard him say, “Now I can even get some chips!”

Whether you do it in person or through email, text, or social media, give a GI a hug!

Posted by Shunpiker at 9:52 PM