In the spring of 2014, Joann and I were on a photography trip to Kentucky. One place we wanted to visit was a memorial to a mining disaster that occurred back on December 30, 1970.

Forty-eight years ago, 40 miners left their families to work in the Finley coal mine at Hurricane Creek, outside of Hyden, Kentucky. Just after lunch, an explosion rocked the mine. Thirty-eight miners were inside the mine.

One miner, A. T. Collins, was the lone survivor of this tragedy. He was just returning to the mine when the explosion occurred and was blown back over 60 feet. He is honored with a plaque on the statue of a miner at the memorial. The plaque says, “A.T. Collins, 1923-2007, Survived by his wife Dora, four children, six grandchildren, and two great grandchildren. He worked as the beltman. He was the lone survivor of the tragedy and was blown over 60 feet out of the mine.” 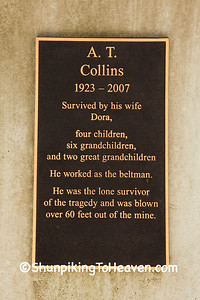 The memorial consists of 16 gates along a winding path that leads to the full memorial. On each post is a bronze miner’s hat representing one of the miners who was killed.

The hat above honors James Minton, Age 27, survived by his wife Geraldine, and his daughter, Sondra, two years old. He was a veteran, having served in the Army for three years. He performed in musical groups on many occasions. He lived in Manchester.

Honoring Theo Griffin, Age 28, Survived by his wife Martha, and daughter, Sandra Carol, 6. He lived on Paces Creek in Clay County. He worked in the mines for four months. His brother-in-law, Jeff Spurlock was also killed. 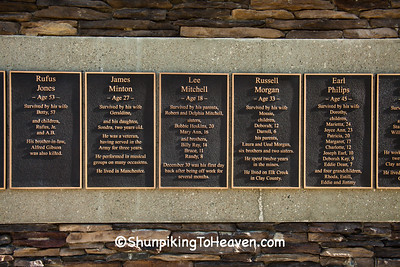 At the back of the memorial is a long row of plaques with information about each of the miners who died in the explosion.

As you walk along reading the plaques, you see that many last names are repeated. For example, brothers Arnold and Armond Wagers were both killed in the explosion. Another Wagers is listed along with them, but doesn’t include any possible relation. 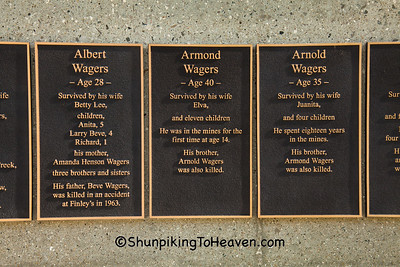 All in all, 65 children were left without fathers at the end of the day. Thirty-eight families were changed forever.

The most interesting thing about this memorial, besides its size and detail about the men who died, is that it sits at the site of the sealed mine.

The whole time we were at the memorial, we were the only ones there. It was a very serene place to spend some time honoring these men who perished just trying to make a living for their families.

If you get a chance to visit this or other memorials, we encourage you to do so.

Posted by Shunpiker at 5:52 PM